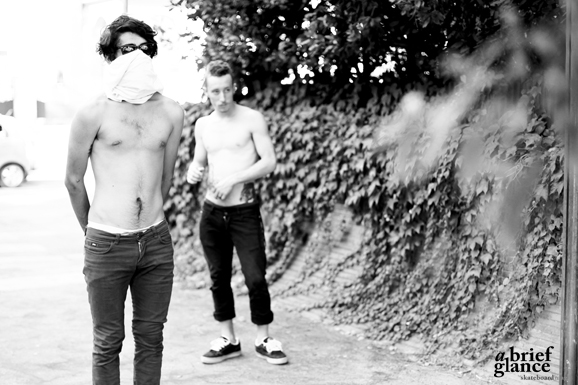 After the premières held in Milano, Barcelona and Berlin, Murder clothing has just announced that their GENERATION WASTE video is now online.

Full article about the making of GW video on abg issue / 16. 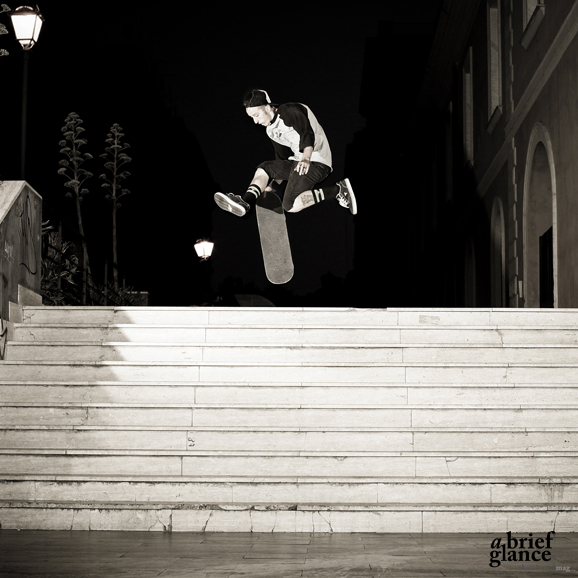 Yo dude, how are you?

What can you tell us about the Murder video? How much blood did you give?

The murder video is dope, personally I like it a lot and I’m honored to have contributed to it. Blood? Yeah, lots of it… but that’s the nice part.

You traveled to a lot of different locations to make this video, and for a small company that is pretty unusual…

Yup, we spent a lot of time traveling around… it was an incredible opportunity. Giulio invested large sums of money and time in this video… it is something not everyone would do.

Do you feel supported by Murder and your other sponsors?

Very much indeed. Before becoming part of the team I didn’t believe there was a company like Murder in Italy… and I have to admit that I’m super happy to be part of the team. If all the sponsors were like this in Italy, the scene would definitely be better. I’m really happy with my other sponsors as well, Fallen and Planet Riders Shop.

Do you think after this video comes out you’ll be able to live off of skateboarding?

Surely… you can come and live with me in my new 7-story mansion, we have 12 different prostitutes each day, a bowl made of solid gold and tons of beer. What questions are you asking?! Ha ha ha.

Last year you moved to London during the winter to work and skate. Where will you go this year? Oslo? Helsinki? Or some other place with a mild winter?

Ha ha ha, well the work situation in Italy is critical, especially for someone like me who wants to skate, so I decided to emigrate. Well, anyways this year I think I’ll become a Londoner again. Maybe when summer comes, what do you think?

You’re not a technical skater but you spit blood for every trick, and you like skating big with grabs and crazy grinds. I’ve never seen you back away in front of big stuff, why do you like skating like this, and don’t you ever think: this time I’m going to get hurt?

Every time I think: “I’m gonna hurt myself,” it happens… so it’s better not to think it, and anyways I’m a nigga inside bro.

How do you think people will receive your video-part, are there any things you weren’t able to film or tricks you left hanging?

I’m not sure how it may be received, I’m always very self-critical, so I think I could have done better, but at the same time I’ll say I’m satisfied because I had little time to work on my part. I filmed it in 6 months, all in a hurry ha ha ha.

You live in a place not particularly notorious for skateboarding, and kind of far away from the “scene”, even though the scene really doesn’t exist. How do you organize yourself to get footage?

To produce footage? I travel at least 6 hours by train and countless others by car or bus… if you really want things, then they happen.

During the last few years I’ve seen you skate hard on transitions, while before you were 100% street. Why did you start skating everything and not limit yourself to skating your favorite “stuff” (gaps and firecrackers)?

Because I get bored easily, and on trannies you go faster. That’s all. It was simply something new, maybe if I had had a pool growing up I would have skated that from the start, but I had to adapt to what there was. In London I had the chance to skate trannies and learned the four tricks I know how to do.

If I buy you some firecrackers, will you ollie the Padenghe Big 5 naked?

If you add 5 euros to that and a beer I’ll do it in my underwear, I’m serious. 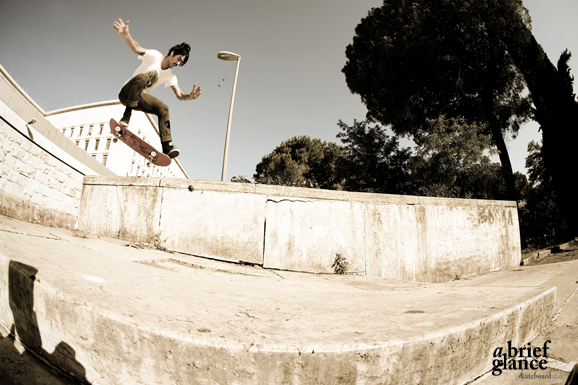 Goodmorning faggot, what are you up to? Are you drying your hair?

Yes, dried and waxed more than a park ledge.

Let’s talk about serious things, when did you start filming your video-part for Generation Waste?

I think two years ago. It all started with the first tour in California in February of 2010, but between problems along the way I probably filmed like a year and a half.

How much effort did you put into it and how much pressure did you feel?

In 12th grade everybody was thinking about what university to go to… while I was busy imagining what part of Europe would be cool to go film with Sket. I put all the passion and commitment I possibly could. We didn’t stand still for one second and in two years we traveled, skated, filmed, and lived life to the fullest. To be honest I never really felt any pressure on me to produce footage because it all felt pretty spontaneous to me to skate as hard as I could. I felt some obligation because Murder made available a budget so large it was never seen before in Italy, and I will be grateful to them for life.

What do you expect from this video? More sponsors or more teen-age fans?

Besides underage fans, it would be cool if skaters realized that we tried to expand our horizons as much as possible, both geographically and mentally, and refused to skate our home spots. We literally went everywhere in order to confront ourselves, test ourselves and find new inspiration. This is the spirit with which the video was made, and it is not by chance that our first tour was to California. The message comes first, then sponsors and getting laid. Thanks, Giulio.

Since Dylan Rieder has become your follower on twitter, are your ollies higher? Do you feel like a satisfied groupie?

Hahaha! I didn’t stalk him, he added me…we liked each other. I won’t hide the fact that I really appreciated even such a small gesture on his part.

You traveled a lot to film, what are the places you found most satisfying?

The various tours to Barcelona were probably the most productive and fun… we went back like 3 or 4 times. We were there twice for one month and Murder rented a house for us in Plaza de Espanya… we lived real skateboarding every day and had the chance to appreciate life’s pleasures.

Why did you choose to put all this effort into skateboarding, when you could easily do anything else and live with more cash and less pain?

I’ve always considered skateboarding as an art-form, and art constantly needs new stimuli and new experiences. My life is dedicated to doing this, basically. Primarily, I follow my inspiration and try to travel as much as possible, getting to know and live new experiences. Taking part in contests around, skate new spots, make new friends, new contacts… tell me why I should stay at home when there is a whole world out there?

Try typing your name in google-images and some appalling photos and interviews will pop up. I love you for this. How much time do you spend choosing your outfits? Do you do it purposely to distract us from the fact that you suck at skating?

Everyone criticizes my outfits, and it is proper for them to do so; I really don’t care what other people think of the way I dress. I have a very personal aesthetic taste and have much care for my clothing. For me, aesthetics is more important than fashion, brands, trends, and all this bullshit… I see a skater’s attitude even in his aesthetic taste, manners, approach, and the style he has when skating. You guys are free to be how the fuck you like…

What makes you feel good. What are the necessary things for you to feel good and motivate you to skate?

All I need is to set foot on my board in order to empty my mind and see everything dissipate around me. Having a perfect feeling with my board makes me feel good because it means I am at peace with myself and am able to fully express myself.

You have been around quite a few years, you have many fans (teen-age), you skate well and put in a lot of effort. You travel everywhere there is something to skate, and you are, so to speak “sellable” image-wise. Do you think at one point it will be possible for you to live off of skateboarding alone?

It seems a bit utopian, especially in Italy in the year 2012, even if I have to admit that with Generation Waste at times I’ve had the illusion that the reality you’re talking about may come true.

Tell me something really deep and intelligent to end this interview.