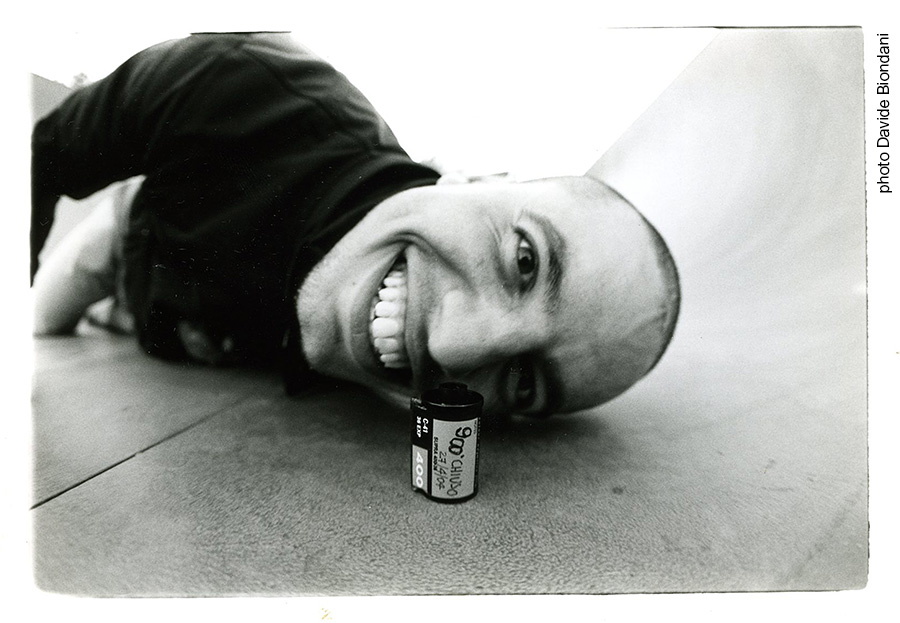 Leaving home to go to California to pursue your dream of becoming a professional skateboarder is pure madness. Doing it in 1991, leaving from your small village in the Italian countryside, at the age of 15 barely speaking English, was something mathematically impossible. Giorgio Zattoni made the impossible, possible. Giorgio Zattoni is one of the most determinate person I know. In 1991 at the age of 15 he left Italy and went to California to pursue his dream of skating. Back in the early 90s California was was far more distant than the 10,000 kilometers that separate it from Italy: no internet, no face time, no emails, no google maps, no social medias… the only way to get in touch with your contacts overseas was a pre-paid phone card, or and hand written letter. Giorgio went there alone, barely speaking English and with just a connection with Powell Peralta through the Italian distributor. Thanks to his determination, he got his first board for Powell Peralta (not a random skate company) in 1992, turned pro for Vans, and started traveling the world for the next years skating; got his second pro model for Powell in 1998, gave his name to a trick “The Zattoni Flip”, was the second person in the history to land a 900 a few time after Tony Hawk, and contributed to bring skateboarding to a higher level. He’s still skating and charging flying two meters above the coping of his giant vert ramp or grinding the pool coping of the Adriatic Bowl. He set his life for skateboarding so he can skate every day. To pay homage to his amazing skateboarding and dedication Powell Peralta released the reissue of “The Crusader” one of the two pro-model Giorgio got in 1998 and a special documentary by Stacey Peralta.

What’s the story behind the reissue of your board from 1998?

One evening while on the sofa I received a call from John Oliver from Powell Peralta who told me that while they were tidying up the warehouse they found a lot of old tapes from 1990 onwards with my name written on them, containing clips of me skating with Frankie Hill and the rest of the Bones Brigade at the Powell Skatezone, so Stacy Peralta decided to make a documentary about me.
I recovered some footage that I had never seen before from the Armageddon Ramp days, and then we filmed a few things with a Red Camera at Rando’s Studio in Ravenna and at the Adriatic Bowl. The documentary is ready and will be out soon as a “Stories By Stacy” episode on the Powell Peralta web site. That said, a few weeks ago I received a low res photo of the new Powell Peralta products via what’s app and was checkin’ it out with my wife Bianca. The photo was very blurry and after I switched off my phone Bianca said to me: “Didn’t you notice anything strange? Did you see the new board series?”I reopened the photo and saw that they had reissued my 1998 pro model. I was speechless! Unbelievable. An amazing surprise!

When was the original board released? 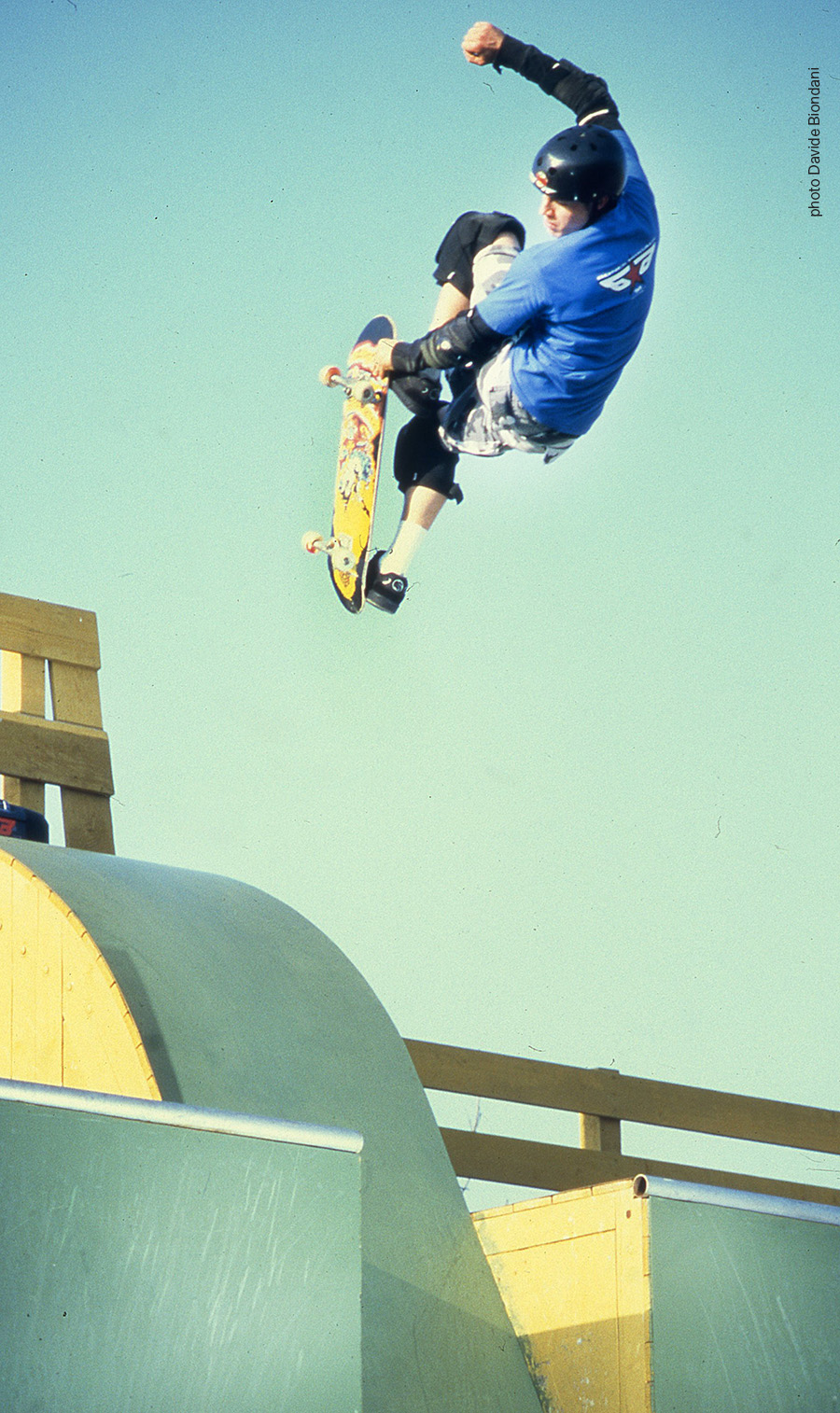 Frontside lien over the channel on the og “Crusader” board.  Marianna Skatepark 1998.

At the time they had put out 2 different graphics, the “Crusader” designed by Tanner Goldbeck, which is the one they just reissued, and the “Medallion” designed by my friend Enrico Stradaioli. He still has the original hand-drawn graphics of the board in a 1:1 scale at home.

How do you feel about the reissue of your board?

It’s unbelievable. It’s a life goal that equates to having landed the 900. Having my pro model reissued by Powell Peralta, a brand born in 1974 that together with Santa Cruz, Vision, Schmitt Stix and other companies has made skateboarding history… is just priceless. It’s not like creating a brand with your friends and having a pro model board as often happens today. Powell Peralta is different for its history and its background… for me it’s just unique. After 22 years, this board represents a form of reward for all the energy I’ve spent and for all the sacrifices I’ve made for skateboarding. Looking back, my generation came after that of Cab, Hosoi, and Chris Miller… the guys I looked up to; and they looked up to the prior generation of skateboarders like Tony Alva, Jay Adams, and Steve Olson who were among those from which everything started. Before them skateboarding did not exist. It’s like feeling part of something you have always believed in and to which you have dedicated your whole life.
Having a board for Powell Peralta is a reward of inestimable value and means so much to me. If I had to choose between a 100K contract to skate for a shoe brand and this reissue board I would have no doubt… my choice would be this board.
It’s something that only those who lived that era of skateboarding can fully comprehend; it’s harder for the new generations to understand these aspects. That’s why it’s very important to explain and transmit to them the roots of skateboarding and its original spirit, which represents the antithesis of what skateboarding is becoming today. 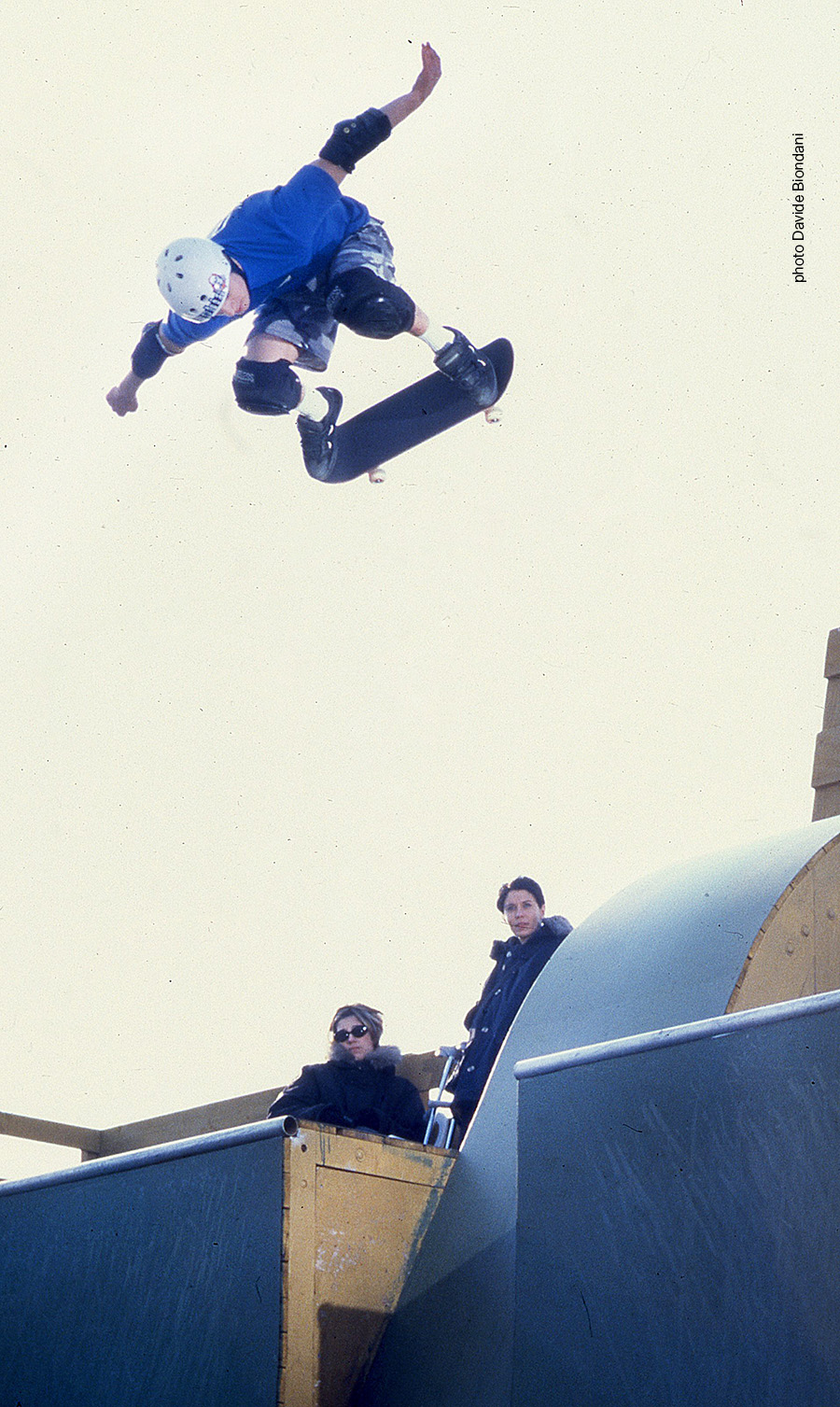 Backside over the channel, on the same day as the lien air . Marianna Skatepark 1998.

How was being a professional skateboarder in the 90s?

You had to spend at least six months a year in California to skate, shoot photos and advertisements for magazines, film for videos, do contests and go on tours. You had to live in Cali. There were very few Europeans skating for US brands. After the late 80s wave with Claus Grabke, Bod Boyle, Steve Douglas, and Nicky Guerrero… and the mid 90s wave with people like Manzoori, Jan Waage, and Sami Harithi, skaters like Glifberg, Penny, and Rowley began going to the States more and more often after Flip started. At the time, traveling was very different from what it is today. Back then you had the higher cost of the flights, the language barrier and the difficulties in communicating (for me at least). You had to buy a prepaid card to call home, while now you can just face time with your family or friends whenever you want. It was completely different. Most of the European skaters were from Northern Europe, where skateboarding had a long tradition and the level was not that far from the American one. Italy had a 20-year gap compared to Cali, and was definitely much farther away than the 10,000 kilometers and the 15-hour flight it actually took to get there.
I was there alone, and I wanted a pro model. I was there for that. I lived for that, it was a dream that I wanted to achieve at any cost, but you had to earn it! All the more if you were a European skater. 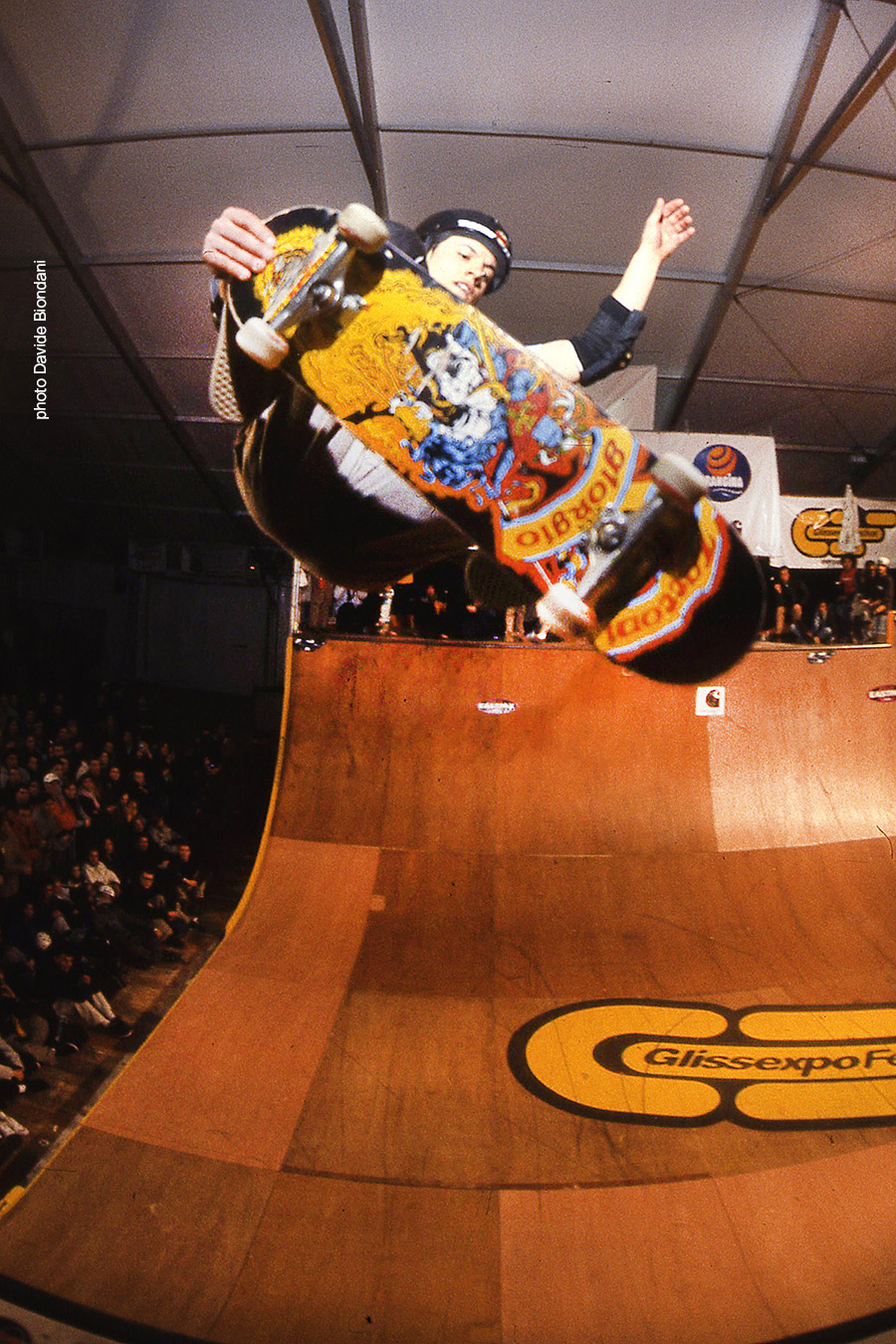 Frontside ollie tail grab  on the og “Crusader” board. France 1998.

How did it eventually happen?

As I said, I already had a pro model in 1992, but in the mid 90s Powell Peralta stopped producing pro models as a marketing strategy. The team riders wanted the pro models though. During contests or skating at a vert ramp for example, we’d see the other pros with their own boards and we wanted to have ours too. I mean, for our generation pro models were something important. Do you remember the first time you went to a skate shop and bought your first board with a name written on it? You probably asked yourself what that name was and what it represented, so you started documenting yourself and reading skate mags in order to discover who and what was behind that board. It’s something that leaves a mark and stays with you.
In 1996 I was already living in Cali, getting photos and interviews in Transworld Skateboarding, Thrasher, and Slap. I was doing good at big contests like X-Games or Hard Rock Café. I was pro, but I didn’t have a pro model because Powell was not making them. Then in 1998 they finally changed their strategy again and I got my board! I was so happy.

Any funny story behind it?

This one is funny; I loved to go to the Powell woodshop and stress out Chris Iverson (Engineering Director) about board shapes and sizes already in 1992 while filming for the “Chaos” video. I used to skate at the Powell Skatezone a lot with Bucky Lasek, Frankie Hill, and Wade Speyer. I was 14 years old and looked up to Bucky a lot. His skating was a big inspiration to me. He did these sick ollies on the mini ramp and I tripped out on them. I noticed he always had his toe off the board, and I really wanted to do ollies with the toe off my board too. But I have small feet. So I went to the woodshop and forced Chris Iverson to cut me like a 6.78 inch board. He tried to explain to me that it wouldn’t work but I still wanted it. When I set it up my trucks were wider than my board. It looked like a dragster! Ha ha ha. We laughed at my board the whole day, and of course it didn’t work, but it was good fun, ha ha ha. 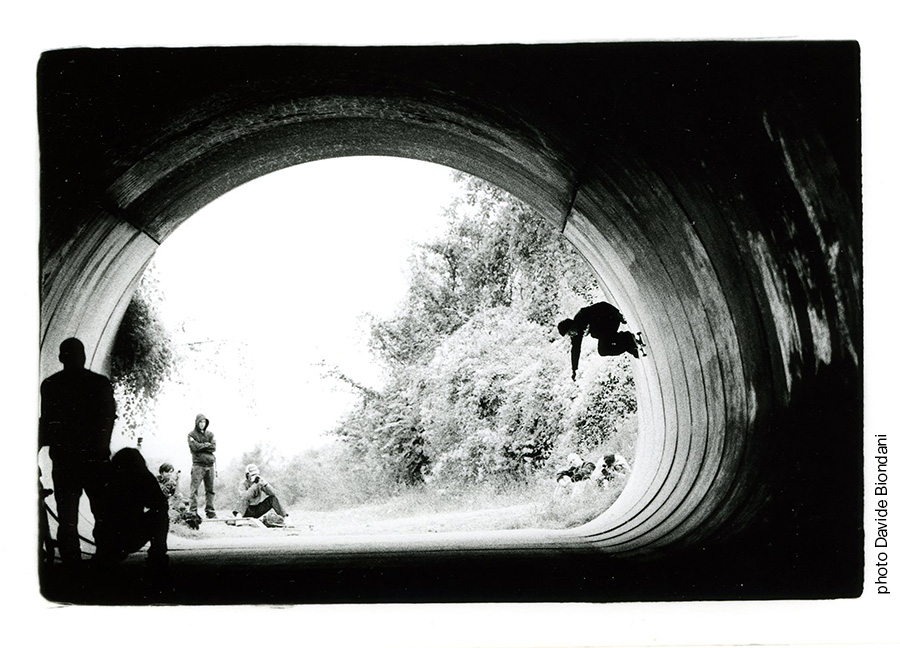 Did you eventually find the right size for your board? Ha ha ha.

Yes I did, and Powell Peralta had the code in their archives with the sizes I used. 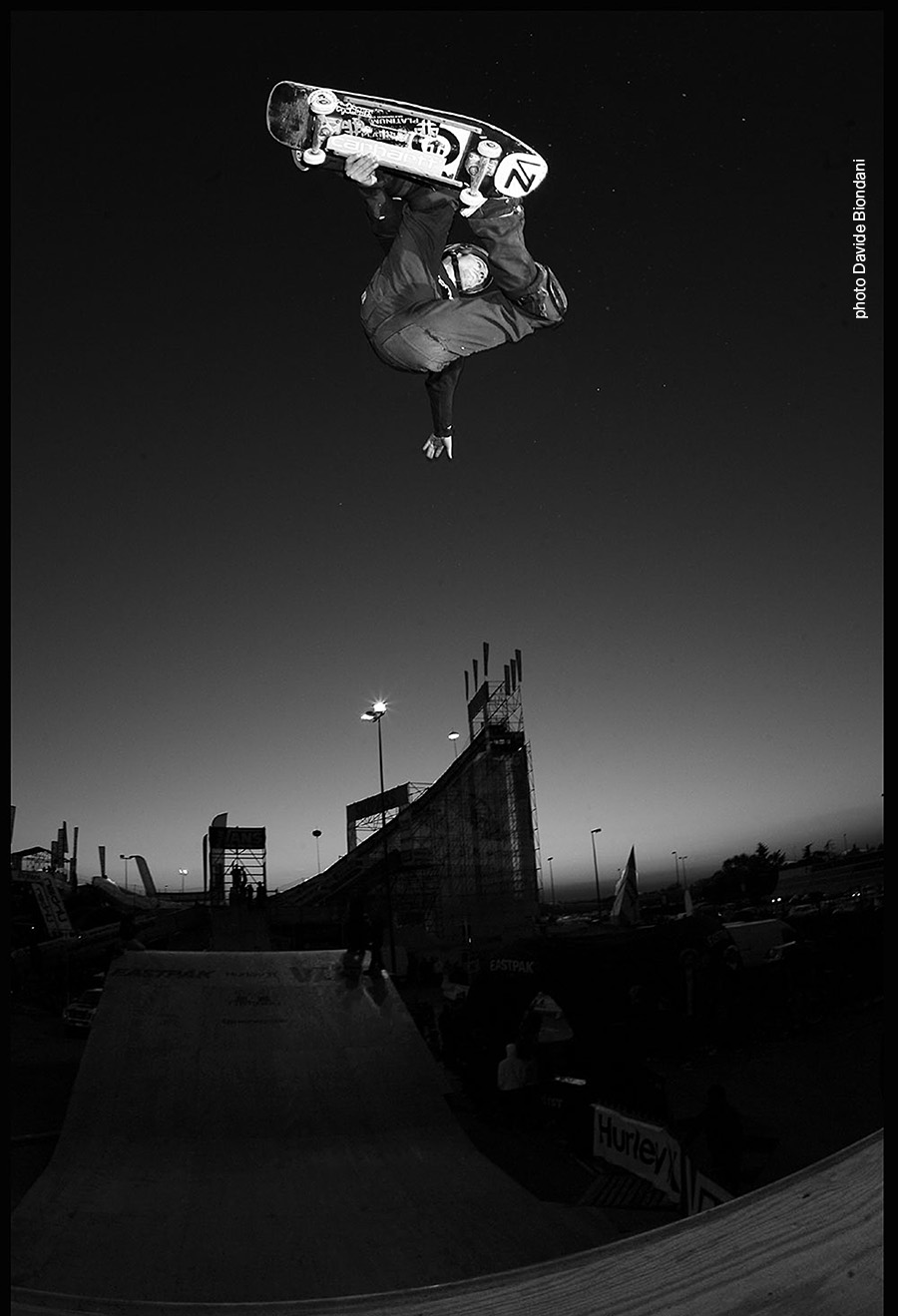 What do you think of today’s skateboarding?

Today in skateboarding every style is accepted, and it is divided into different currents: “core” and “sport”, which is not only negative. The “sport” one is certainly far removed from its roots and original spirit and from the way I live skateboarding. 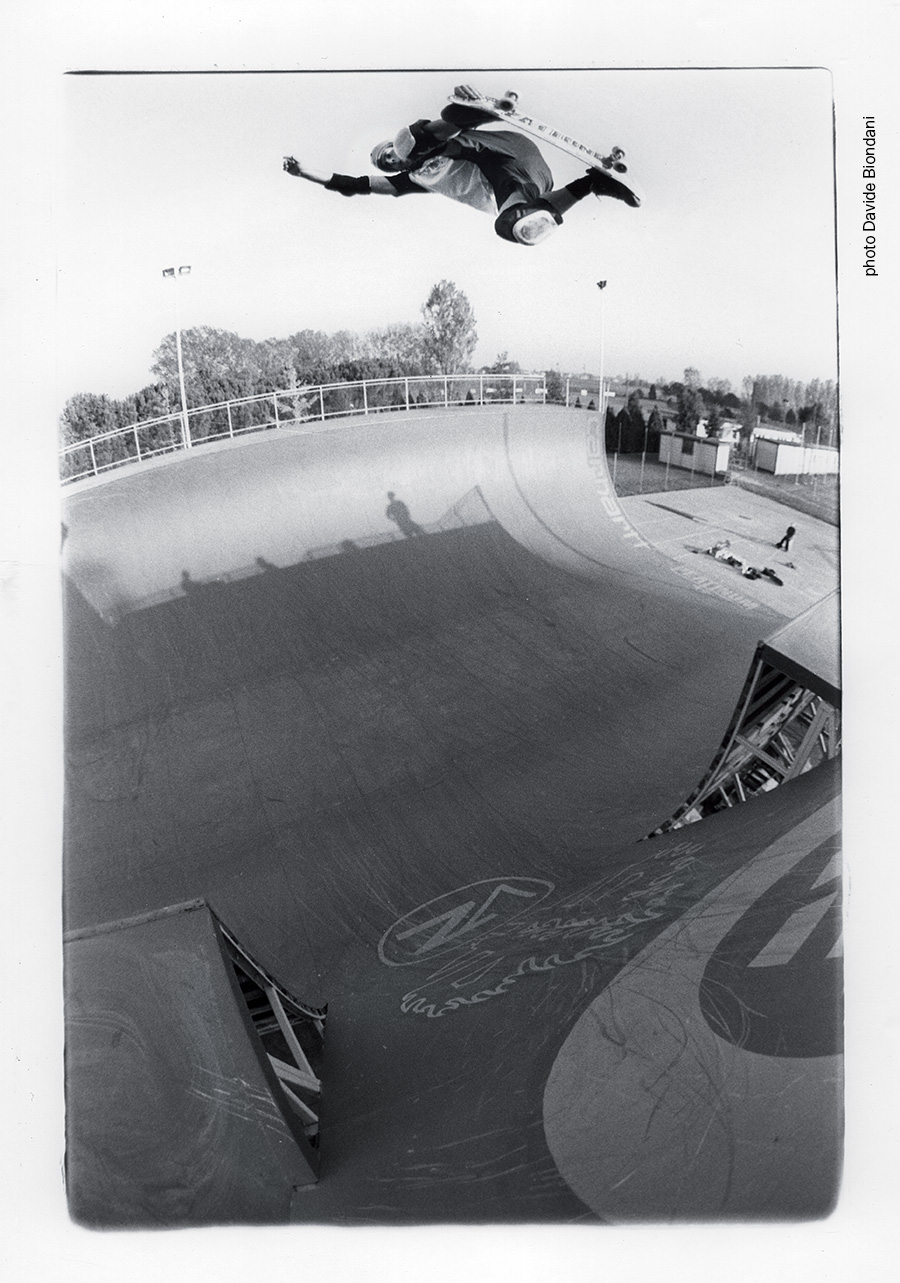 Air to fakie over the channel. Marianna Hardcore Ramp 2004.

You still skate almost every day, it seems like you never slowed down.

Age is a limit, so you have to adapt your standards and have fun making your skateboarding pleasant for yourself and hopefully inspire others too. I am part of the late 80s generation, and I hope to be able to convey something to the younger skaters and allow them know the original spirit of skateboarding in its purest form. 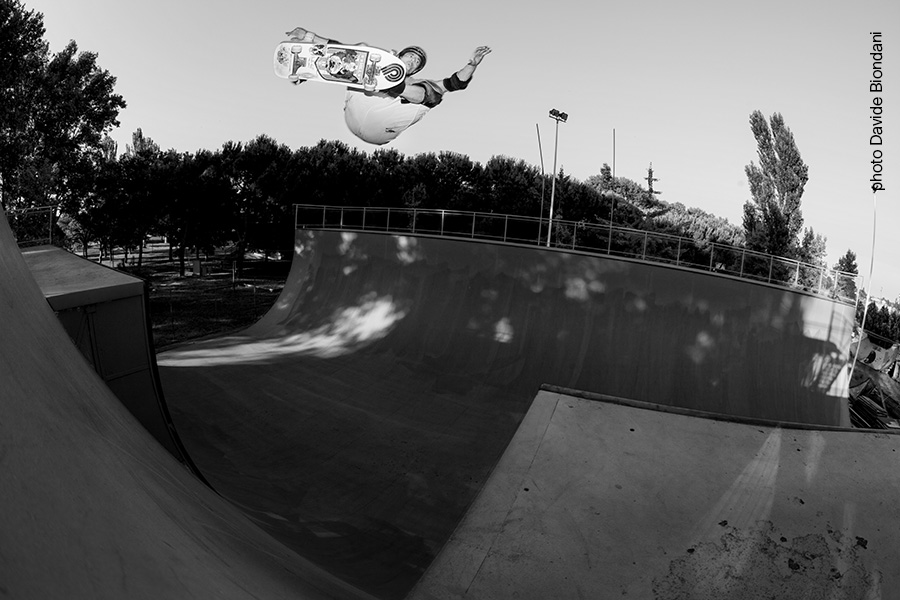 Do you think that today skateboarding is more “democratic” compared to the past when it was focused almost exclusively on the California scene?

Yes. The fact that skateboarding has become more and more popular has contributed to making it more accepted by society in general and by parents too, and not seen only as a pastime for teenagers or as something illegal.
Social medias especially have made skateboarding more democratic. A skater can be noticed in any part of the world and can have a career without having to live in Cali, and that’s positive. But for me, my mum is always my mum, and California is always California. When I put my feet on my skateboard I feel that smell, that flavor, the sun, the coping… when I get to the ramp that’s what I think about even if I’m 10,000 kilometers away. Before going skating I watch “Public Domain” or “Streets On Fire.” I love to go skate at the golden hour as we did in Cali to relive that feeling. For me, having my pro model for Powell Peralta reissued, from here, in Italy where I live and skate, is a confirmation of everything I have done in all these years and of all the sacrifices I have made to be able to skate and fulfill my dream. 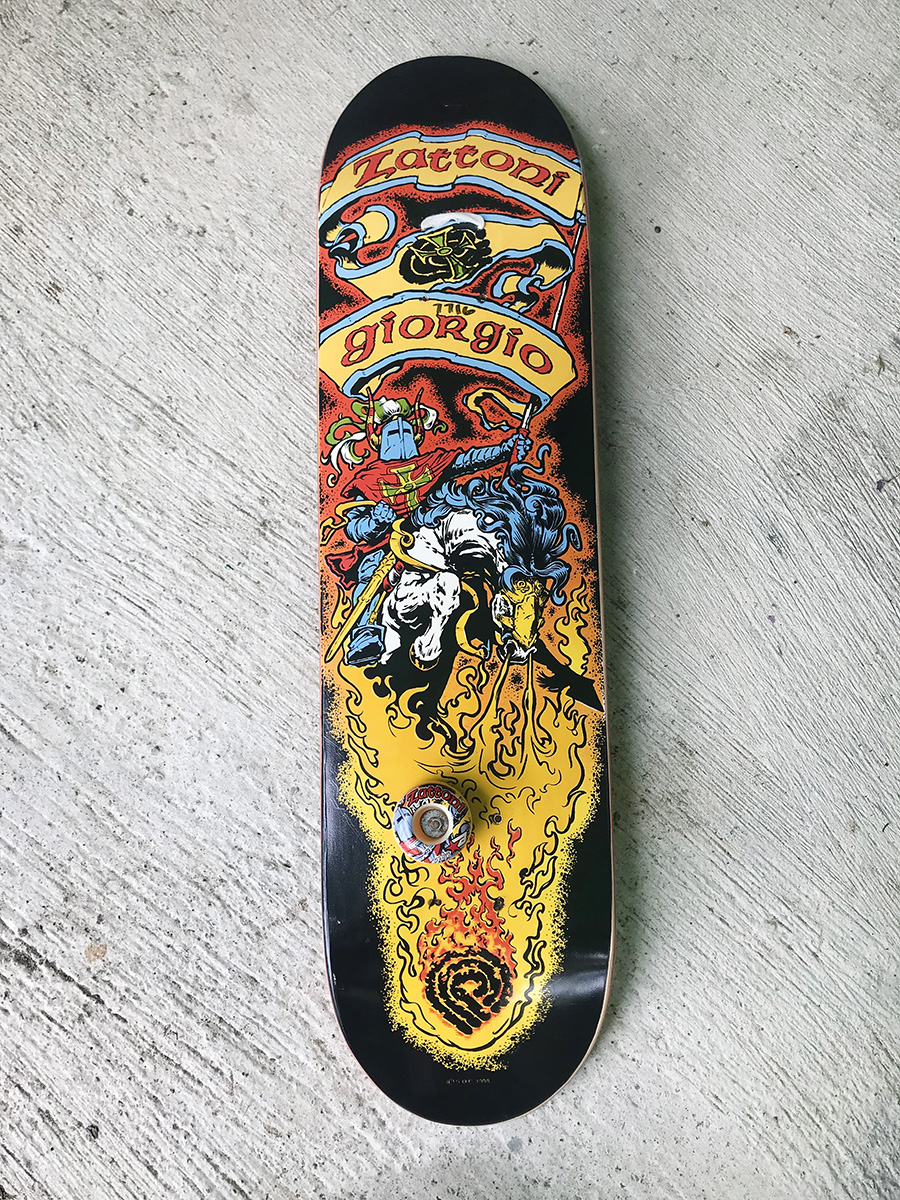 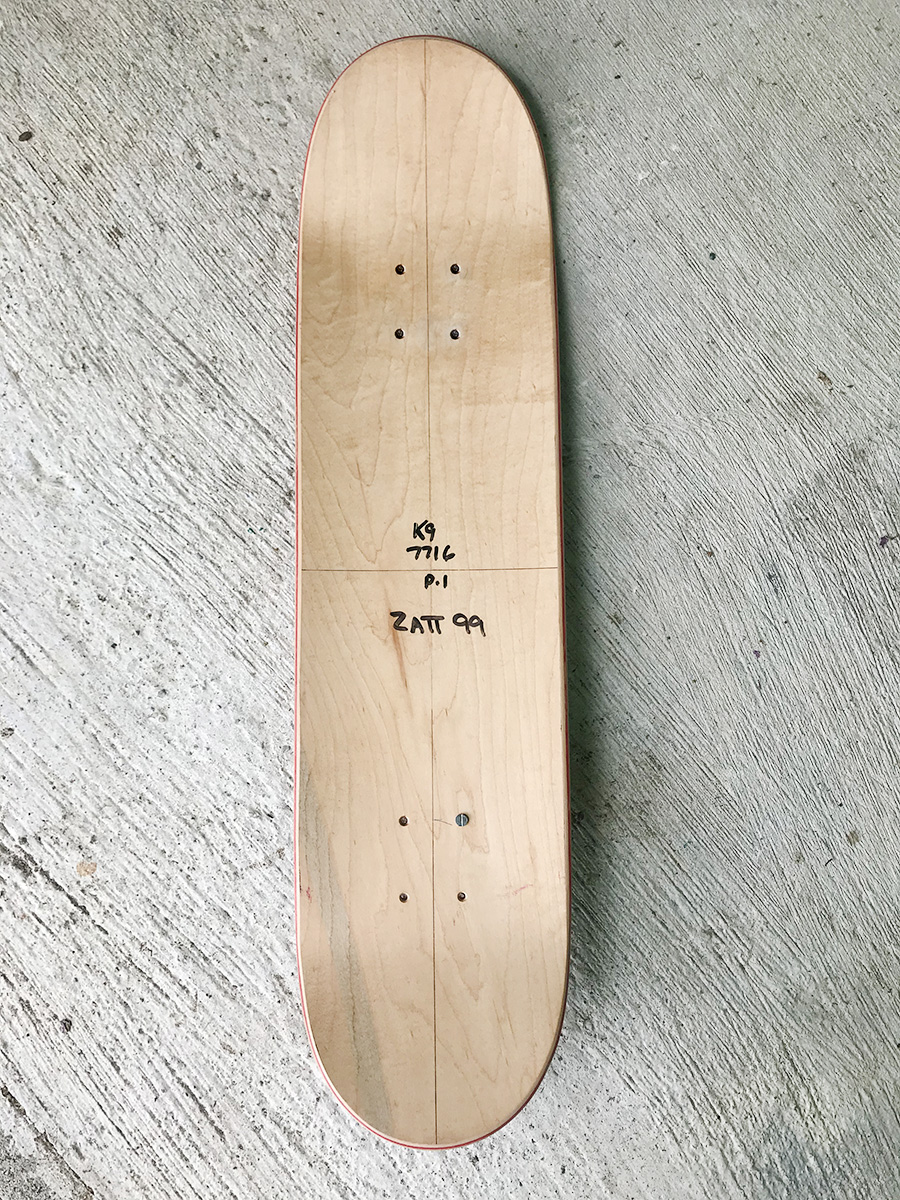