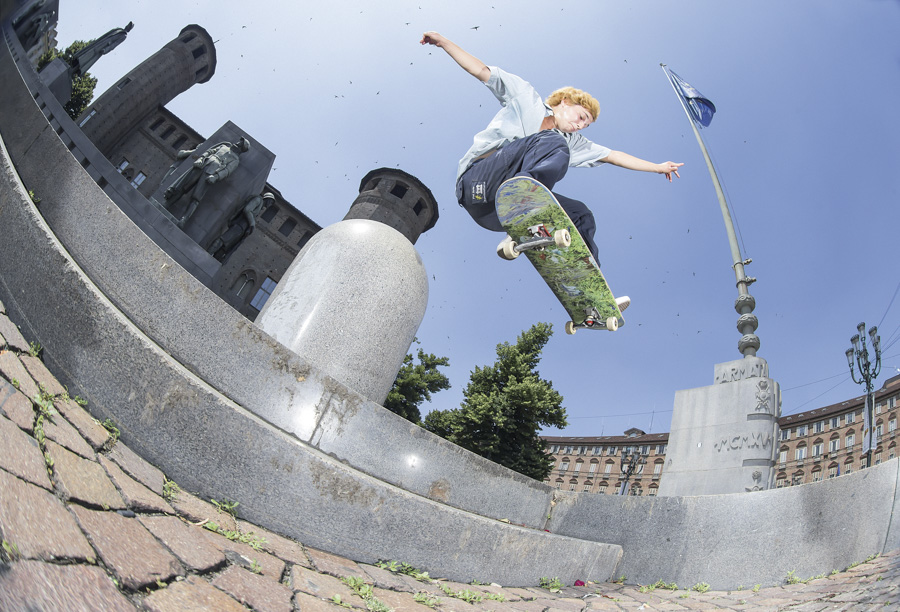 Wallie over the gap.

When did you start skating?
In 2012, I was in 7th grade, but I’ve been fascinated by skateboarding since I was young. I used to watch videos even before I started skating.

How did you get into skateboarding?
There was always a skateboard in the house, and every now and then I’d go to Piazza Castello with my mom to push mongo back and forth really fast! Then a friend of mine told me about these skate lessons they held on Saturday mornings and convinced me to go. It was the only way to skate regularly… from there, I discovered piazzale Valdo Fusi and I started going there practically every day.

Turin was one of the first cities where skateboarding was practiced since the 70s. It has always had a solid tradition, do you know anything about the history of the Turinese scene?
People have always talked to me about Turin’s scene as being totally hardcore, maybe because Turin is one of the cities with the most punk attitude… in any case, the guys I consider “old” like Tappo (the owner of Skateboarding’s Finest skate shop), Pivot and Burgos, have always told me all these stories about the fact that you always had to be careful not to cut people’s lines or not being in the way or you’d get your ass kicked!! For sure, one of the most important guys of the Turinese scene since I’ve been around is Mario Marinelli and his El Santo Skateboards. I know there’s much more to Turin’s skate scene of the past, but I’m not too informed and the only name that comes to mind is that of Paolo Nelzi.

What’s the scene like today?
The scene right now is awesome! Skaters come here to study and immediately fall in love with the scene and decide to stay; unfortunately there are few skaters of the new generation, meaning those born from 2000 onwards. There are few guys who start skating and it’s still early to say whether they will be the new generation, but since the birth of the park things are getting better, let’s just hope they don’t give up, the first step is always the most difficult.

Who do you usually skate with?
I skate with everybody! If you go to Valdo Fusi there’s always someone there, and that will surely be Palla, Icaro Nardi, Pepe, and Beffa! In any case with my team! Even though I think the best sessions are with Eugenio Nardi, who being my peer, we’re always hyping each other up! If he weren’t living in the valley it would be easier, ha ha. 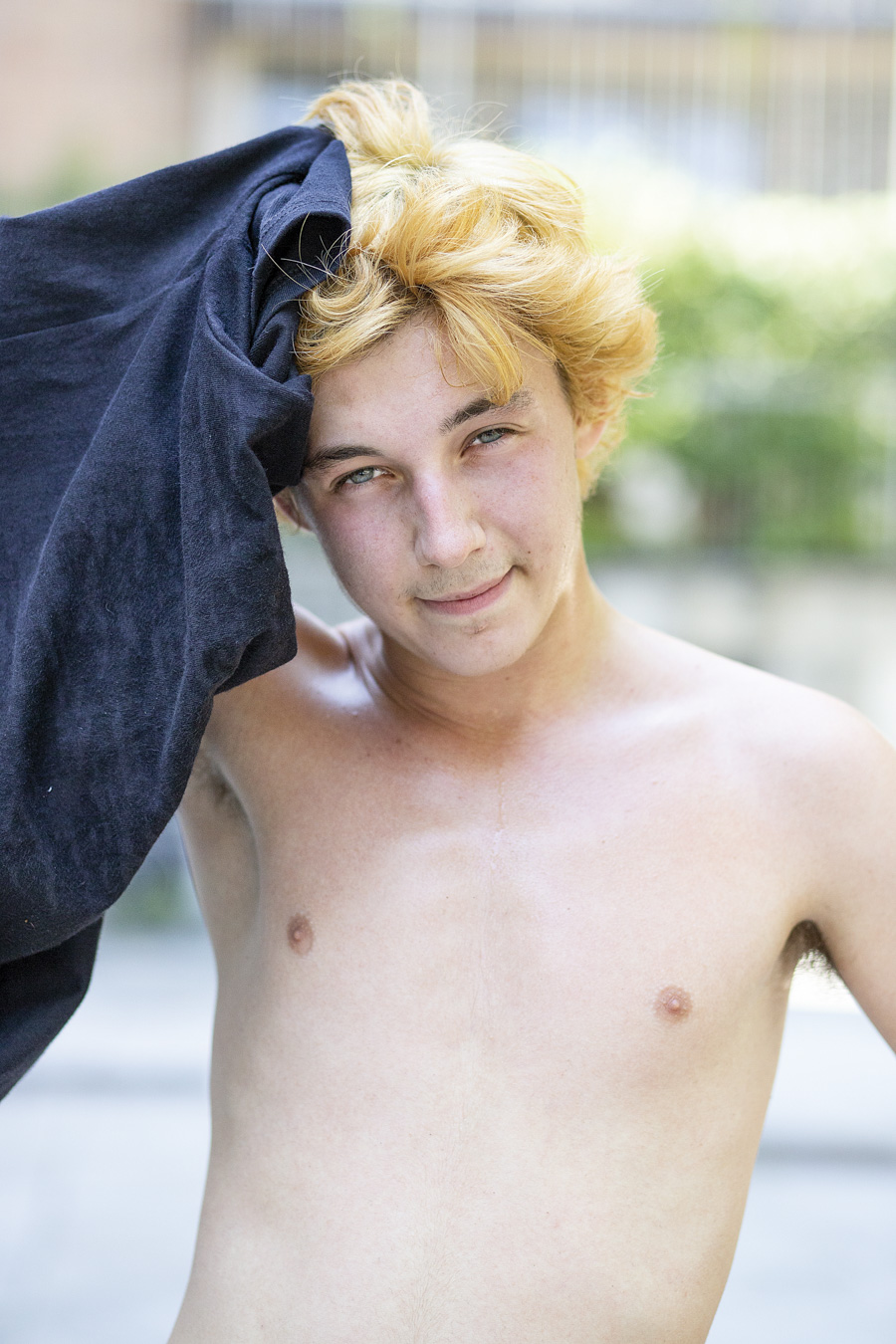 Do you have any sponsors?
My only sponsor at the moment is Skateboarding’s Finest and I hope it will be forever! Even though something’s moving lately!

Do you think skateboarding is still an act of rebellion?
I believe it is fundamentally a form of rebellion, that is part of the reason I skate! Unfortunately it’s more and more accepted and I’ve always been driven more by the illegal side of skateboarding! It has lost its rebellious side for the fact that brands out there have commercialized it and people consider it a sport more and more, which in a way is good, but on the other hand it loses the appeal of being born in the streets! And people see it as a trend, which makes me pretty mad!

Does it still make sense to print skate magazines in 2019?
It is absolutely one of the things that keep skateboarding real! If this aspect disappeared it would be a step backwards, online magazines will never compare to paper ones. 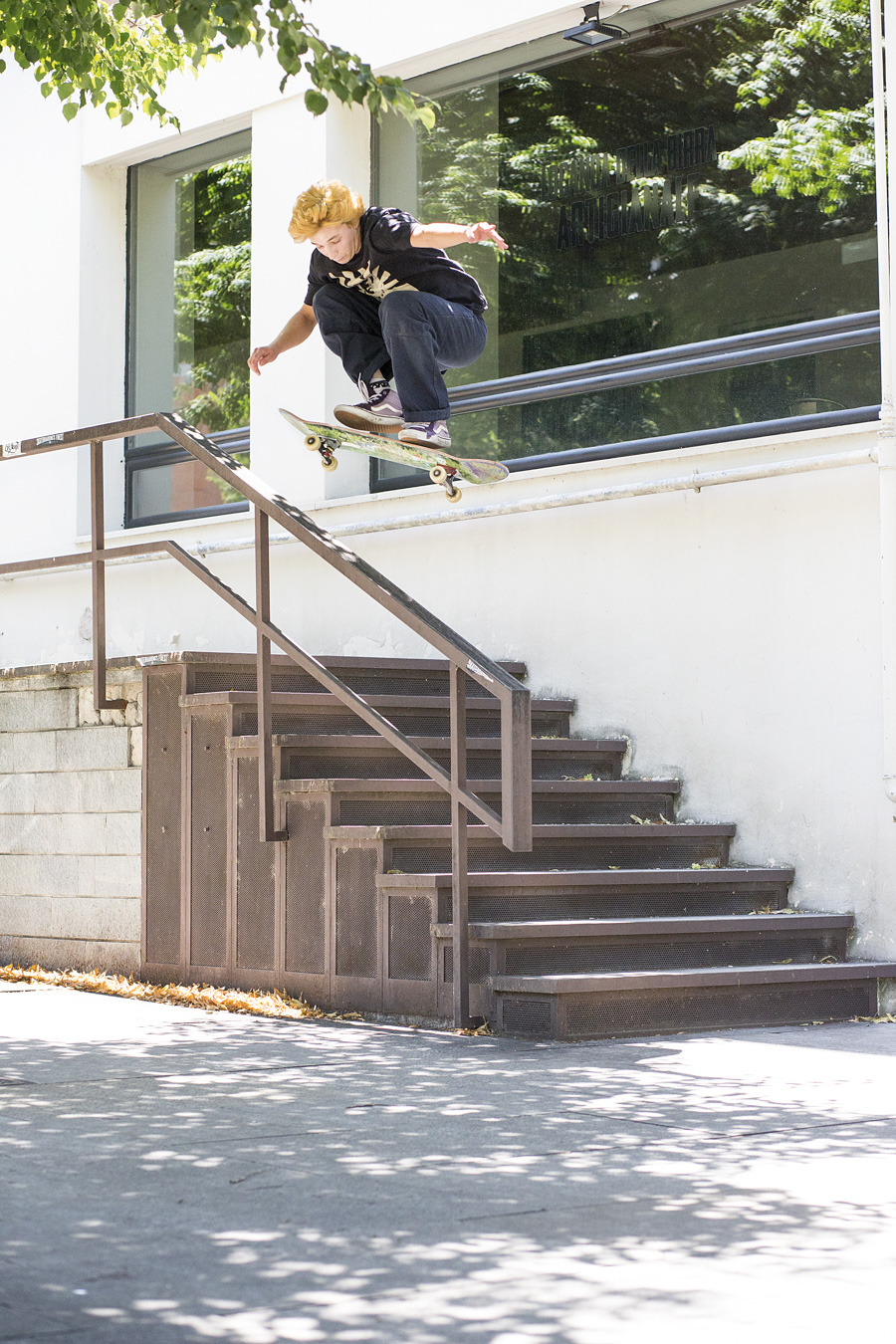 Pop shove-it over the rail.

What influence do you think social networks have on our lives?
I think social networks have had lots of influence on us! I don’t feel influenced by them at all, even though one of the positive things is posting a video and seeing many people liking it, I don’t think there’s anything wrong with that. It’s bad when posting a clip becomes a priority to get likes and people’s approval. Plus, we’re losing the fact of having to wait for a video to come out. Often, Instagram spoils the ender of a video and I believe it’s just not right!

During what skateboarding era would you like to have lived?
In the 90s for sure, I find lots of inspiration in the style of that time!

What did you want to become when you were little?
Ha ha ha, when I was small I liked to draw, as I do now, and I hoped to become an “artist” even though I then came across skateboarding, so I stopped thinking about it.

Where would you like to live?
Copenhagen, absolutely. I think it’s a city that can give you the most in every way, both work-wise and skate-wise. Plus, it’s a 10-minute train ride away from Malmo, which is another great city for skating!

Is it true that you can pick up girls with skateboarding nowadays?
Ha ha ha, actually it’s never really helped me much in this regard. Lately though, I’ve noticed that girls are attracted by skateboarding by the fact that they come to Valdo Fusi to watch skaters… I should take more advantage of this.

What type of skateboarding do you like and who are three skaters that hype you up the most?
I really love old school skateboarding from the 90’s, but I also like transition skating. I’d have to say Dane Brady, Cory Kennedy, and Tony Trujillo.

If you didn’t skate what sport would you be doing?
Ha ha it’s strange but I really like ping pong, I practiced it for a year before skating and I play whenever I can!

Apart from skating do you have other passions or interests?
I like to draw and I like graphic design in particular. This is the reason why I chose the school I’m attending right now! I like to drink and spend time with my friends too, ha ha. 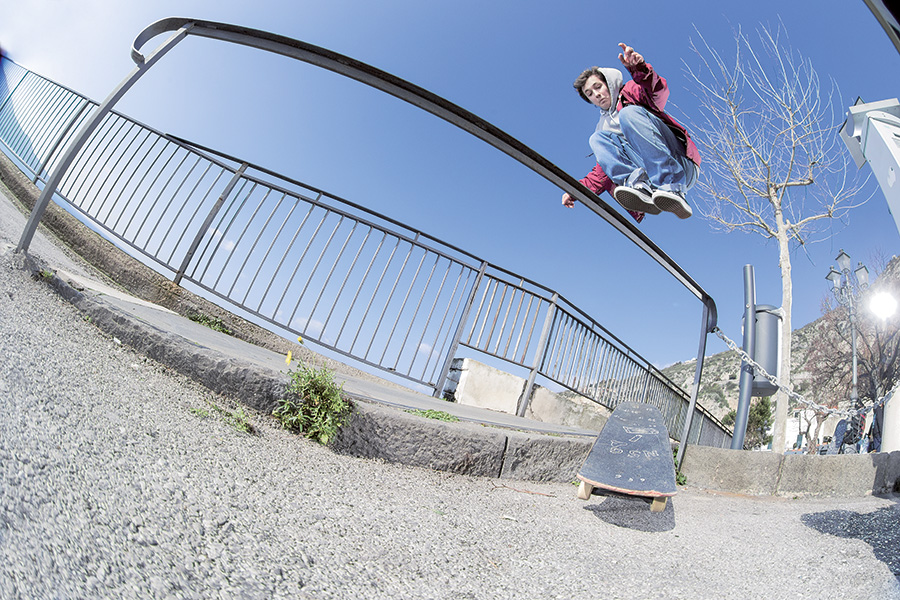 How shitty is Trap music? What do you listen to?
It doesn’t all suck, if you look hard you’ll find a couple good songs, but most of them are complete shit. Too bad it has influenced skateboarding as well. I listen to Italian songwriters and punk music mostly, but also dance music, and any song attracts my attention!

Any project you’re working on?
Yes, I’m working on my video part, which thanks to Alberto della Beffa I’m sure will be dope!