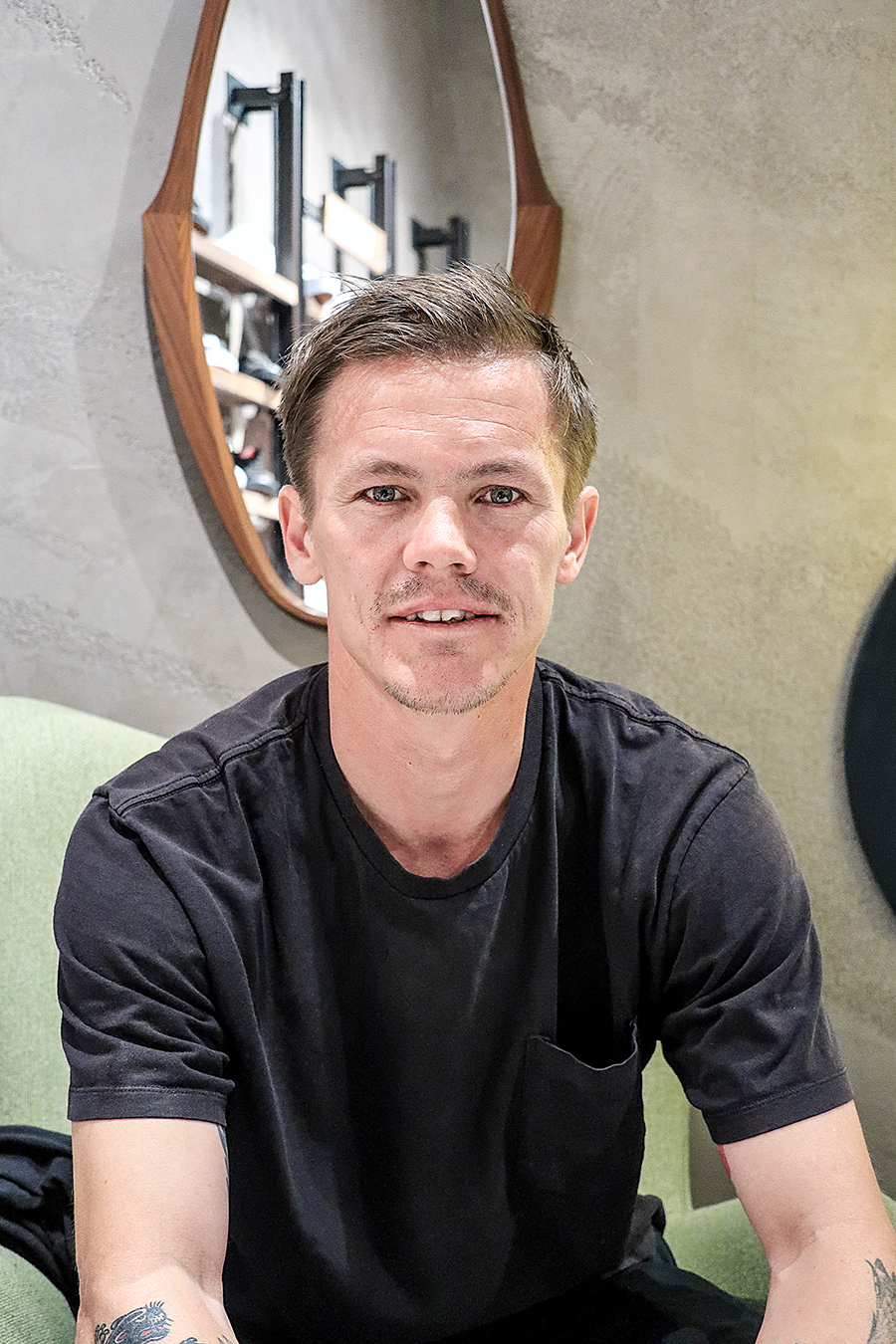 Hi Geoff, how are you?

Well, I’m fine …. I’m checking your mag right now… that hippie jump in Naples is so cool. Does he wallride after the hippie jump?

The flat was so rough that it was almost impossible.
A wallride could be cool after that trick… so… how are you?

We’re good, we are curious to interview you, he he he.
So let’s go.

We don’t want to ask you the same questions, because everyone has already asked you pretty much everything… but we want you to talk a little about growing up in Liverpool.
It was so awesome man, creatively it was incredible, great people, great culture, great music scene, great skate scene with good attitude, funny people. So it was a good place to grow up. It was a pretty rough city around the time I was a kid or a teenager, pretty industrial, tough time, but that makes you who you are.
I spend a lot of time there still, but I don’t live there, because I have a wife and children in the US, so basically I live there.

Have you ever thought about coming back to Europe?
I could totally do it, but for skateboarding, you know, Liverpool is cold and wet during winters, so it would be hard to be a pro skateboarder living there. I wanna skate every day, I’ve always skated every day. I’m not the type of skateboarder who takes six-month vacations without skateboarding. I have to skate every day.
I’d struggle moving back for that, plus all the outdoors we have in the US are amazing… you know, the ocean and mountains.

As said basically, “skate journalists” have already asked you pretty much about everything. Is there anything that we, as a category, have never asked you? Something that maybe you wanna talk about, but nobody has ever asked you?I don’t think about myself like that, I enjoy a lot of things, I’ve got tons of interests outside of skateboarding, you know… maybe you don’t see the whole picture of it, and I like it like that. People see my skateboarding and that’s enough for me. I have my own private world.

He he, it’s good. I don’t wanna talk about your career, I wanna know what you’re up to right now.
I’m skating a real lot, I’m working on a new video.

Yes!
He he he, I’m 95% done. I’ve only filmed for 8 months. The other videos I’ve made, took more time… like years! I’ve always been proactive, you know, and I equate that to my passion for skateboarding and never let the business side of it compromise my passion. It’s the act of skateboarding and the love that I have for it that keeps me motivated and driven. I’m really motivated, I’m in the best shape of my life. The other world I’m living in, outside of skateboarding, keeps me in great shape, so I’ve been skating a lot, and I just put out a board with my name on it after a few years without a pro model. I just put it out two weeks ago, for a skateboard business that I’m starting.

Congratulations… it was time.
I like the creation of something new. It’s inspiring.

Regarding your new video project, 8 months is not a long time.
The last video I filmed for was Propeller.

Thanks… that video is 4 months of my skating. I was hurt for most of the time, so I only had a few months to film. I’ve had a good video history before Propeller, so I wanna redeem that.

I can’t wait… we’ve watched you growing up ever since your check-out in TWS (one footed bs 5-0 on a rail by the way). Have you ever thought about how your life would be if you hadn’t relocated to California?
Hmm, I probably would’ve worked for my father in Liverpool, he worked in printing, like magazines and a bunch of different products. I worked with him a little bit, and it’s probably one of the reasons why I like skateboard manufacturing, you know, the product, from that. But I’m sure that I’d be happy one way or another.

How do you find a balance between your European roots and the Californian way of life?
Life’s what you make it. You can choose your environment and the people you wanna be around. I can be anywhere in the world and I can adapt, and if I don’t, I don’t survive.
I love Europe, I’ve traveled a lot around mainland Europe, all over, through skateboarding mostly. I’ve seen a lot of places and thought: could I live here? Culturally, California is a different place. I’m from the North West coast of England, it’s very industrial, very middle class, and a very hard-working place. You don’t get anywhere if you don’t go to work. The Californian lifestyle is a lot easier, a lot more convenient. It’s a little bit more superficial, maybe. I don’t live in a gated community, because it feels… closed. A lot of people live in gated communities down there… that’s not for me. I choose the life I wanna live in California. I like it for skateboarding, there’s great skate spots, half of my time is spent skateboarding, it’s what I do, so it’s good. I prefer some of the more desert towns in California, I prefer Northern Arizona more than I do Southern California. It’s pretty rural, and the cities are pretty big too, huge, like Phoenix. I’d prefer to live there, but there’s less skateboarding. So where I am now, it works for me. I love Liverpool and England, I spent 11 weeks there last summer, 8 weeks the summer before, and 8 weeks the summer before that. I’ve traveled to the UK at least 2,3,4 times a year, for the last 20 years. It helps me mentally.

What do you think about the current state of skateboarding, what or who motivates you?
There’s a lot of amazing skateboarders right now, and a lot of creativity. It’s very similar to when I first started skating, where there was this change in guard from 4 or 5 huge brands into more technical and creative exploration, like the H-Street videos. There were a lot of great skaters in those videos, and the best guys that are still around now, there was a pan full of them in there. But there were also like one hundred guys doing creatively, technically… new things, but not necessarily done to the highest ability. There are a lot of similarities with the current situation, searching for new ways to manipulate the board and the environment, the street spots. I like that. If I didn’t, I’d be pretty closed-minded to creativity. There are no rules in skateboarding, I accept Rodney Mullen, I accept Tony Hawk, they’re totally different styles, and they serve a totally different progressive purpose. I see a lot of that, and it motivates me. It means people are interested in it, creatively. I’m motivated by that. There’s a lot of guys that I like to skate with, guys who I like to watch skating, or guys that whenever they skate I’m happy to watch ‘em. But that’s not what drives me necessarily. It’s the fact that the progression and innovation is still there.
For myself too. If I don’t learn tricks I’m not satisfied. I always wanna learn tricks. I’m not the youngest kid on the street any more, but creatively and technically, I’m still learning stuff all the time.
Straight up… I get just as much passion out of being out skating by myself and doing a trick when nobody is around as I do from a trick that I filmed, a lot of times. That’s the truth. A lot of times I’ve filmed by myself for that very reason. I enjoy the silence and the peace of just riding a board. I’ve had stuff in videos, where I’ve gone out by myself and set the camera up. When I film I skate at the crack of dawn, because I get up at that time anyways, so that’s the perfect time for me. The light is perfect, there’s nobody around. 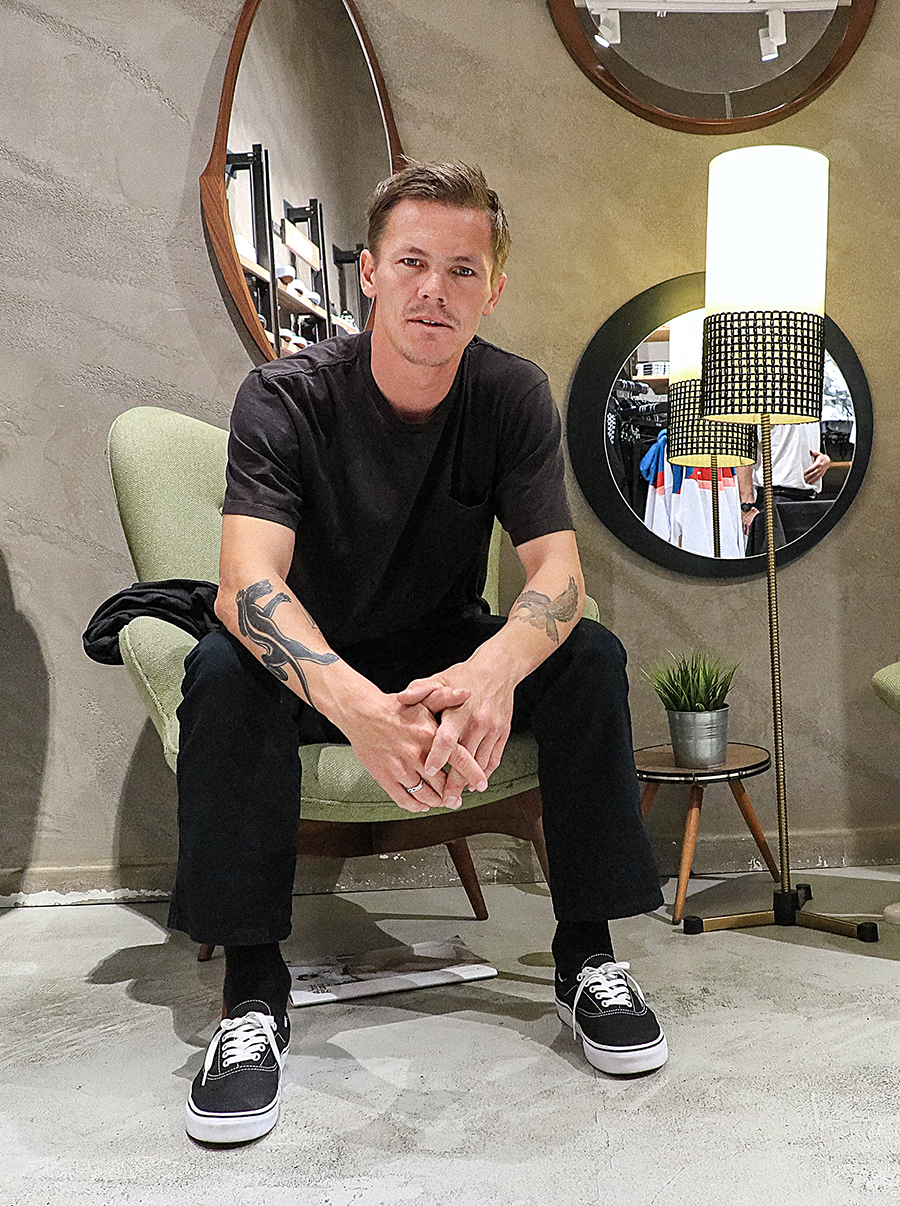 Are you picky about your set up?
Not any more. I used to be pretty picky. I’ve always skated pretty big boards, even when I was little.
It was a struggle when I first moved to the US to find big boards. Around the mid 90’s everybody used small boards. For a while I really liked flat boards, so I would go to the warehouse and choose the flattest ones out of the mold.
Now I don’t care, I’ll ride anything. I rode a board for 7 months straight for the mini ramp part I made for Vans. The board was destroyed but I didn’t wanna change it. I enjoy the challenge of riding a board that is broken. I’ve been riding stage VII Independent trucks from the late 80’s, vintage trucks, since 2005.

How do you find them?
Friends, eBay, people reach out to me, collectors on social media… if I find some stage VII Indies I’ll reach out to them, “Hey, I need those trucks, I need ‘em now. Whatever you want, I’ll give you anything, ‘cause I need them, they don’t exist.“ I’m not fussy now, at all… but I don’t like red-stained boards though.

I remember when you said “bollocks!” on TV…
I did pretty good doin’ it for four years… and not swearing on live television… skateboardin’, and I never swore once! Proud of that.

Well… are you happy with your life?
Yeah, I’m very happy! I have a beautiful life and children, got great people around me. Yes, I’m thankful for where I’m at. I’m not burned out, I’m not bitter, I still love my skateboarding, and I’m 40 years old… fuck yeah!