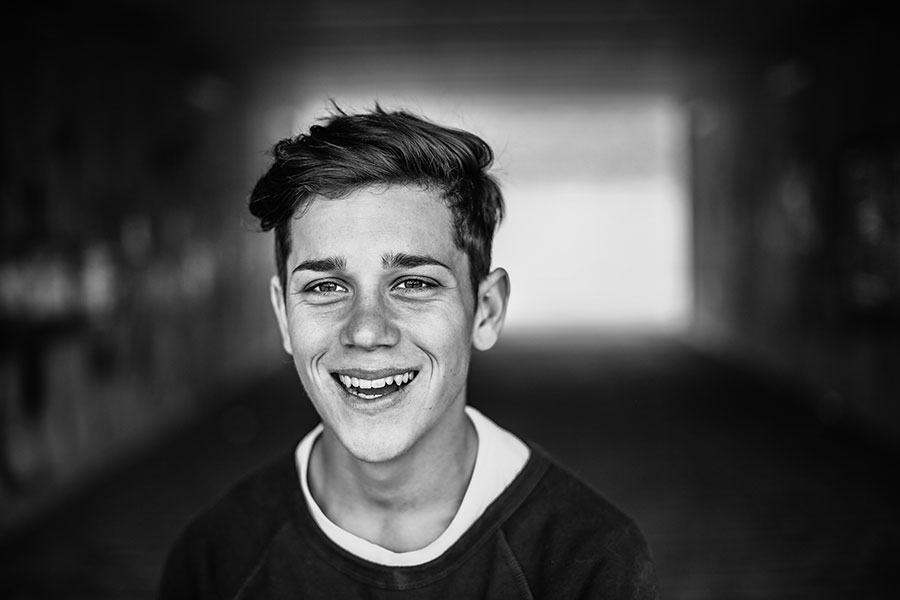 Describing Gummy in the usual way, talking about how the new generation kicks ass on street and vert would be kinda boring…I love rolling around with him on our cruisers along Ostia’s seaside, enjoying the sun while we push ourselves as fast as we can. And that’s how I discovered Andrea’s real talent, being a mini-Banderas that can’t be stopped, and I’m not talking about the Banderas from the Mulino Bianco (Italian snack brand), but the one-time Latin Lover. Rolling around with him is like torture: every twenty meters he’ll stop to say hello to girls of all ages and when I ask him, “Who was that?!” He always answers me with a smile on his face, “just a chick that’s going after me”. And at every sunset my frustration grows if I stop to think about the fact that back in the days, at his age you were considered a total loser if you skated, a misfit, whereas now you’re mainstream, you’re cool if you skate and women look at you with admiration and acceptance. Lil’ Andrea is the boss in this regards, and he knows it too! I remember how hard it was for us to get noticed by women at contests, and the disappointment of finding only sweaty guys or ugly women among the spectators while he gets kidnapped after contests and locked in the bathroom…nearly raped… and he answers, “Not now, I’m tired, I just did the heat and my legs are hurting me, maybe later.” It makes me kinda mad, but actually it’s just envy on my part…hahaha. Regarding his skateboarding, the photos speak for themselves, there’s no need to add anything further. P.S. If you were to open his address book you would find more girls than in the list of the Womens’ Rights Movement! 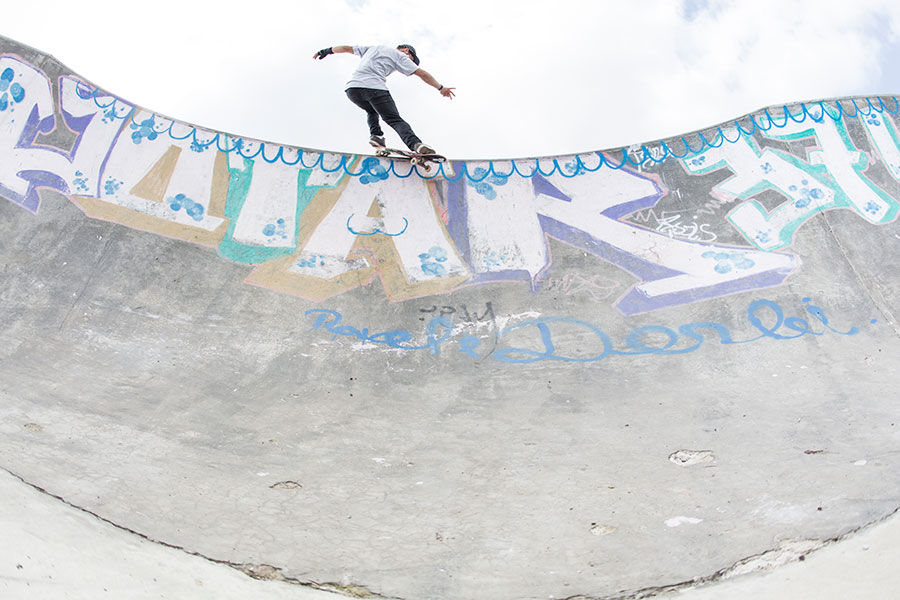 Hi guys, I‘m from Ostia, a Roman neighbourhood. I’m 16 years old and have been skating for 10 years.

You started skating in a pretty unusual way right?

I guess so, my brother used to skate and surf back then, because you can surf in Ostia. One day he brought me to the local The Spot skatepark, and just told me to skate… that’s how I began and have never stopped since.

Did you ask him to go skating?

No, I didn’t ask him anything, he brought me to the skatepark and told me to skate and I skated! Thanks brother!!!

Imagine if he had brought you to play soccer?!

Soccer is for fags, I’ve never played soccer, but I’ve been playing rugby for the last 10 years and I enjoy it because it’s a gentlemen’s game.

Can rugby and skateboarding coexist?

Of course! On the days I don’t train for rugby, I go skating, so I manage to do everything no problem. Actually, my only problem is school, I go to high school and don’t feel like doing anything… I’m gonna flunk, I know… well I hope not, even if I have very low marks.

Why did you choose to skate trannies instead of street from the beginning?

I always skated at The Spot, and since I was little I didn’t care about skating street that much. I’d just skate, I didn’t care, so now I do kinda have some problems skating street. For sure it’s much easier to learn how to skate in a park rather than on the street. Anyway, without The Spot I wouldn’t be a skater now. There really isn’t a reason, it’s just that I feel more at ease on trannies you know?

Just keep skating. Even because it’s been quite some time since Italy has had good vert skaters. There’s all these really small kids coming up now.

The problem is that if there are no parks, nobody can come up knowing how to skate trannies. Now there are some parks where you can skate bowl or vert. Among the young kids, Ale Mazzara is very promising, and he’s only 10 years old!

It’s quite a problem for you to skate trannies now, right?

Ever since the park closed down it’s a real problem for me. The first skatepark is 30 km away from where I live. I skate the Bunker vert ramp, and It’s like 50 km every time. The Roman vert scene is composed of guys like Jekill (historical H-Street graphic designer) who’s probably like 50 years old, and Ale Mazzara who’s 10 years old. This is the first serious vert ramp in central Italy to be built in some time. Rome has always had a street scene, but now a vert scene is also developing. 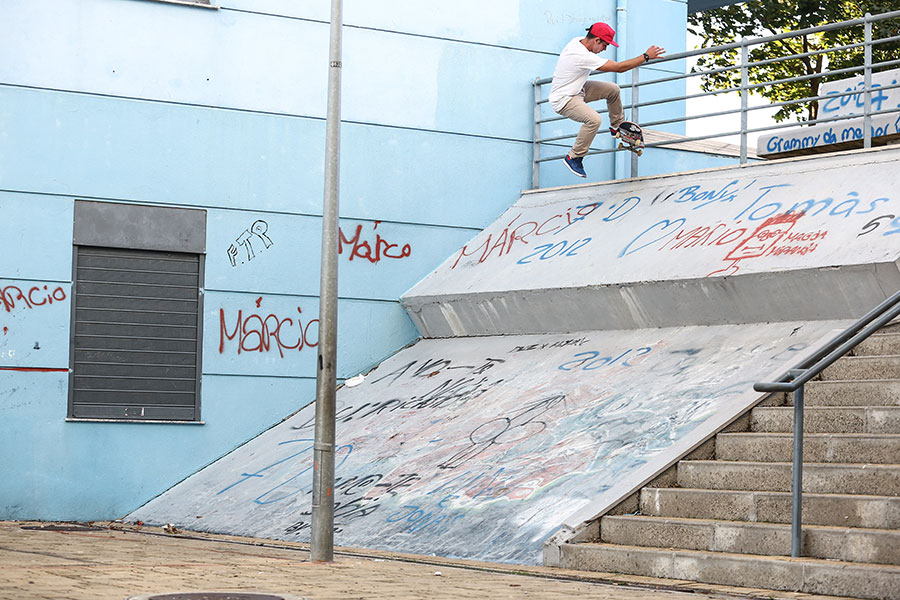 Ollie up to no comply.

Is it easy for you to skate vert?

I’m learning tricks and get hurt much less than skating street, that’s for sure! Skating vert gives you a basis on which to learn how to skate bowls as well, especially big ones. Everything is more difficult in bowls, but having a vert foundation makes it easier. If I could, I would like to only skate big bowls.

And then what happens is that someone brings you to a spot and tells you what trick to do, because you can’t think of any.

Ahahahahaha it happened a couple times, if not more. I was at a secret spot in Fiumicino and Dave (Biondani) asked me to do a fs blunt, and I told him I didn’t know how to do it. Dave answered me, “DO IT.” A few tries later I landed it. Yes!!

Ostia is a town on the sea on the outskirts of the more famous Rome.

Ostia is the most beautiful town in the world, there are many hot women and most importantly, there’s the sea. I prefer Ostia to Rome 100 times because Rome is very chaotic. Apart from all the Romans that come here to party on Sundays.

Although you are young, you’ve skated in contests alongside guys that are older and more famous than you. But you are always respectful of other peoples’ lines.

I’m very anxious… I’m always afraid of missing the first trick…regarding skating with older guys, I bring them respect, and have lots of fun skating with them. I get nervous in front of a videocamera or photocamera too, if I don’t land the trick right away I get fucking mad, I get anxious.

Do you enjoy skating contests?

I enjoy skating contests, both in Italy and abroad, even though for the moment I’ve only skated in Europe. The vert scene is growing, but I don’t like vert contests that much, I don’t have fun. I prefer bowl contests, maybe with a Jam session, because if you miss a trick, you can make up for it, so there’s more energy. Every time I go to a contest, I go back home inspired to try new tricks and lines. The problem is the absence of decent bowls in the area. 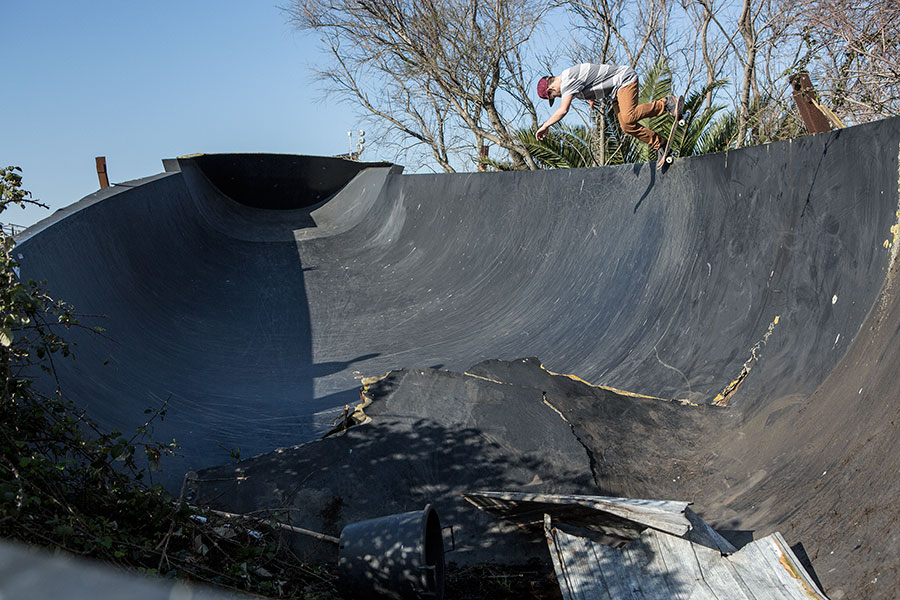 Who inspires you to skate?

Enough boring questions, let’s talk about serious stuff. The word is spreading that you’ve got the hottest Whatsapp in Italy.

Hahahahahah! I think Jacopo Picozza comes before me, but before him the great Manuele Mariotti, a real Casanova, but the target of his women is much lower than mine.

Well, it all begins with a tactical like on Facebook or Instagram, and I take it from there. For example a chick wrote her phone number on my Instagram. They’ll send me anything, I get really explicit things (the editorial staff can confirm), and then I decide. The ugly girls I just ignore or block them. For the hot ones, I charge ahead until I obtain the outcome I desire. I can’t show you certain things though, hahahahaha!

Is it because you’re famous?

Actually, lately I’ve had girls writing me because I’m good on a skateboard. Not bad… hahahahaha!!

I hope you’re conscious of the fact that back in the days when we were kids, skateboarding was for losers, right?

Do you think you’ll ever be able to live from skateboarding?

I have no expectations, I love skating and I see myself skating in the future, making a living from it is not a necessity right now. I want to travel and skate contests, and I would like a park near my house where I could really learn to skate seriously. I want to go to the U.S., as I see it, it’s full of crazy parks and spots… a dream. Up to now I’ve only travelled in Europe, I want to go to the U.S. and see what it’s like.

It would be a problem going over the border with your Whatsapp.