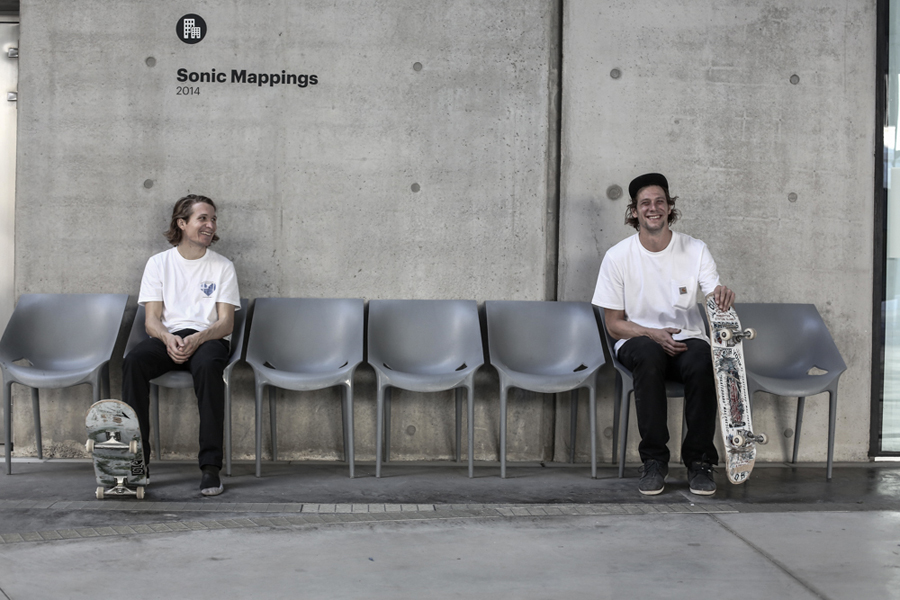 As part of Rome’s contemporary art museum MAXXI’s exhibition “Open Museum Open City” French skater and artist Raphael Zarka participated last October in a three-day performative project called “Exercises In Revolution”. The project, reflecting on the theme of games and rules, featured a wooden replica of Tony Smith’s sculpture “Free Ride” from 1962, a very skateable piece of early Minimal Art that inspired Raphael for his latest book with the same name: Free Ride. For the very first time the space in front of the MAXXI Museum was open to skateboarders who were allowed to skate the sculpture and became an active part of the artistic performance. Definitely a “Free Ride” inside the museum.

Carhartt fully supported Raphael’s projects and invited two of their riders, Sylvain Tognelli and Bram De Cleem, to take part in the event.

Read the full article on a brief glance issue_28. 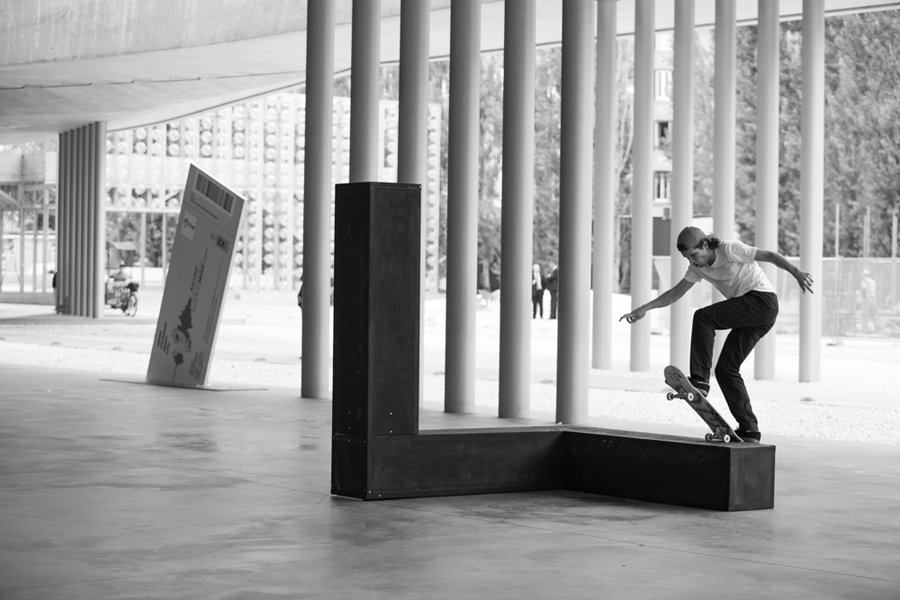 What do you think about the Carhartt/MAXXI project?

When I got the email from Bertrand about this project I didn’t really know what to expect, I tried to imagine the scenario and in a way I was a little afraid because it could easily become a nightmare if you have to skate this sculpture for three days and the obstacle is badly built or the event badly organized, but in reality the organization was really good. We saw the structure on the first day but it was new and we were not allowed to touch it until the performance started, so we began to imagine all the tricks, and the sculpture was actually perfectly built. We started waxing it and many skaters from Rome came over to skate it and it was good fun. I can see that these kinds of projects don’t always work out as well as you can imagine, but this one I think was a success.

What was the funnest part of the event?

The potential of the tricks we could’ve done was way larger than the tricks we actually did, in the end we skated it as a ledge, but there could have been so many ways to skate it, turning it around, putting it down some stairs or flipping it on its side. We fantasized a lot and we did a little in three days, but it was a success and the purpose of the performance was certainly achieved. It was a physical confrontation with the sculpture, hurting yourself, pushing it, even when we had to move it to find the right angles for the pictures; this is a sort of knowledge that you can only have if you skateboard, you can try to imagine it, but you cannot know in advance for sure… so even finding the right place in the location for the sculpture was itself part of the performance. The museum could have put the Raphael replica sculpture in the place and present it as a potential skateable sculpture, but this time it was a completely different experience because skating it was the core of the performance. You could touch it, you could skate it, and it made more sense to me because it’s like giving a new life and new meaning to the sculpture.

What’s your opinion about the fact that nowadays skateboarding is more accepted compared to many years ago?

It’s funny because when I started skating, which is not that long ago, there was a reaction to the legitimate culture and to the legitimate sports at the same time and we “were against”; the movement was to reject other stuff to define yourself as a group, and slowly I started feeling like skateboarding has been accepted more and more as a thing on its own. Now we are encouraged as a group not to be against, but be as a creative group for photography, videography, etc. People from skating work in the film industry, and skaters are listened to by architects and urban planners and this is an interesting thing. It’s interesting to find yourself in 2014 as an active part of a modern art exhibition in Rome. I don’t have a strong opinion about this because it’s just happening now and we’ll see if it will be good or not for skateboarding. These days skateboarding definitely exists not “against” but as “part of” and that’s interesting. 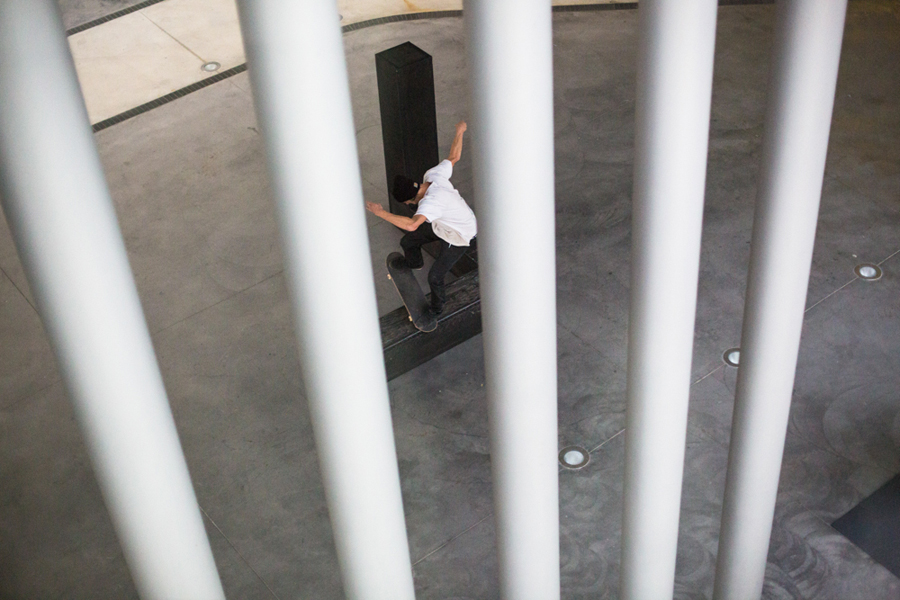 What do you think about the whole project from a skateboarding point of view?

I really like places where you can hang out, drink a coffee, skate smooth flat ground, roll around not doing the same back and forth every minute, so the space is nice, well designed, open, there are contemporary things as well, the chill-out atmosphere, no crazy traffic. I really enjoyed that, this could be the everyday spot.  It’s a museum and we were part of the exhibition, so the attention that people gave to skateboarding was kind of positive and curious. Usually you are not really supposed to be there and there was still some uncertainty surrounding our presence there, ha ha ha! There were still some doubts ah ha ha but all went fine.

As a skateboarder how was the feeling of being part of an “art performance?”

I didn’ t feel like we were performing on a modern contemporary sculpture at all, I just felt like skating a ledge basically. When you are skating you are skating, you know? Sometimes sculptures have skate friendly shapes and that’s why we skate them… they go together very well. I really appreciate and understand what Raphael is trying to say… to take back stuff and give them a second life, a second meaning… skateboarding is one of the things where you actually experience shapes and forms instead of just looking at them. I get this, but when you are skateboarding you think more about the tricks you can do on the obstacles more than the concept behind their construction. It’s cool to have people like Raphael who has the vocabulary and the references to put all of what skateboarders know from the everyday experience on the streets into words and to make it understandable to everybody. Even if I know what he wanted to say, I don’t have the knowledge about the art history, physics, and all of that stuff to do it properly, and it’s nice to hear somebody recount it in a book and give some order to the thoughts I already had in my mind. He did a good job.