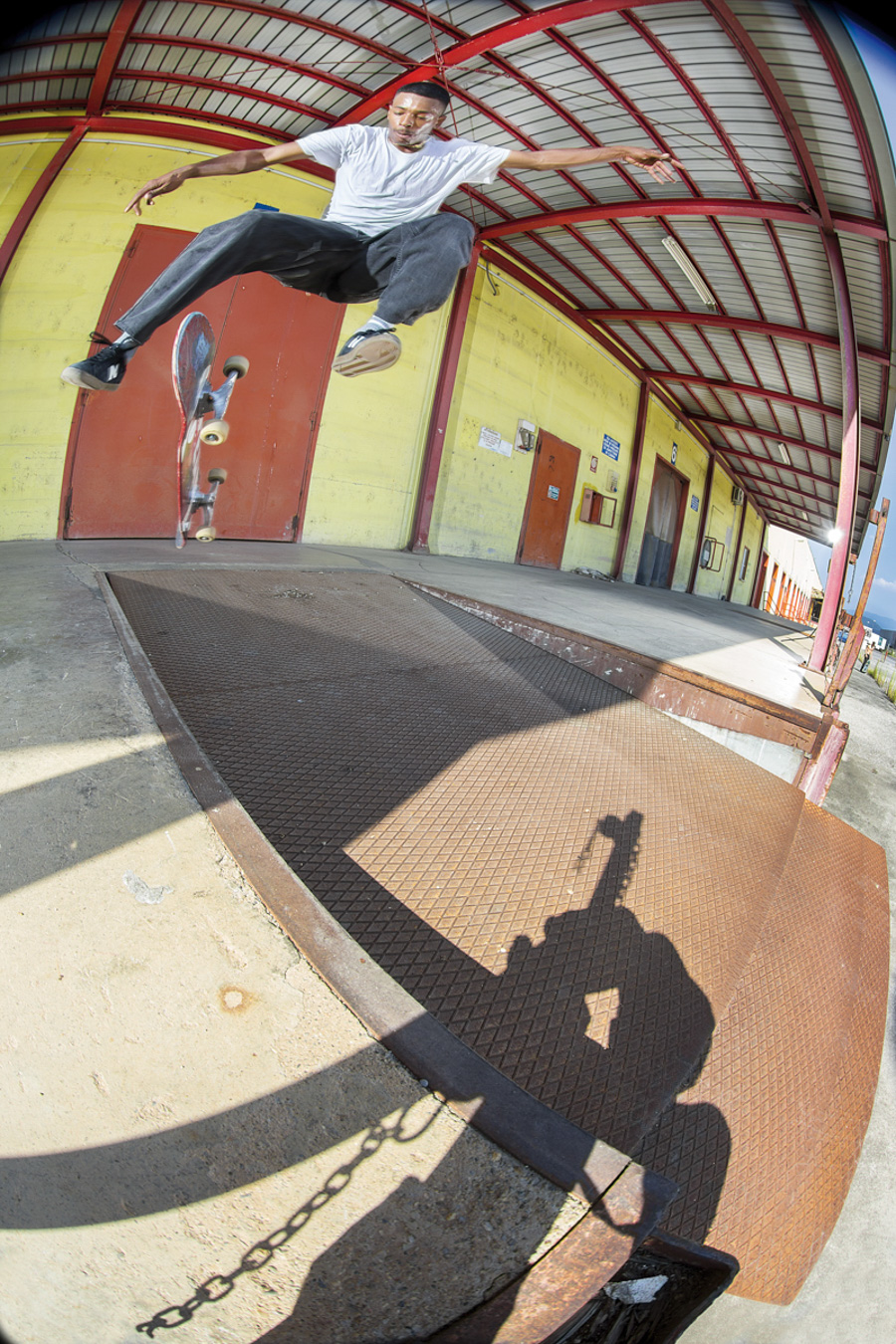 You know when you’re about to try a trick from something big but you’re not 100% convinced of landing it, or you’ve been trying something for hours and you’ve lost all hope? Well, if I’m in a similar situation Davide’s presence is all I need. It doesn’t take him much to convince me to do the trick. He’ll give me a very convincing two-minute speech, ending it with, “C’mon man, you can do this easily, and when you do it, I’ll find you a nice lady tonight and you can take her home, don’t worry.” Ha ha ha. The way he says it just hypes me up so much that I think, “I don’t give a shit, I’ll keep trying until tomorrow, until I land it, I have to do it for Davide!” His are magical words. He changes my mind from one moment to the next. It’s just one of the things he knows how to do as a person, besides being generous, hospitable, likable, and fun of course. I’m grateful to be able to call him my friend and to have spent lots of time with him skating and growing up over the last years. I’ve learned many things from him, not only tricks, but things regarding everyday life. As a skateboarder, he’s always been an inspiration to me and I have no doubt that he’ll become “somebody” in skateboarding. To say that he deserves it is an understatement! I suggest you read his interview, Davide is real! My G! (Massimo Cristofoletti). 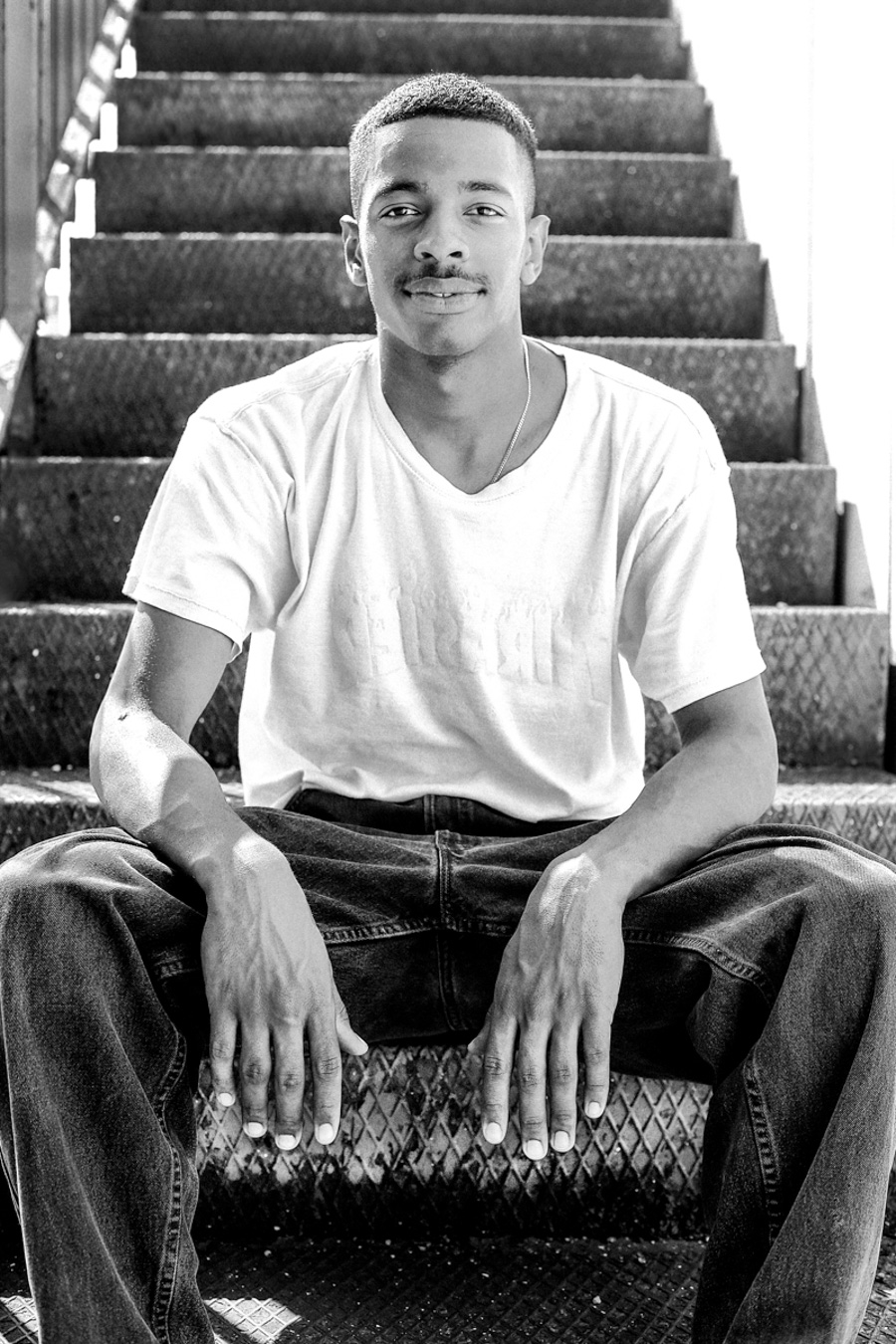 Hi Dave, how cool is it to be called Davide?
Hi Dave, it’s not bad, right? Ha ha ha.

Bolzano is a bilingual, medium to small city on the border with Austria. How’s it living there both in general and skate-wise?
Yes, it’s a super quiet city in the middle of the Alps. In the winter people go skiing and snowboarding and in the summer they go to the lake. It almost feels like living in a town. At times there may be tensions between those who feel more Italian and those who feel more South Tyrolese, ha ha, but living in a bilingual city gives you the advantage of speaking two languages. There’s not much for street skating, but there’s a nice skatepark we can’t complain about. A lot of people have started skating since the opening about seven years ago. 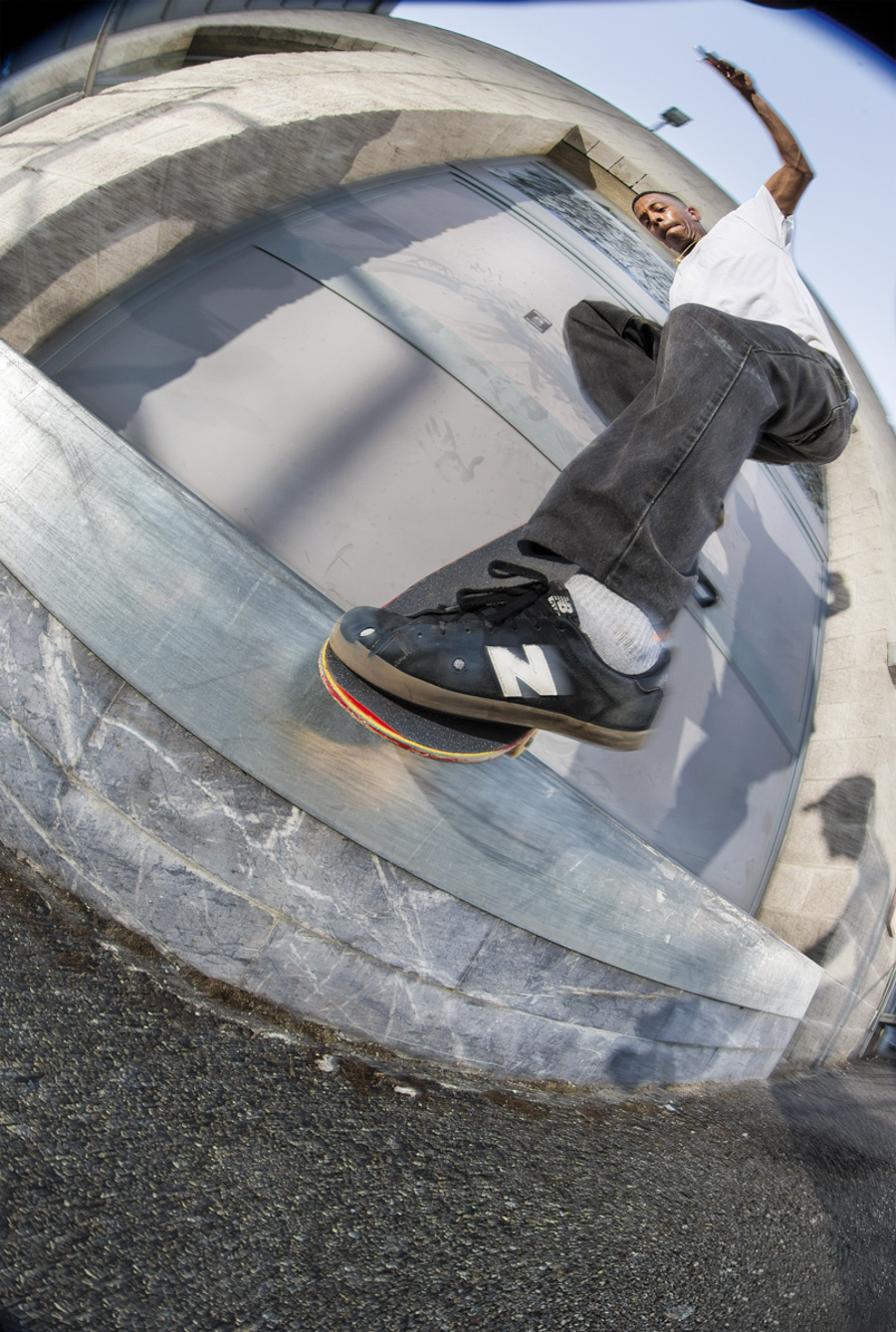 South Tyrolese skaters have always pretty much minded their own business, why do you think that is?
I’m not sure… maybe because in the past there were never that many skaters and before traveling they wanted to create a scene in their own city and have their own park. Mirko Obkircher, Marco Varrese, and Braian Londono are the ones who started traveling more.

What do you like and what don’t you like about skateboarding nowadays?
I love it, ha ha! It’s constantly evolving and limits are pushed all the time. I don’t think it has ever been so diverse. But there is so much content coming out every day on social networks, youtube, etc. that perhaps it’s easier to get lost. Unlike before, when there were only 4 or 5 new videos coming out every year, while now there’s 4 or 5 new videos every week and they often aren’t appreciated as they once used to be, unfortunately.

Last year you moved to London, why did you make such a cool, but also difficult decision?
It all happened pretty casually. At first I came to London to film a project with Nick Richards. Then my girlfriend decided to join me so we ended up moving here. It’s not the most convenient city in which to live, considering the fact that it can cost you up to 10 pounds a day to get around by public transport. But with another person it’s easier to get by, because you can share the expenses, ha ha. 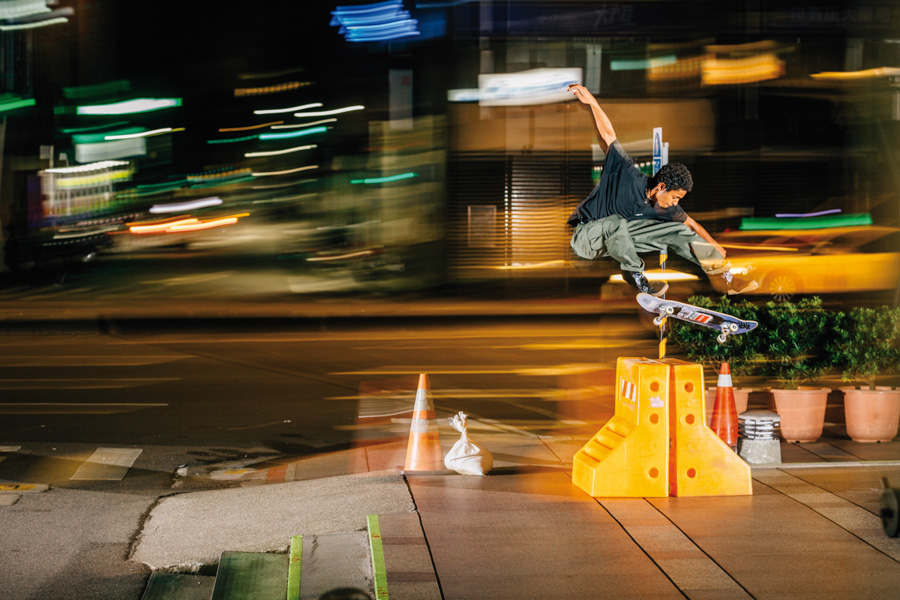 What’s it like to live in London?
It’s a huge city that’s always on the move and this motivates you to be more productive. Spots are so much rougher than in other places, but this also makes it more interesting. Even the way you approach spots is different and it often requires a bit of creativity.

How do you support yourself?
My friend Daryl Dominguez helped me find a job and introduced me to the guys at Bay66. I started doing some lessons at the park and really liked it. Apart from it being only 5 minutes from my house, I can choose my work hours, and a one-hour lesson goes by quickly. It’s basically the perfect job for me because I’ve got lots of free time to skate. Plus, New Balance also helps me out, without them I wouldn’t be able to support myself. 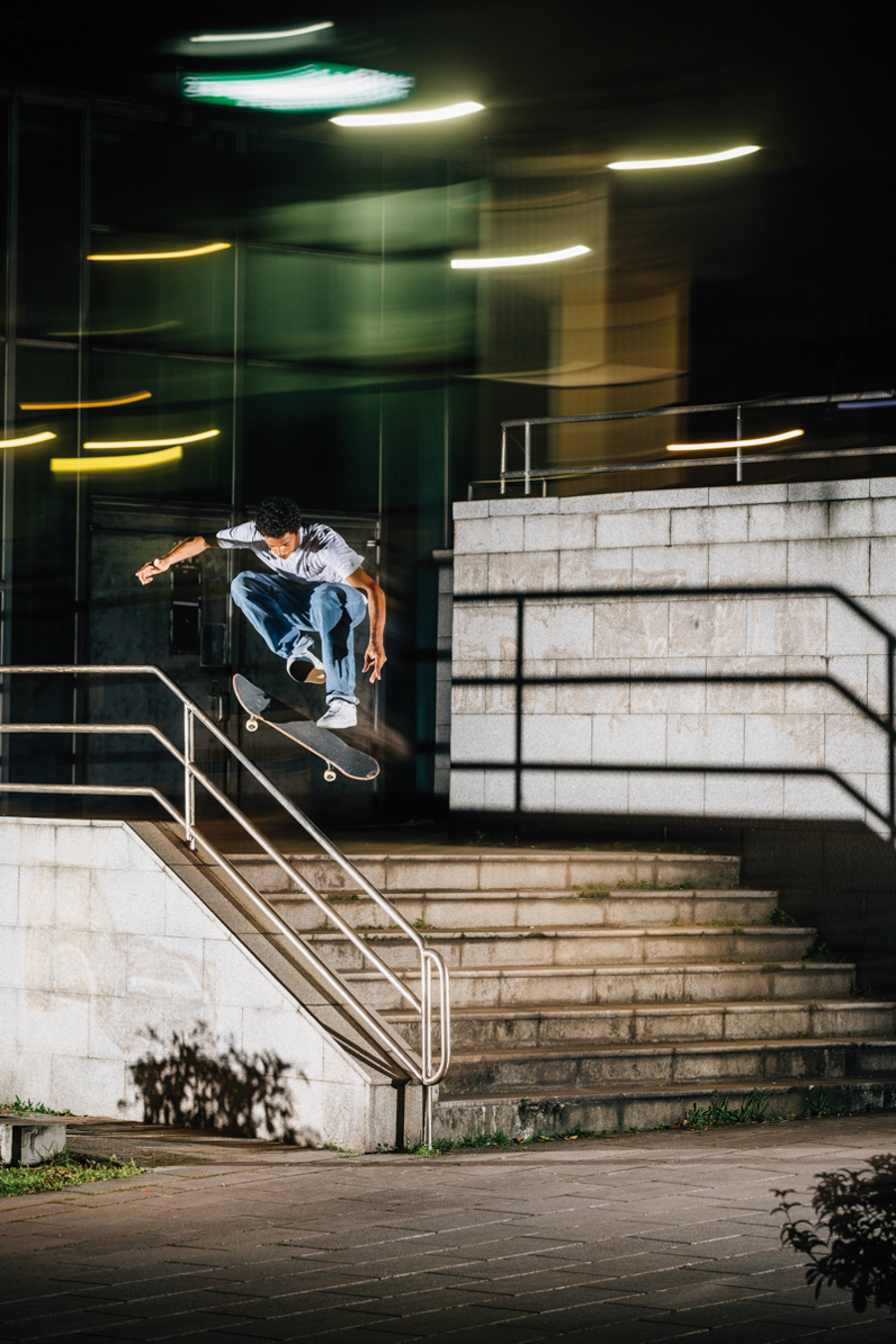 Your “Distance” part was filmed in a deserted, post-lockdown London and it’s really cool, tell us a bit about the ins and outs…
The project was concocted by Nick Richards who wanted to portray a deserted London due to the lockdown, when we’d be able to skate some streets that on a normal day would’ve been inaccessible because of too many people. We filmed it in a day. We met up in the morning, starting off from Oxford Circus and going all the way to Tower Bridge. Halfway through we realized that the footage we had gotten until that moment didn’t have any audio, so we had to go back and film the first part again. Then I lost a bolt and a wheel flew off, so we looked for it for about twenty minutes, unsuccessfully. Luckily though, Nick found a spare one in his bag. Then towards the end of the filming, my ankle started swelling up for no apparent reason. It must have been inflamed. So for the last few meters of pushing I suffered in silence. Apart from this there were no further complications, ha ha. And there were no police checks either, luckily. 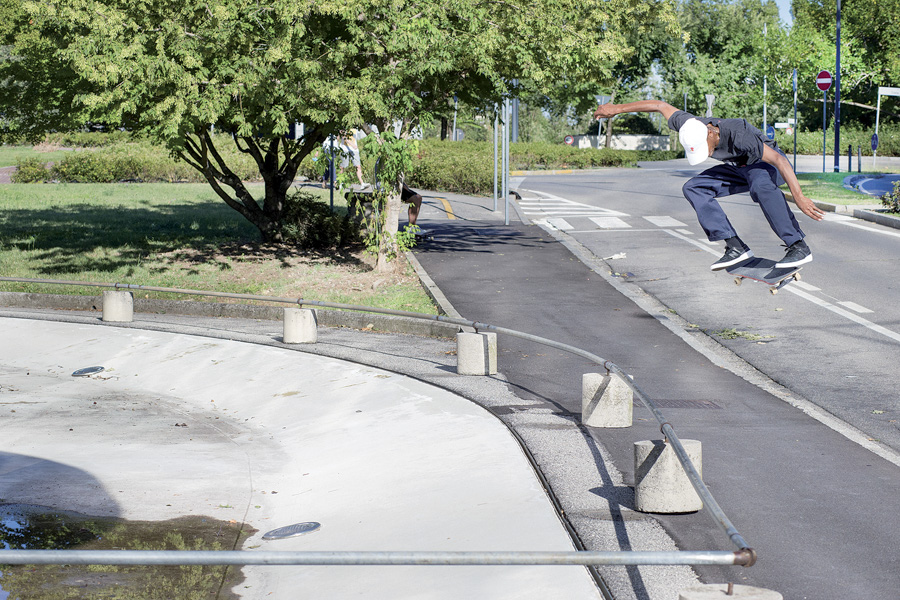 How did you cope with the lockdown?
I think it was a bit more relaxed in London than in Italy. We could go out once a day for physical exercise. However, apart from a few flat seshes under my house I spent most of the time at home watching one TV series after another. Obviously, after some time, I had to try to skate in the house like some pros on insta were doing, but I ended up breaking the small table in the living room, ha ha. When I returned to Italy after the lockdown, I had to quarantine for two more weeks in Bolzano.

I know you’re filming a full part with Nick which is almost ready… can you reveal anything about it?
It’s not finished yet, it’s all filmed in London spots and hopefully it will be released before the end of the year.

You were telling me that you also took part in two other important projects?
Yes, it’s “Nocturnup” a project by Nick Richards where basically we go to a city for two weeks to film only at night. We wake up at 8 or 9 pm, have breakfast and towards midnight we go out. We skate until the sun comes up, then at 7 am we have dinner and go back home to sleep. On weekends instead, we have breakfast and go straight to a club to party, ha ha ha. 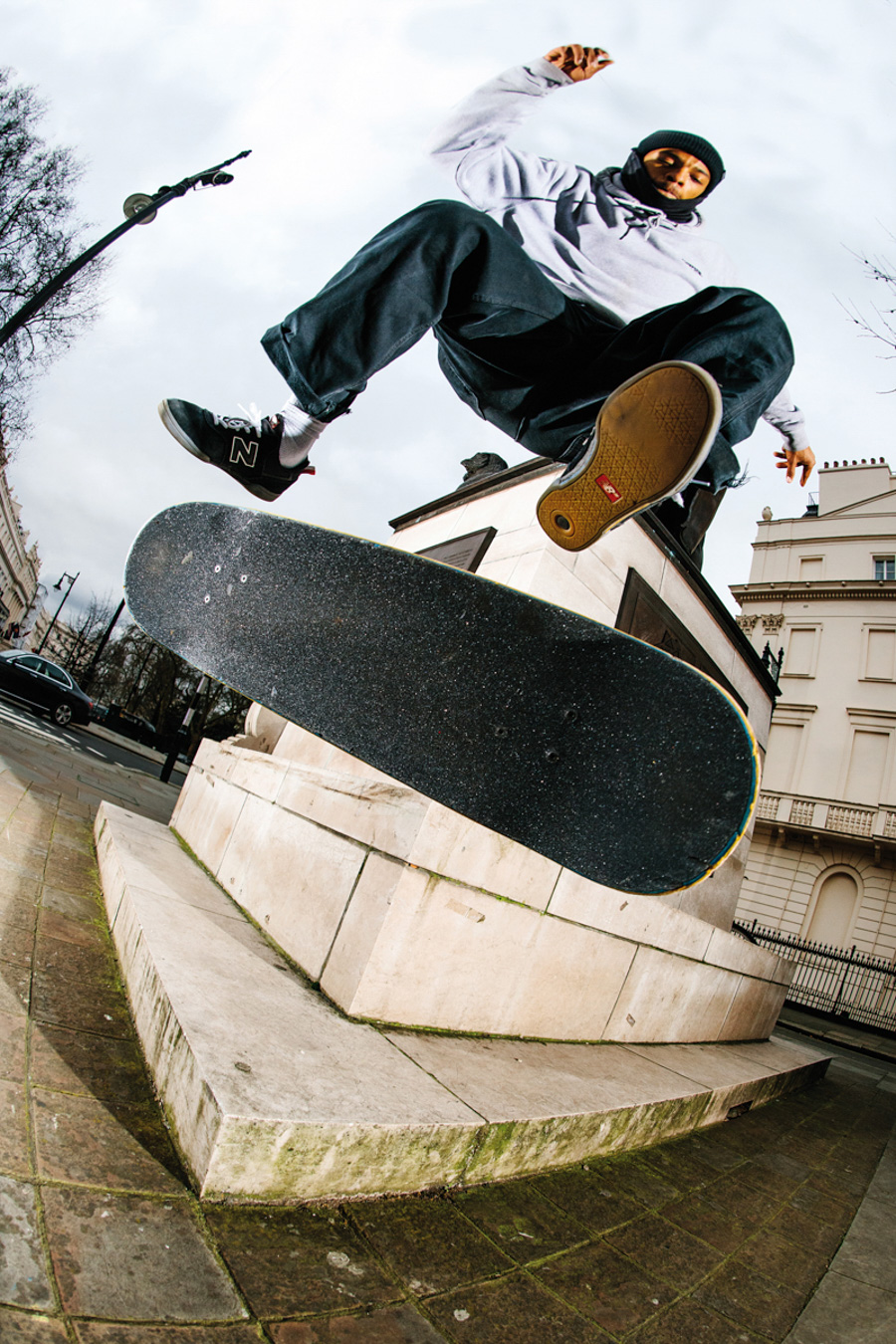 If you want to skate you need to travel, but people like to complain and they don’t have the courage to just grab a bag and go somewhere. What would you suggest to someone who would like to do that but doesn’t have the courage?
If you really want to go somewhere just do it without giving it too much thought. Some cities often don’t have enough to offer so instead of sitting on your ass and wondering what it would be like to live somewhere else, it’s just easier to just go. There’s really nothing to lose. There’s experiences to be had, plus if you skate it’s very easy to meet new people anywhere you go. Money isn’t an excuse either, because you can always find a job there. 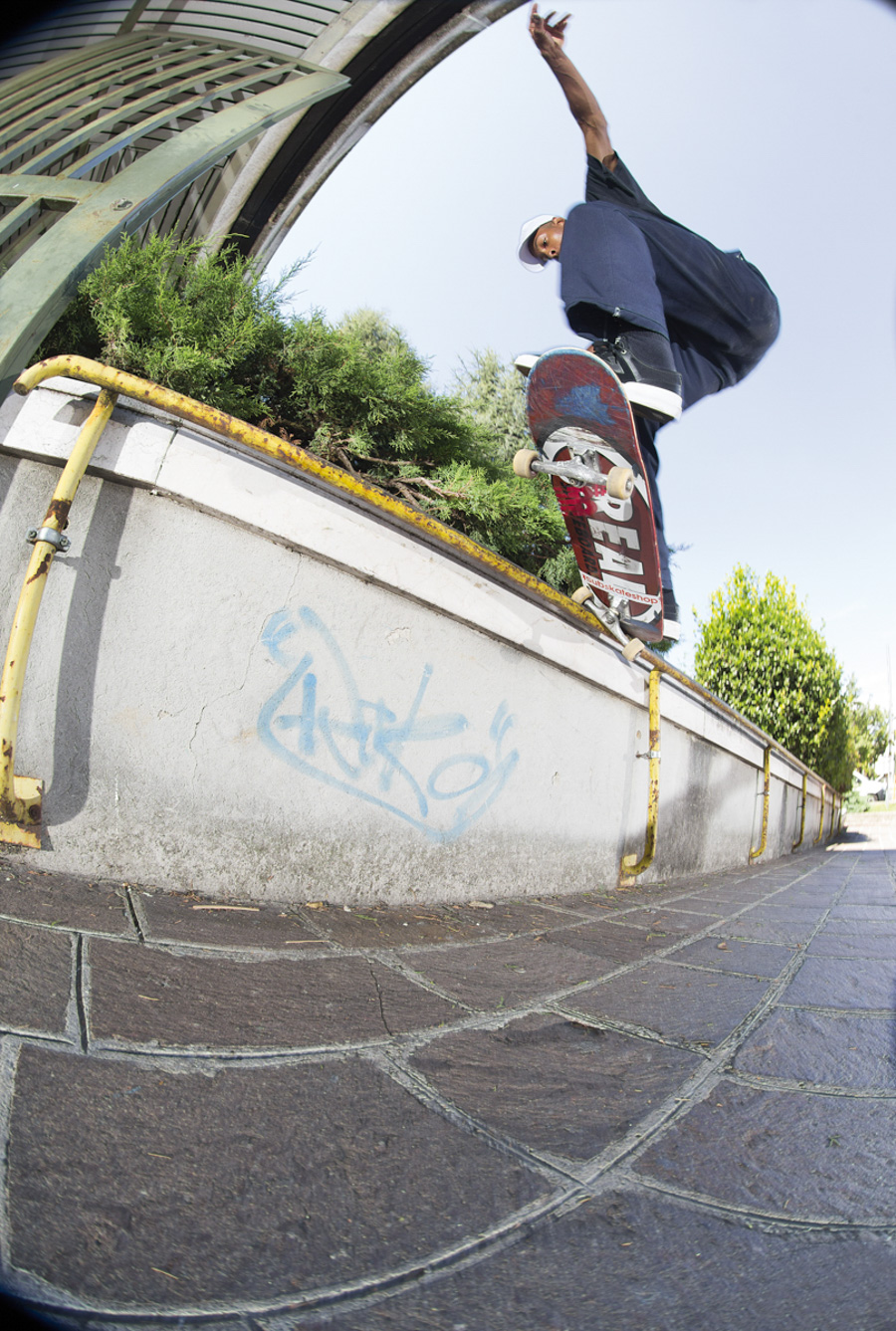 You’re part of the European NB Numeric program, how did that happen? Besides this year being kind of “unusual,” you’ve always gone on lots of trips and have collaborated on interesting projects…
Before getting on the European program I skated for the Italian NB Numeric team for a year. Then it took a super unexpected twist from there. I must thank Gregor Niederkofler, Mark Baines, and Dave Mackey! The first trip I went on with the team was to Palma de Mallorca and unfortunately, out of 5 days we were there, it rained for 4 and a half days. Then we skated in Stuttgart for a few days. That’s where I met Karl Salah and Dom Henri. This year went by the way it did unfortunately, but hopefully next year we’ll be able to travel again. 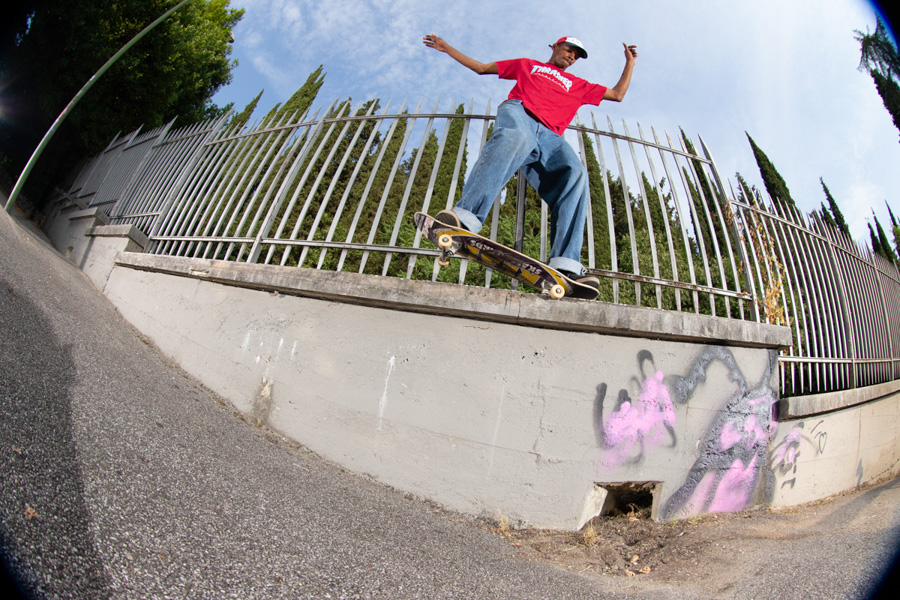 In the last few months there has been a lot of fervor surrounding the Black Lives Matter movement, what’s your take on the issue?
It makes me sad that this movement still exists today and that all this fervor has only surfaced in the last few months, while the black lives matter slogan has existed since 2013 and slavery has been around for over 400 years. Maybe police brutality concerns the US more, but unfortunately there is racism everywhere. It’s good that there are all these protests, but one must be coherent and careful not to use certain words, for example. I really hope it’s not just a temporary fad. 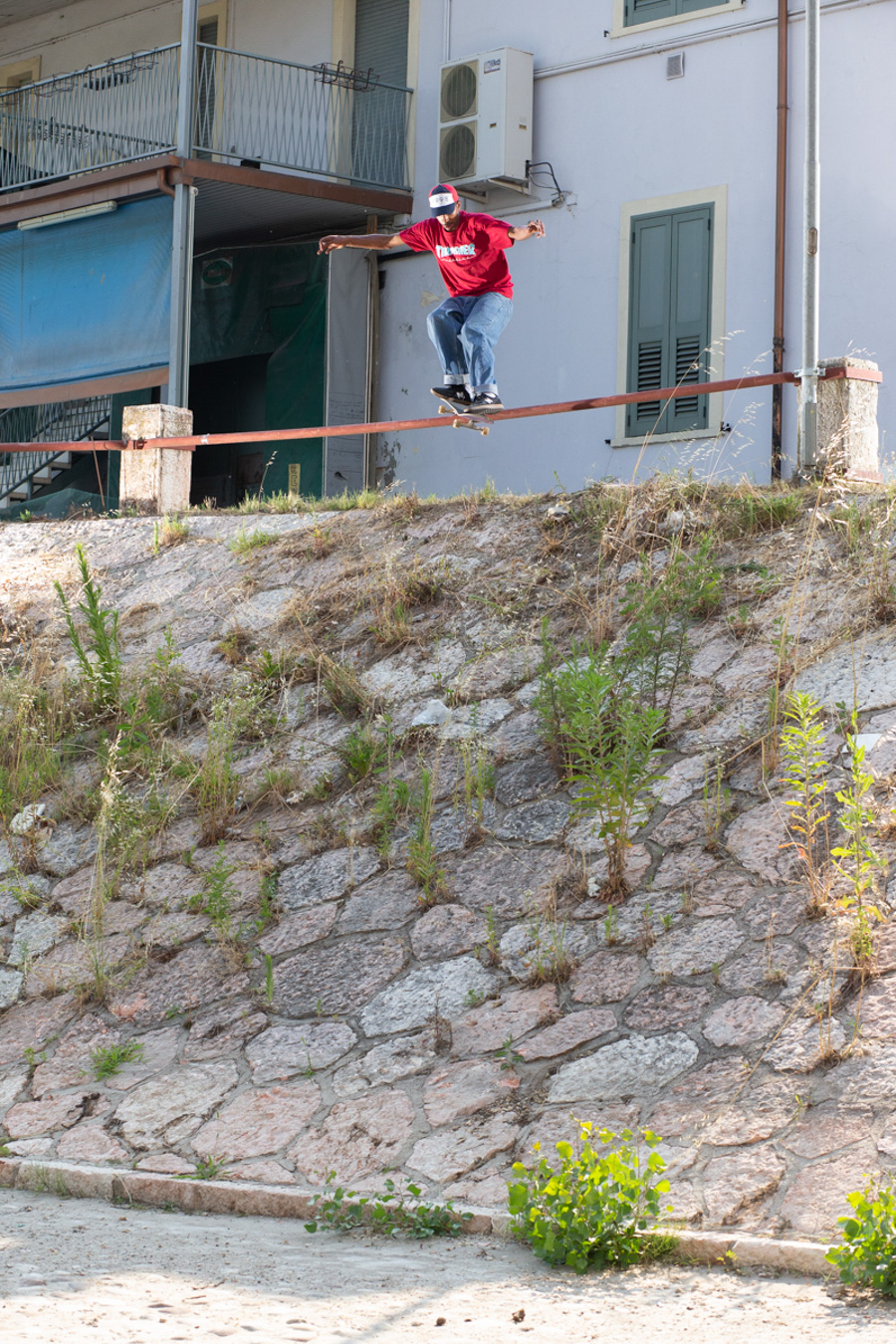 As a child, what did you want to be when you grew up? And now, apart from becoming a Tik Toker, do you have any dreams for your future?
When I was little I wanted to become a dentist, ha ha ha. Today, even if my career as a Tik Toker is very promising, I would like to finish school. Then I obviously want to continue skating, traveling, and filming. I’m very interested in photography lately, so maybe you could give me some advice, ha ha. 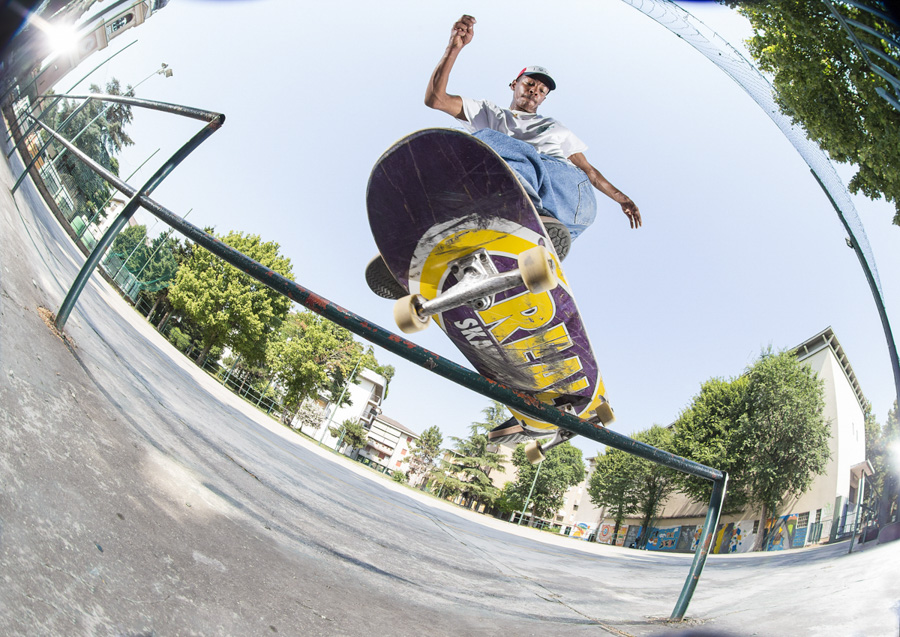 You want some valuable advice on photography? Become a dentist, ha ha. I’m giving you 30 seconds to convince me that trap music doesn’t suck. Ok, time’s up.
Nah, trap music’s already a thing of the past, ha ha ha. 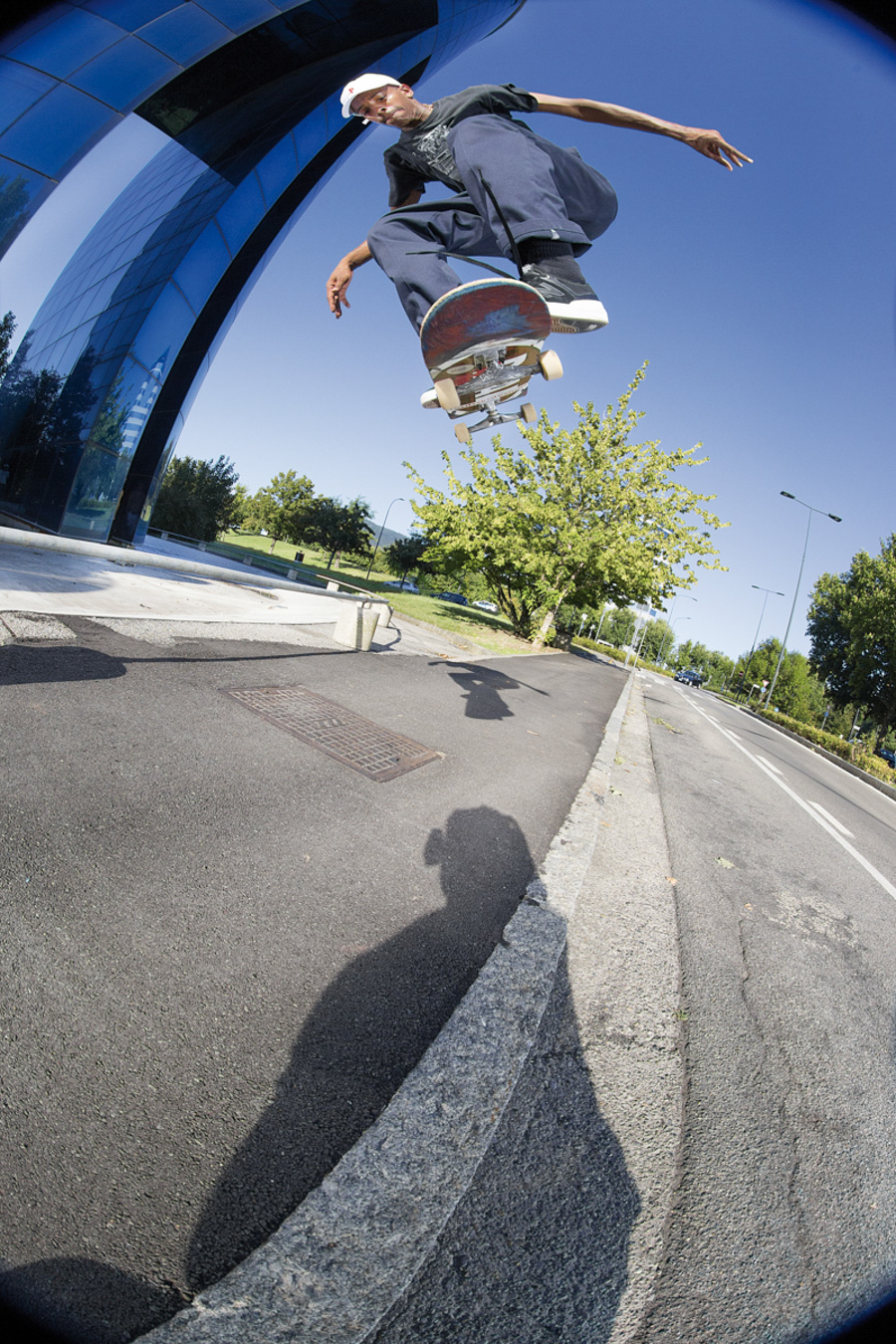