Danny Gally is a real skate rat, in the most positive way. He can skates whenever and whatever, always happy to be segregated in a stinky van on the way to go skate something new. Pretty standard right? This summer, after a long winter of recovery from a broken ankle, Danny is gonna drive the van again, skate, film and shred anything you put in front of him. Everybody loves Danny because when you see him throwing himself down a hubba or killing some transitions (hey, he is a mini ramp champ, don’t forget it!) you can see the sparks of the pure passion for skateboarding. G.B.

Hey, what’s up Danny? Are you at the skatepark as usually?

Hey mate people want to skate today so I guess I had to keep the skatepark opened! Ha ha.

What’s your deal about the skatepark closing on may 29? Are you happy about it? We know you will loose your job but at least your girlfriend won’t break up with you and your friends would start to see you again outside that indoor place!

Ha ha ha actually I’m really sad about it… I hope we can have a new indoor park in the near future here in Milan.

How long have you been working at the skatepark? Is it a cool job?

I have had this job for 2 years now, I would say it’s the perfect job for me, sometime I get to stay there for too many hours but I enjoy it and I’m happy with what I do.

This kind of job lets me skate, organize my schedule and my free time; I don’t have any other jobs behind this one so I can always go skate, make plans and go on skate trips.

It’s really a bust that the main italian indoor park is closing, what do you think it’s going to happen when winter time comes back and milan won’t have a indoor park anymore?

I think milan without a indoor park is a real sadness… I guess we will start to see people skate under the arcades of the city again. 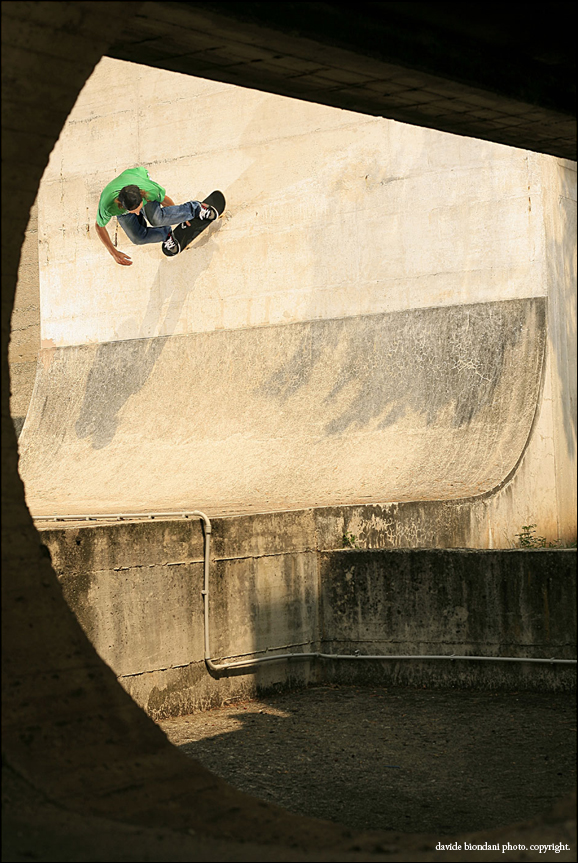 Tells us more about your new video part, what’s it about? When did you filmed it?

Let’s say it’s not a real part, during my injured time at home I was going through all my footage and with the never used one I put this part together.

Watching you part, I saw some other skaters from the DC Shoes team and some tricks with Julien Bachelier filmed on a miniramp, where is that place? It looks an abandoned place!

Last year I was on a DC tour in Lyon but we got rained out pretty much everyday. Julien saved us bringing us to that abandoned factory where they built this crazy mini ramp; really steep with pool cooping, a sick and fun session went on! So I decided to put it in the video as more footage from other dc riders.

You put the clip where you hurt your leg too… What happened that day? I bet it was a lot of pain for you.

It was at the bastard bowl at the end of a good session with some friends.

I was trying to film a line that I had already done a few times and the fs ollie disaster was the first trick of it. It was a bad fall, I should have stopped skating way earlier since I was there for too long but as usually you always want to try your last trick but this time something went wrong and I broke my malleolus. I went to the hospital and I had surgery since it was a really bad fracture. 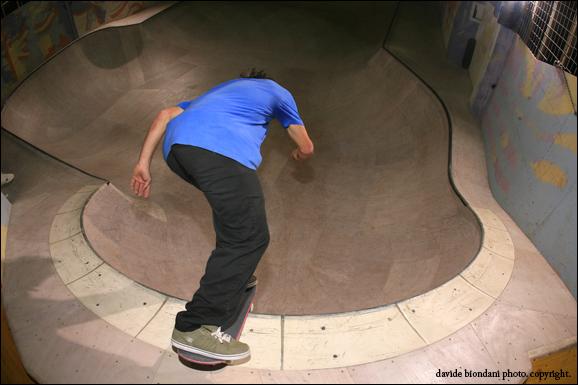 It’s been a few months now from that day, how are you feeling and how is your leg doing? How long did it take to get back on board?

Five moths exactly from that day and I put my fetes on board after two and half months. At the beginning it wasn’t easy at all since it was like I had to restart from the basics, now I feel good, I’m not 100% back but at least I can skate now and I have got a good control of the board back. That’s why I’m positive and hyped. At the end of the summer I’ll have one more surgery to take the plate out from my leg and I’ll be back.

What are your plans for this coming summer?

From may to the end of the summer I have a lot of tours going on so I will be around a lot but I still will have time for myself, I want to travel, have fun and skate as much as I can as I always have done!

Alright, this is it. Want to say something more or say ciao to someone?

I want to thank my family, my lovely girlfriend Bea and Giuliano Berarducci they helped me out a lot during my injury, all my friends, Angelo and the Trinity skatepark, my sponsors (Bastard, DC Shoes, Dakine, Blast/Almost, Skull Candy) that are letting me doing what I’m doing.

I will see you soon mate!

Bye-bye everyone and see you soon!