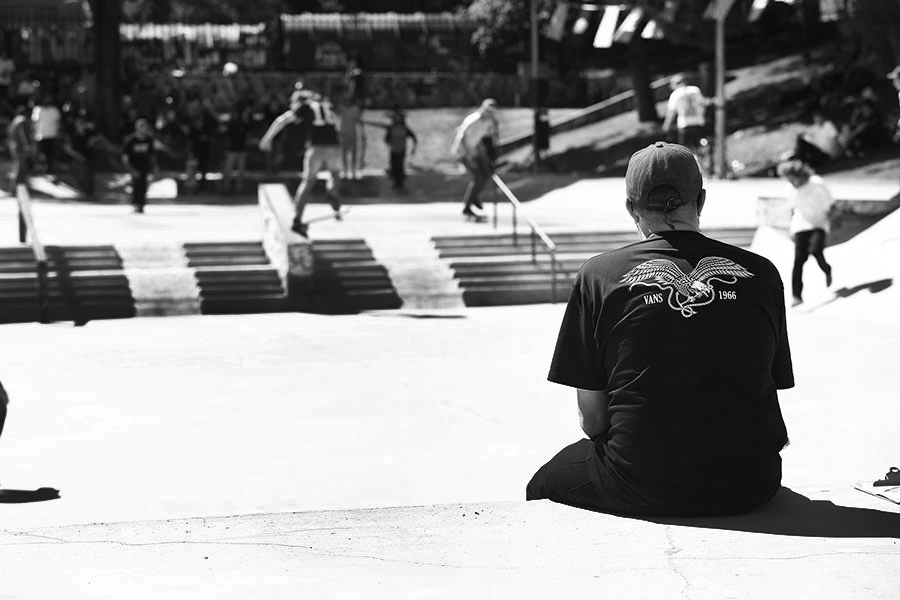 The simple things are the best things, in skateboarding like in real life. You know, the cornerstone of the skateboarding industry is the skateshop. A good skateshop can save a city with no spots for skateboarding, it can kick-start a talented kid into the skateboarding world, or simply, a good skateshop is a place where you can feel yourself at home. A lot of times, a skateshop is still the purest form of business in our skate world. And kids love skateshops! The good guys @ Vans chose to give something back to the skateshops, and after a national circuit all around Europe (and Israel), the finals took place in Madrid on a sunny weekend in a good skatepark full of street stuff to skate, and a bowl complex that was fun as hell. On Saturday everybody skated for the best trick contest on rails, stairs, or got tech on the manual pad and ledge. Saturday was the day of the finals, as you saw during the live stream (with Flo Marfaing & Josh Young as hosts !!! Beat this!), and the teams were on fire. Everybody skated well, and even if the skate level was so intense, there was fun in the air. You feel good when a homey lands a good trick next to you. At the end of the day, the Titus team won the competition with incredible runs. From tech to gnar, they have it all, and they skated their asses off for this, even without a team rider, so the team manager had to skate… and what a team manager he is! The present and future of European skateboarding was there… and the future looks bright! You know what? After 2 intense days of skateboarding, and after the finals were done, a big group of skaters found a good rail near the skatepark… and they skated it! The shuttle had to wait and nobody cared, ‘cause they were skating, and everybody was cheering the Greek guys to land their tricks! 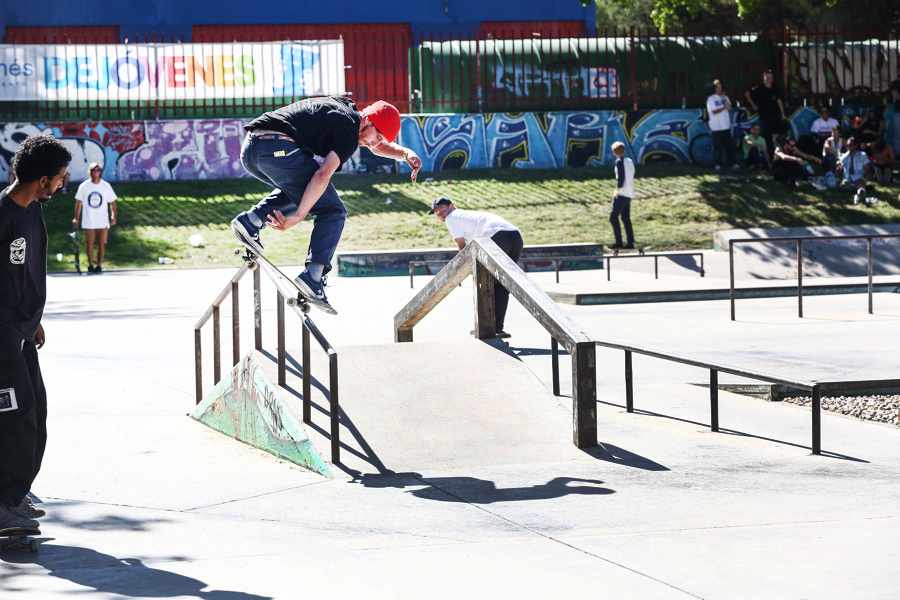 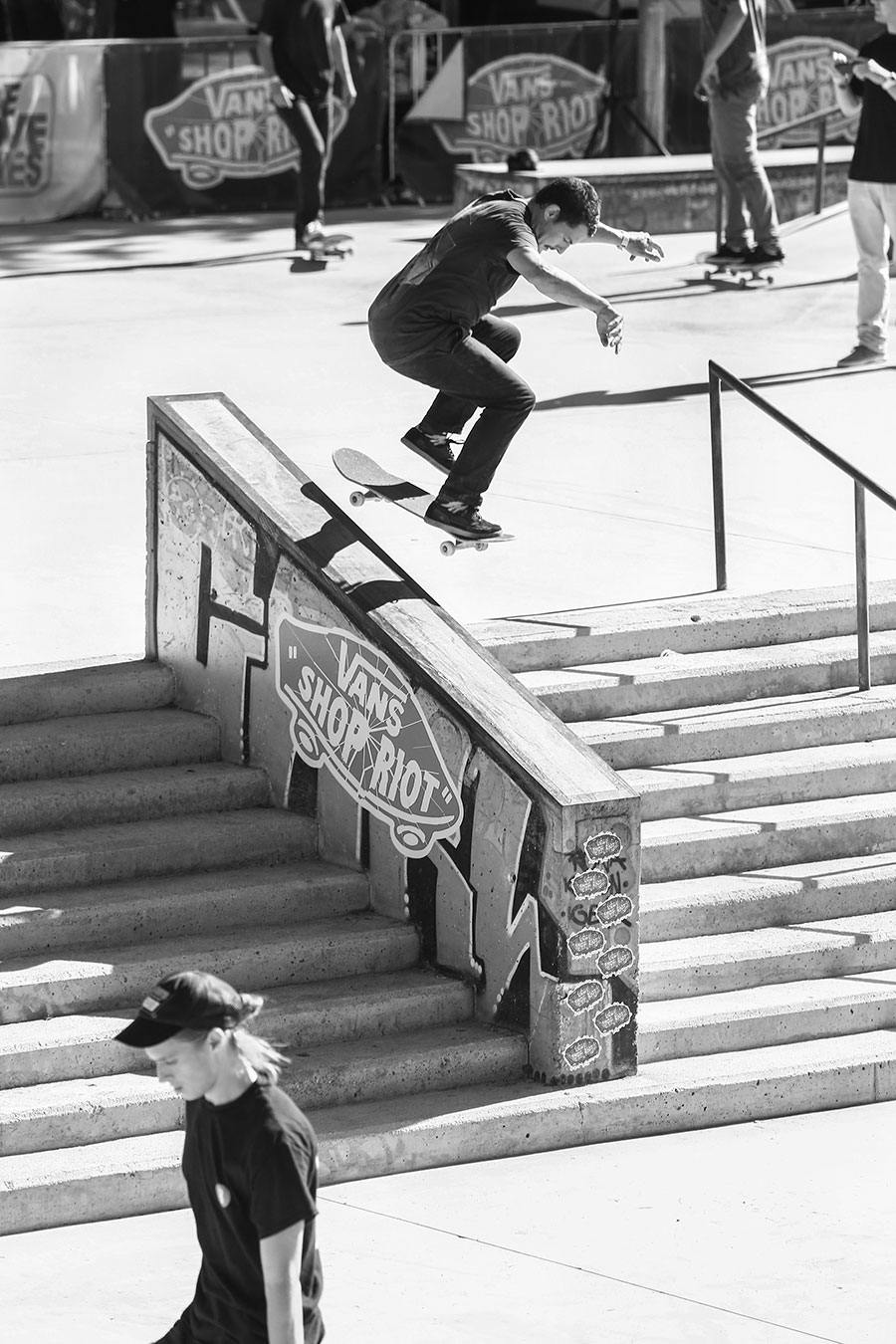 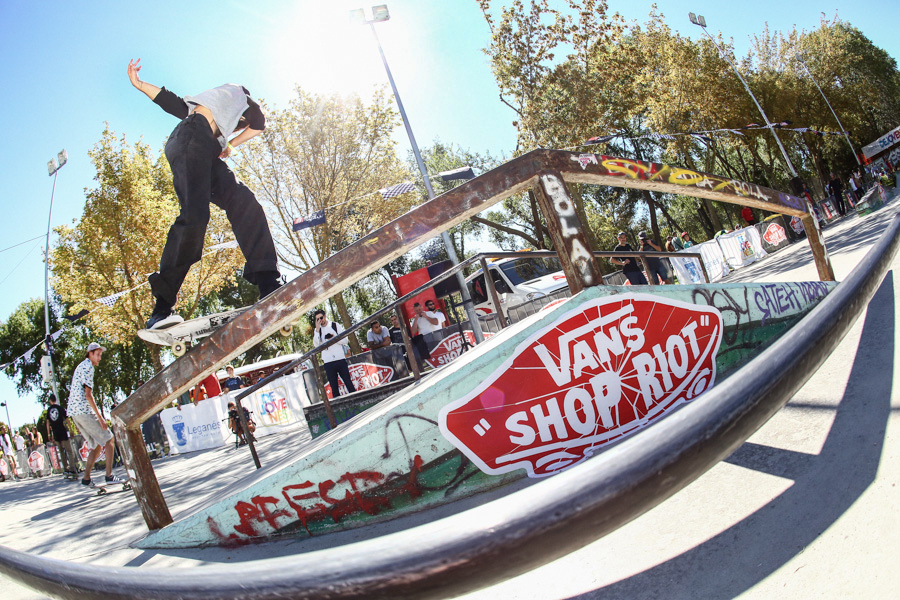 You’ve witnessed the evolution of the Vans Shop Riot… what do you think about this type of contest?

It’s rad man, I myself am a shop owner, 50-50 Skateshop in Bristol. We take part in the competition and we like it. You know, Vans doesn’t ask for anything, they just give back, to skaters and to the shops that get involved. We’re in Madrid and it’s fuckin’ sunny, the park is fun and we’re skating and chillin’, so it’s all about having a good time. And Vans is good at that, and I’m not saying it because I work for them, but because they’re good at giving back to the shops, to the skaters, and the community. Think about the Vans Downtown Showdown, they give it for free, they don’t charge people to watch the competition. Great skateboarding, good music for the people. The same goes for the Spring Classic in Italy that happened this summer. These are good things that Vans gives to the skateboard community. And with the Shop Riot, the shops involved have a good time, skate, have free drinks and free food.

And everything is organized so well!

Yeah, we try to not stress people. After five O’ clock everybody is gonna chill, eat some bbq, and shoot paint-balls.

Do you have a favorite team?

I love Dor from Israel!! He looks like Shaft! Do you remember that 70’s movie? He doesn’t give a fuck about anything, he just skates. But it’s difficult to choose, you see people from all over Europe, new faces, new good skaters. The level of skateboarding is rad, and everybody is having a good time.

What’s next for Vans Europe! We want a video!!

Phewwww talk to Alexis, man! Ha ha ha. We have a lot of things coming up. There’s gonna be some really good trips to make some good video stuff, but we’re still planning. For sure some good trips! We’re trying to involve the different local teams in a European project all together. That’s all I’m gonna say for the moment, ha ha ha!

I love the Showdown too, man! But you have to talk to the people upstairs, ha ha.

And what’s next for you?

I wanna skate! I wanna get healthy so I can skate again. I just filmed a videopart for a UK brand called Skateboard Cafe. I filmed a guest part and they gave me a guest board. My good friends own it, and they’re doing well. We received good feedback, people liked the video, so I’m happy. It got me hyped to go skate and I just wanna skate… I’m 40 but I feel like when I was 18, ha ha ha.

Thank you man… see you at the bbq? 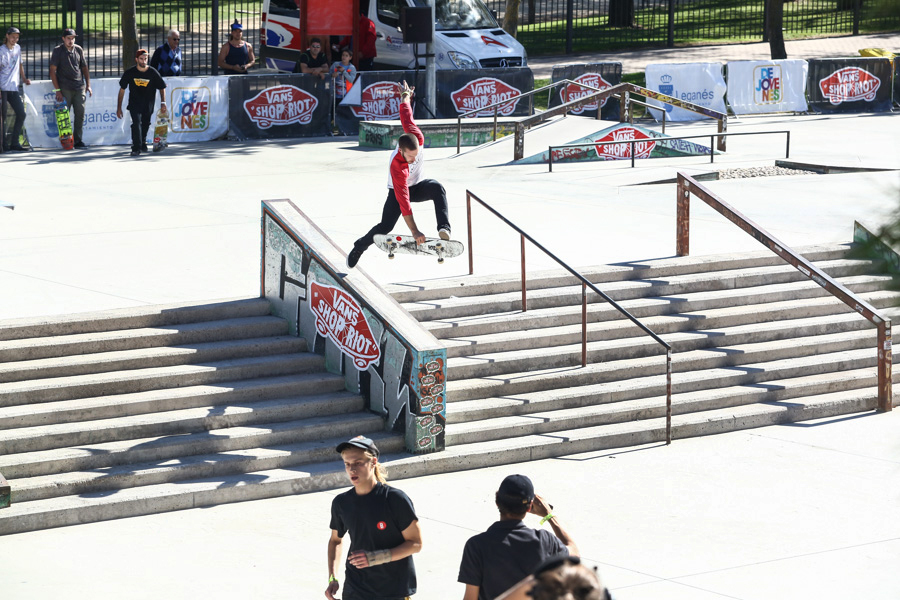 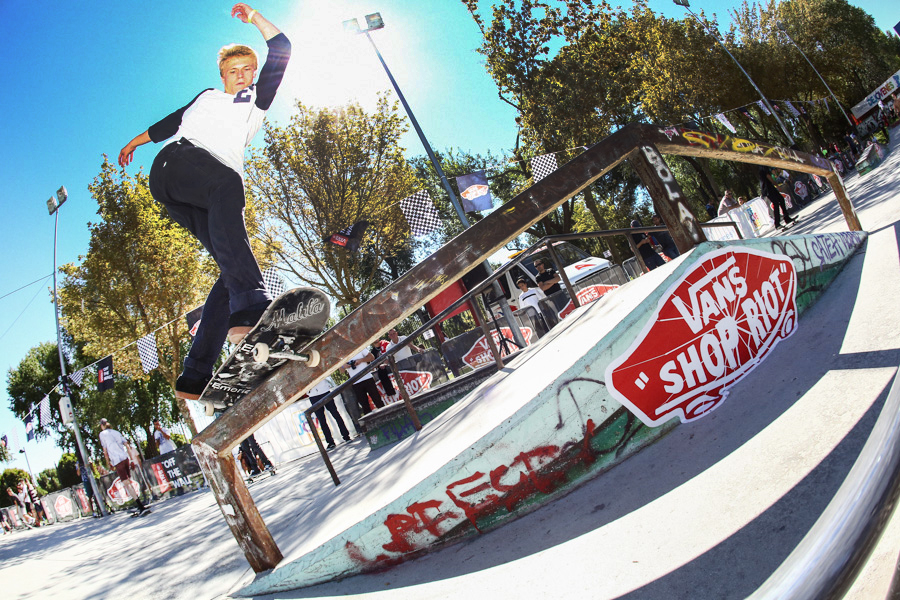 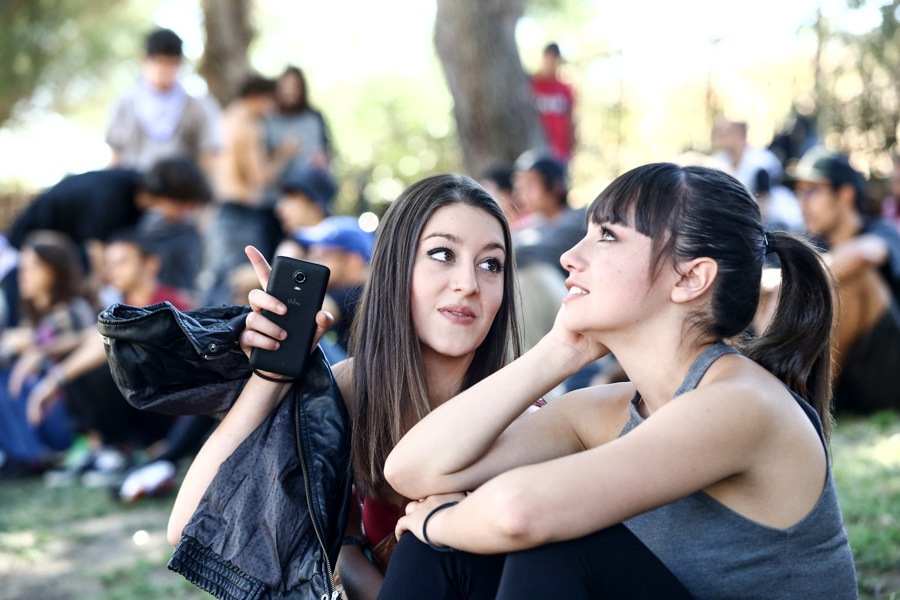 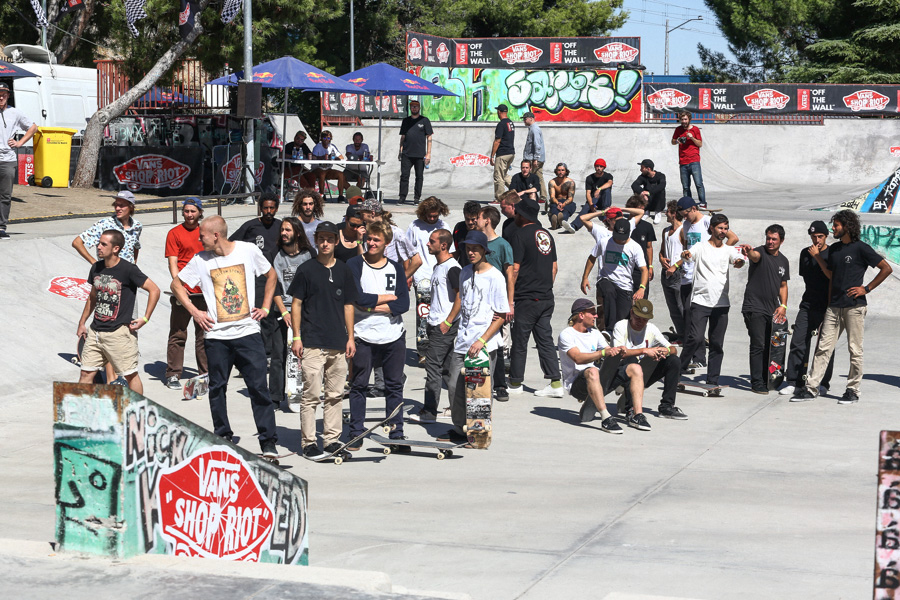 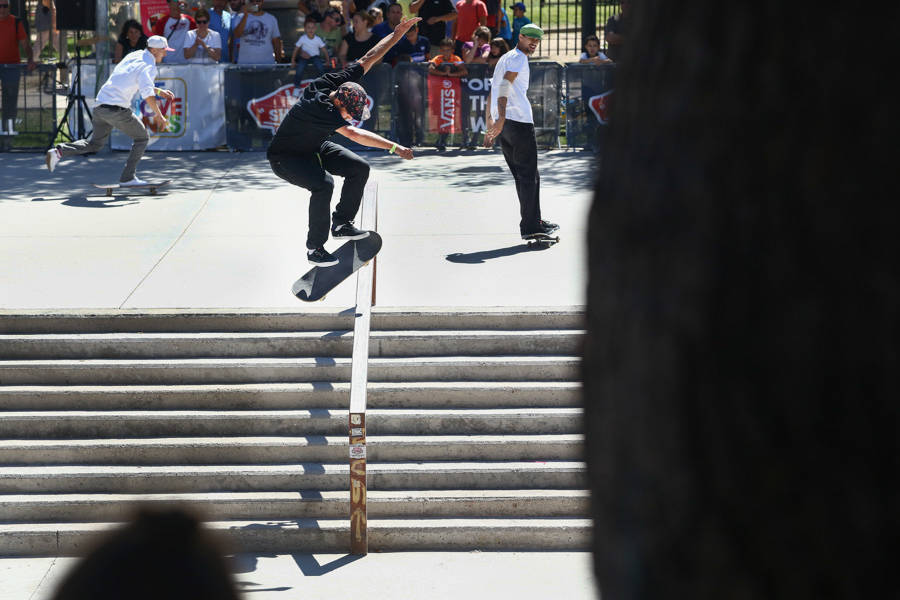 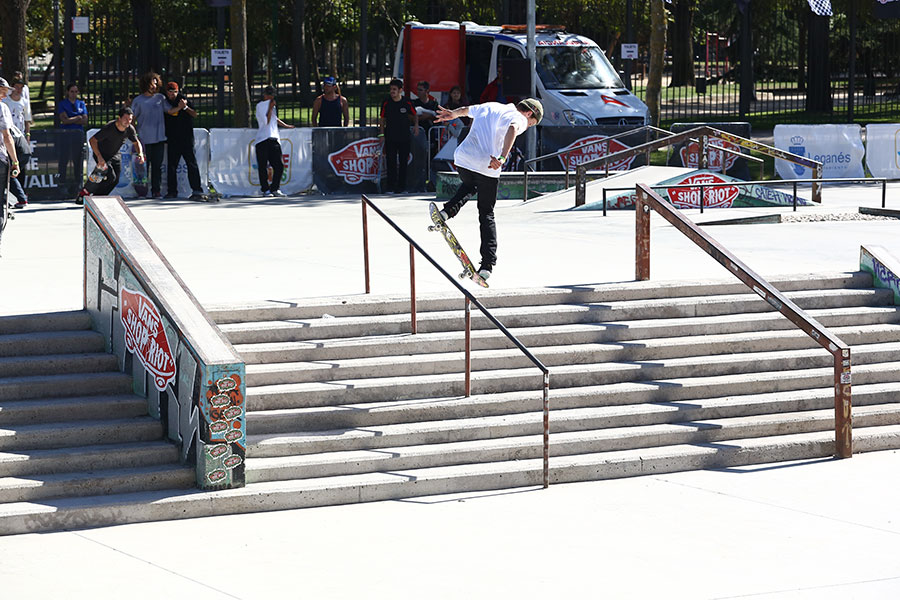 Hi Oli, why did you choose Madrid for the finals of the Vans Shop Riot?

We love to move the finals around every year, and Spain is always a good choice for skateboarding and events, there’s a strong shop team from Madrid, so yeah, in 2015 we’re doin’ it in Madrid.

So for the first time we’re under the sun versus an indoor park?

Yeah, the park is so good, and it’s 28 degrees so we’re lucky. In Benelux we can’t organize anything outside, so we chose to enjoy the summer this year.

What was the hardest part of organizing and promoting a contest like this?

I guess where we are is a little bit far out, so we organized the bus and shuttles to bring all the teams and the media here on time, and it’s a lot of people. We also worked with the local shops to get them to know about the event, because this is a real core event, and it’s all about protecting skateboarding and looking out for the guys that make the industry what it is, and that’s the independent skateshops, and it’s a pleasure to work with them at a core event like this.

I know that you’ re one of the main guys behind the event, but what is your favorite team?

The Coyote Grind Lounge team is comin’ hot, they killed the Scandinavian competition last week. I can’tremember the guys’ names, but they’re nuts!

And you also found the time to enjoy the bowl!

Ah ah ah aha, yeah a little bit. I’m more a street skater but I had some fun in the bowl.

This is the last skateboarding event of the year. After the contest we’re gonna concentrate on other stuff, like filming videoparts, working with the team to organize tours and stuff like that.

Something is changing, I can’t tell you what, ha ha ha. We’re looking to introduce a new competition format, something more like a touring concept worldwide. It’sgonna be exciting. It’sgonna be Vans’ 50th anniversary, so it’s gonna be an exciting year for Vans. Obviously, skateboarding will be at the epicenter of what we will do. 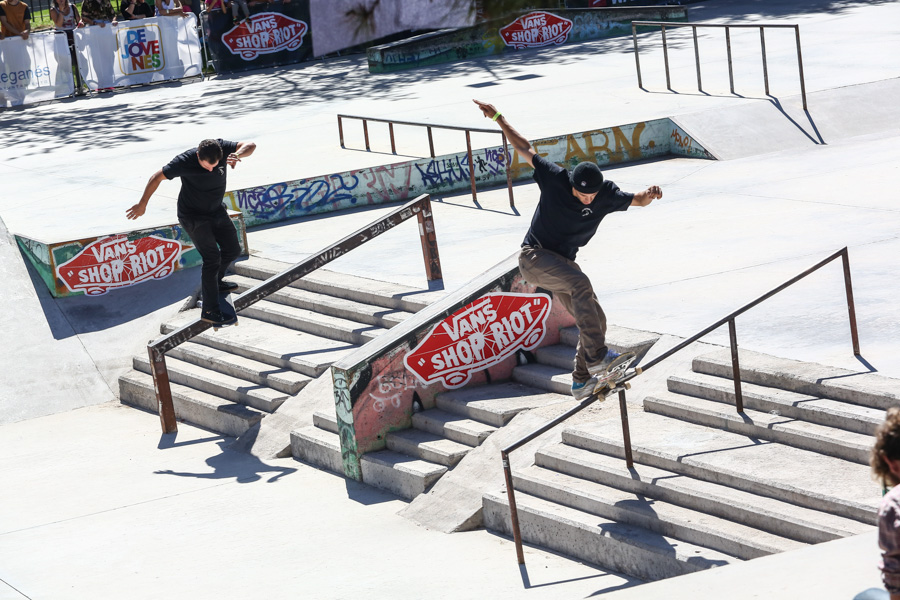 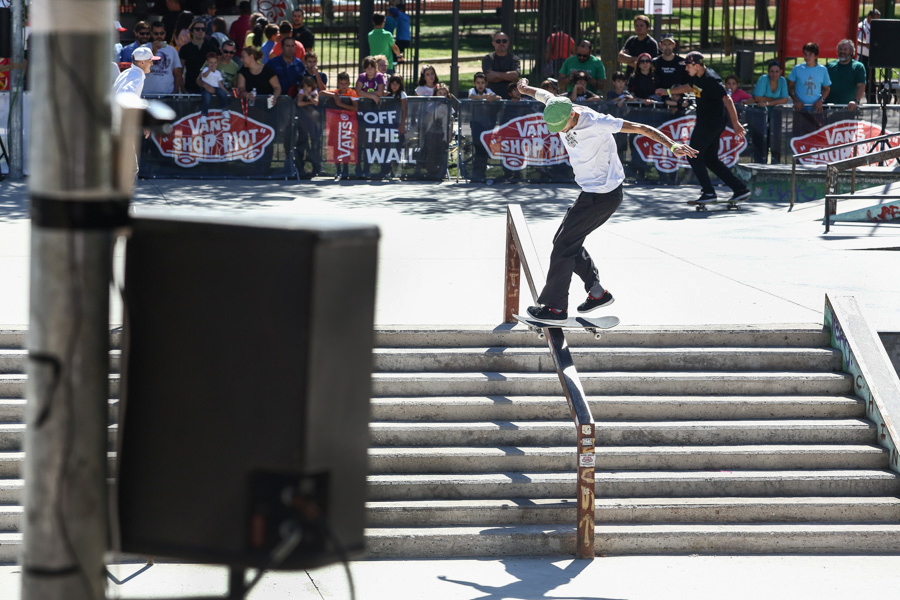 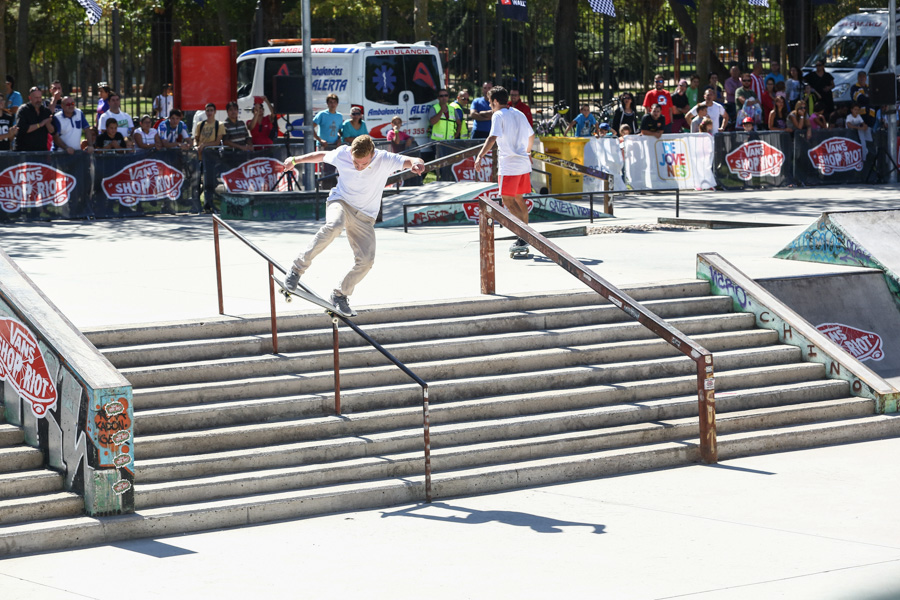 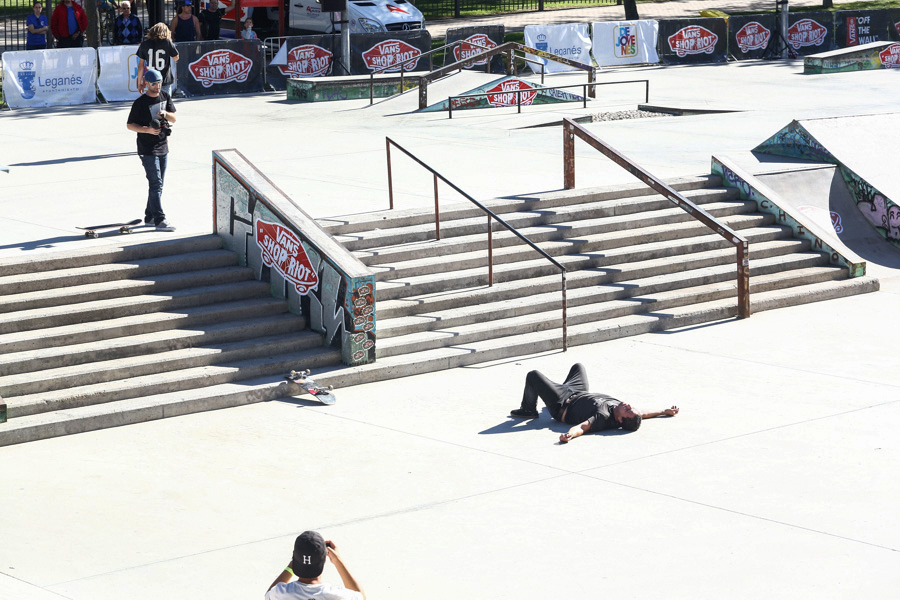 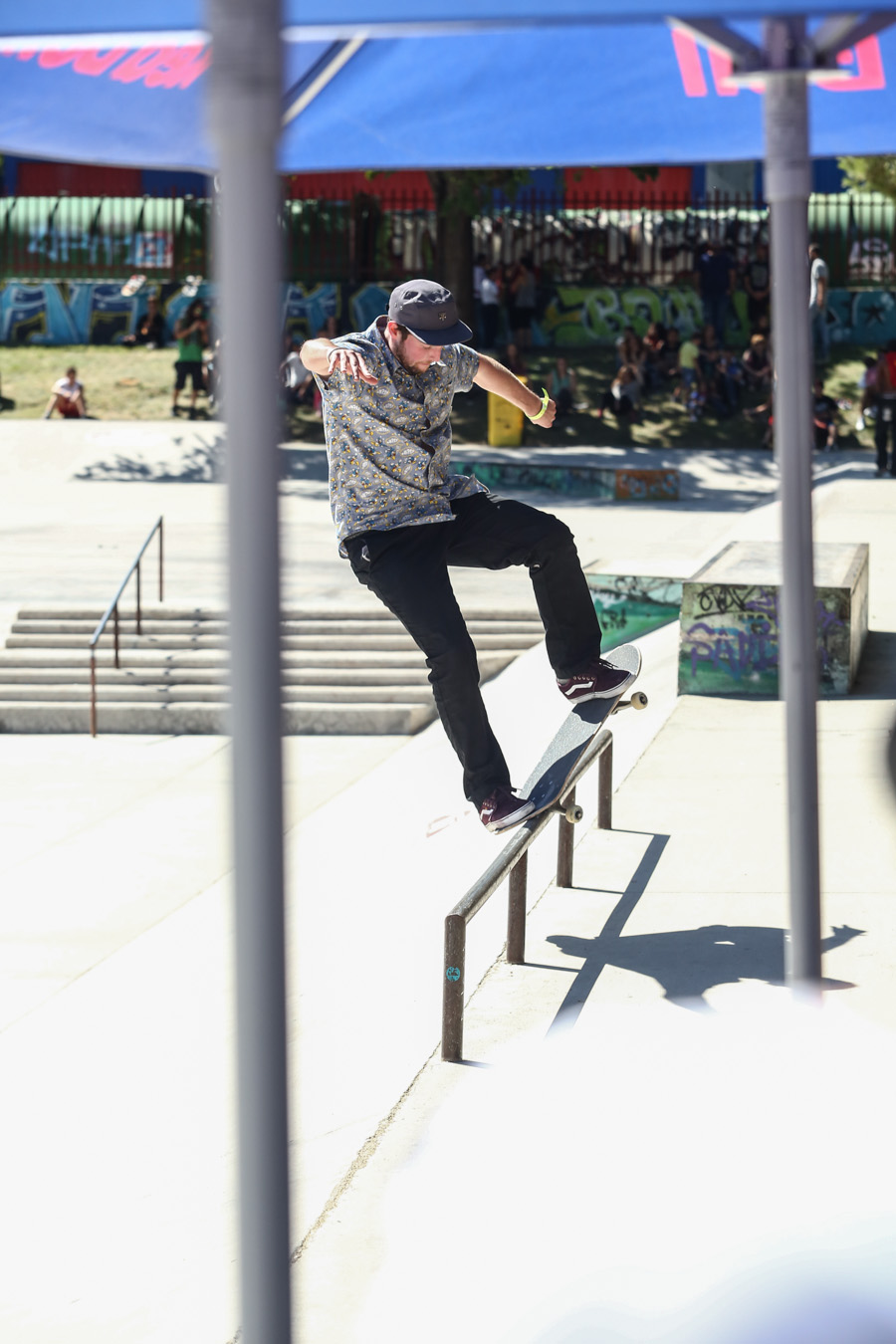 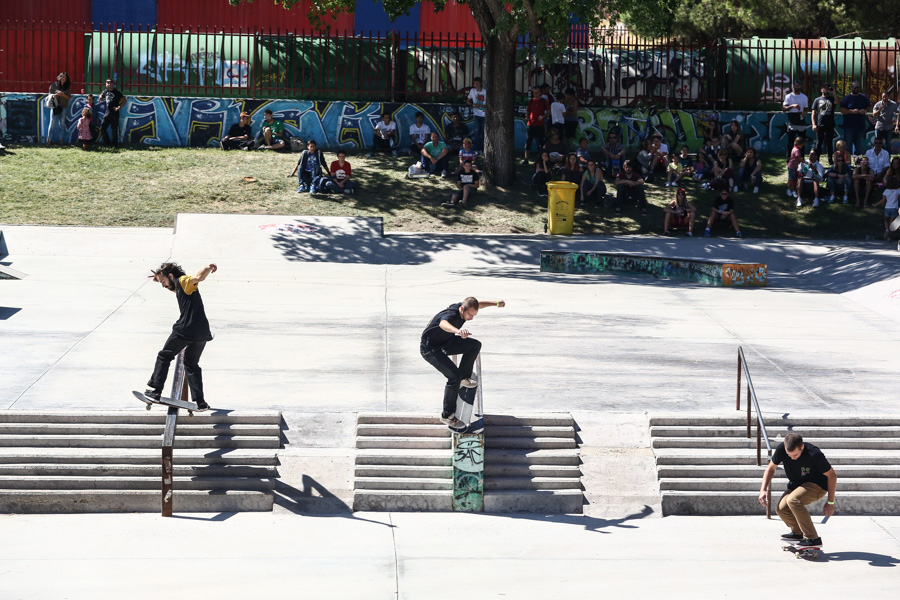 So, you just won the Shop Riot !!! You have a great team, did you expect to win?

Well, NO! Ha ha ha! We just tried! When you do expect to win, you don’t win, you know how it is. We just skated and had fun. I jumped in ’cause Patrick got hurt yesterday on a bs noseblunt, so I was like, “Ok, fuck, I have to go! And we got lucky. The guys are great, so that’s it.

What do you think about the contest format?

Hmmm, I don’t skate contests anymore, and this is one of the only contests I skated in over the last few years, and it was kind of fun. I love to skate with these guys. You know, I’m just the team manager, so it’s pretty fun for me. And if it’s fun, I like it, ha ha ha.

So, now you have to party with the money you just won! Or will you pay for the riders?

Only the guys get paid, I don’t know what they’re gonna do with the money. For sure Farid is gonna have a great time in Barcelona, ha ha ha.

Have a good time! You’ve earned it! 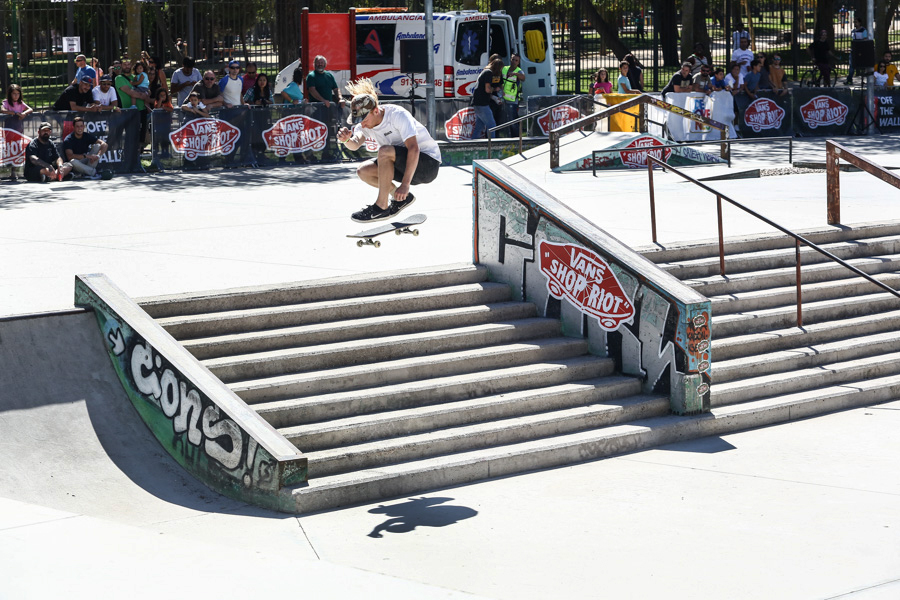 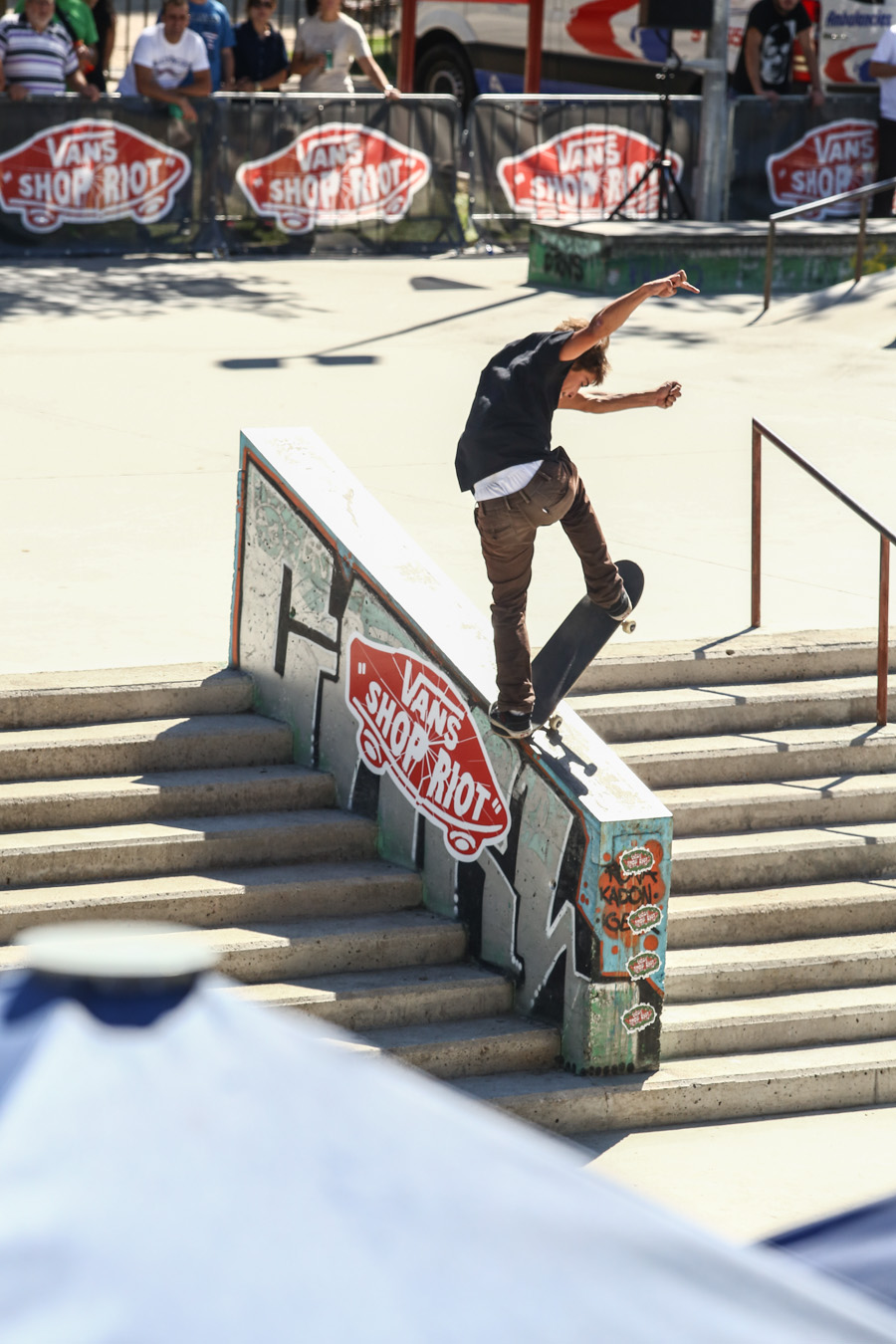 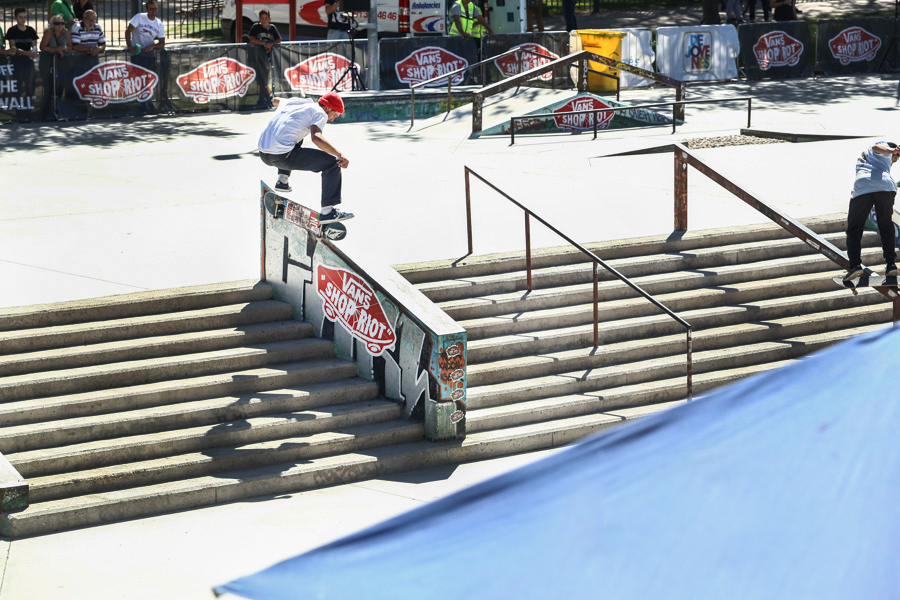 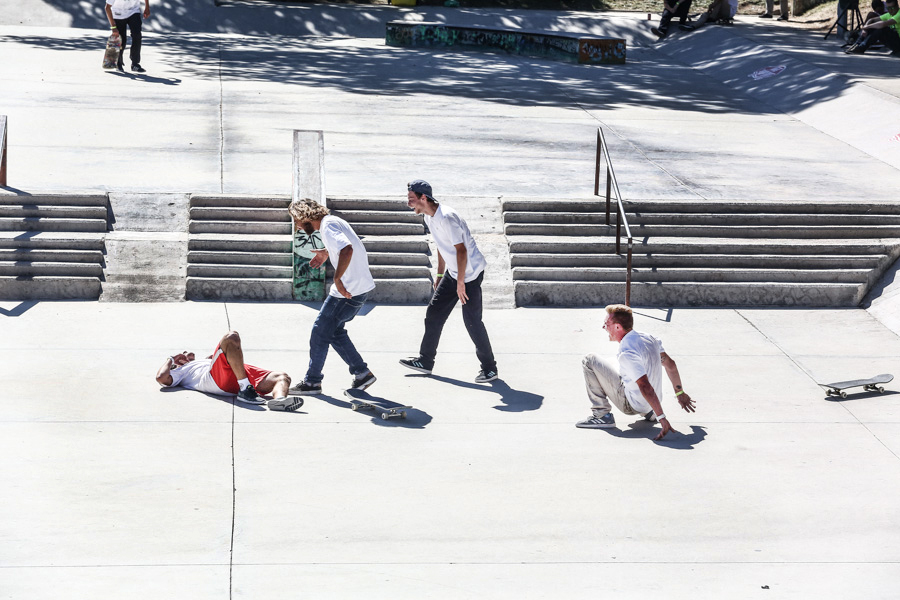