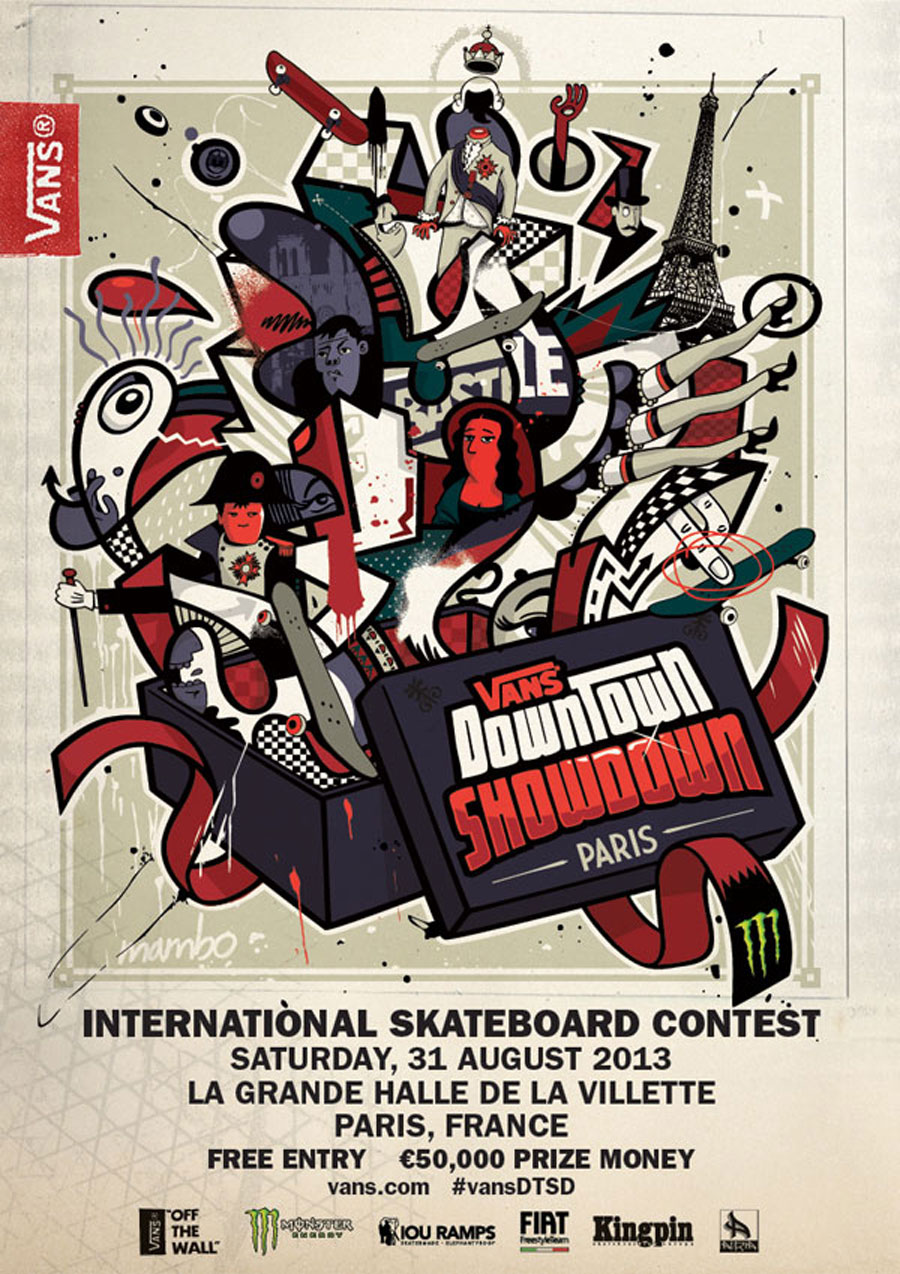 With just seven weeks to go before the crème de la crème of the Global skateboard community descend upon Paris, the Eiffel Tower is being polished and the Grande Halle de la Villette transformed in preparation for the arrival of the infamous Vans Downtown Showdown. As a city renowned for its iconic sites, as a home to poets, fashionistas, hunchbacks and artists, Paris sets the perfect scene for an event of epic proportions, and plenty of inspiration for the Vans Downtown Showdown as it celebrates its 5th anniversary.  Expect anything and everything, from live art and creative workshops, to a pop-up barbershop and an awesome public skatepark featuring reimagined Parisian icons, that whilst strangely familiar, will surely have never been skated before. The motto shared by both skateboarders and the nation’s boulangers, “no pain, no gain” rings true for the Vans Downtown Showdown, as 12 teams go tête a tête on a truly unique course, designed by themselves, and set to put their skills and creativity to the test.  The European front will be upheld by teams such as Element, Palace, Sweet and Death, whilst from the USA come Flip and Dwindle, and we welcome the suitably morbid Dropdead team from Brazil.  You’ll find a full list of teams and riders at the end of this announcement.  Amongst the invited teams, legends such as Steve ‘Cab’ Caballero, Tony Alva and Christian Hosoi will be present, and with a line-up like this, it’s an event Dame well Notre be missed. In keeping with the city’s past, art plays a prominent role in this year’s Vans Downtown Showdown.  Former Paris resident and graphic artist Mambo not only designed the event artwork, but will be joining other internationally respected artists such as Rich Jacobs, Kev Grey, Nicolas Thomas, Jay Howell and French, amongst others, as they apply their signature style to the iconic Vans “Off The Wall” logo in a show of style and creativity, and in celebration of Vans’ 47 years of skateboarding and street culture.  A full list of artists can be found attached to this email, along with their biographies. Elsewhere, Lovenskate will be hosting a creative workshop, where kids of all ages can try their hand at screen-printing, or even lean how to customize their own Vans!  Inspiration can be drawn directly from the archives, as a display of original product from Vans’ “Off The Wall’ heritage will be on display. In addition, we’ll be showing our support for the next generation of skateboard photographers in an exhibition curated especially for the Vans Downtown Showdown by Vans skater and bona fide Frenchman, Sam Partaix. Having spent the months prior to the event touring his great nation with little but a giant Half Cab and a select team of skaters, Monsieur Partaix set about meeting some of tomorrow’s stars of skateboard photography, as they set about documenting the teams antics on our giant skateable Half Cab.  The fruits of their labour will be on display at La Grande Halle de la Villette throughout the event. With the live art beginning whilst the skaters warm up and get used to the course on Friday, followed by a full bill of skating, creativity and music on Saturday, Paris’ Vans Downtown Showdown is set to be a Trihomphe.