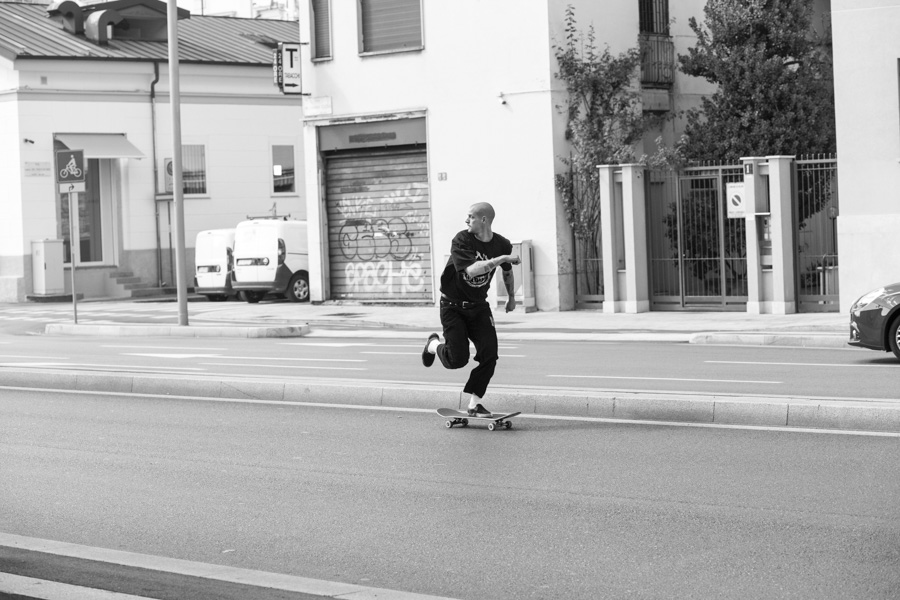 Hi Val, how was this trip to Milano?

Short! Ha ha! At first it didn’t seem like there were a lot of spots, but in the end we skated really good stuff and I’m very happy about how the trip went. The crew was cool, the vibe was positive, and every time you are in Italy the food is a big part of the trip. When you sleep and eat well, things are way easier, it’s part of the recipe.

You’ve travelled a lot lately, where have you been?

I was in San Francisco right before this trip, before that I was in Vienna filming for the Vans Europe video we are working on. Before that I went to Russia, last summer. I went to Taipei with Levi’s. I’ve been to Asia four times already, to Japan and China. Taiwan was really different from China, I found more similarities with Japan, everything is super clean and is good to visit. You definitely feel like a stranger there, but I love the feeling of being a bit lost, the feeling of being in the “bubble” of a skateboard trip. 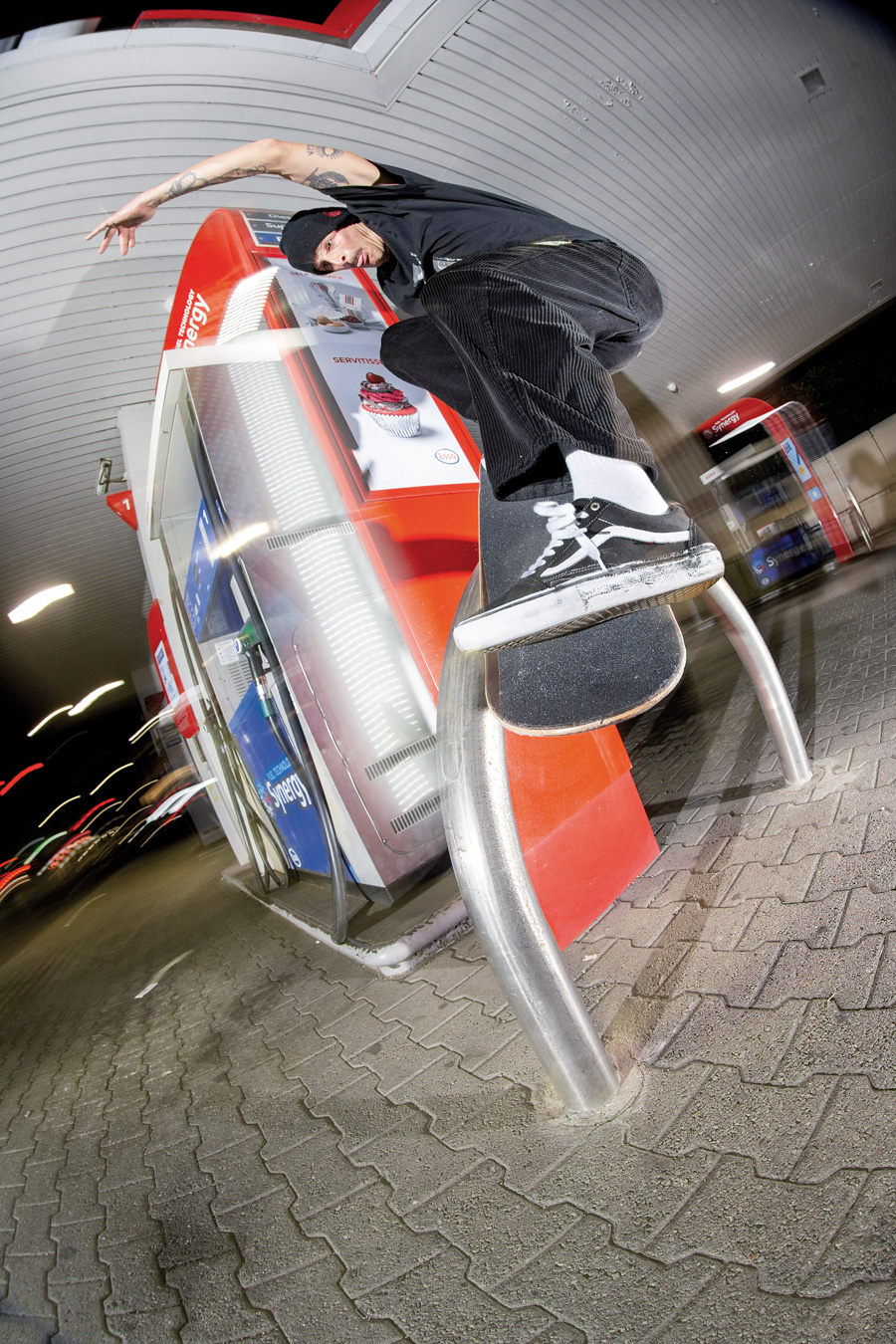 Do you have a favorite trip?

Every trip is special, I can’t really tell whether I have a favorite city to go to, every tour is different, and your memories depend on how the mission went, if you were happy with your skating… it’s not only about the place you visit. Every trip is my favorite, it’s also important to remember how lucky I am to be travelling to skate, I could be working in an office instead. What I want to do is travel to skate so I cannot complain, I’m in a lucky position.

You live in Paris, but you’re not originally from there, right?

I’m from Lille, which is a cool place to grow up in, it’s a student city, but if you skate when you are in your 20s you want to see more, and want to live in a bigger city where things move faster. Paris has the biggest skate scene in France and I couldn’t see myself living anywhere but Paris at the moment, also because I have my girlfriend there of course, and also a really, really solid crew of friends. We skate together every day, two close friends of the crew are filming skating and others are photographers; that makes things way easier to get some stuff done. When I’m at home, when I’m not on trips, I want to be out to get something almost every day, otherwise I’m not happy. My happiness really depends on this, or at least 50% of it. I need to get some stuff done, to be happy with my skating, to be happy with my mind. That’s what I’m living for, otherwise I should be doing something else. 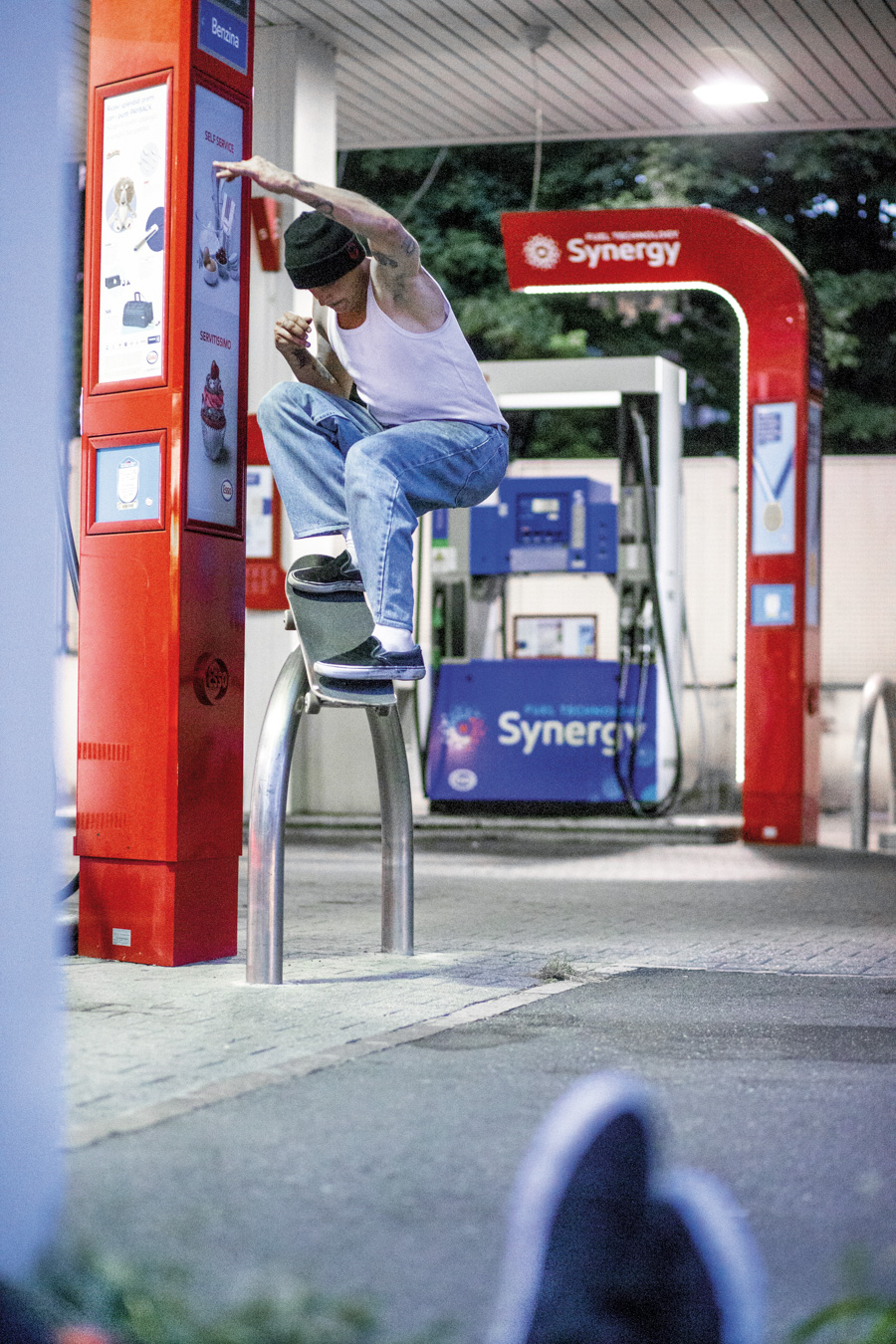 I see you very motivated, something that is not always obvious among skateboarders.

I consider myself lucky to be in this position, and I try to do my best first for myself and also for the people that support me. You cannot be motivated all the time, you know there are ups and downs, it’s a circle, but I try to make the most of it, also because you have to remember that it won’t last forever. And if you keep getting stuff done there are more chances that it’s gonna last a bit longer. I want it to last as long as possible.

How old are you now? 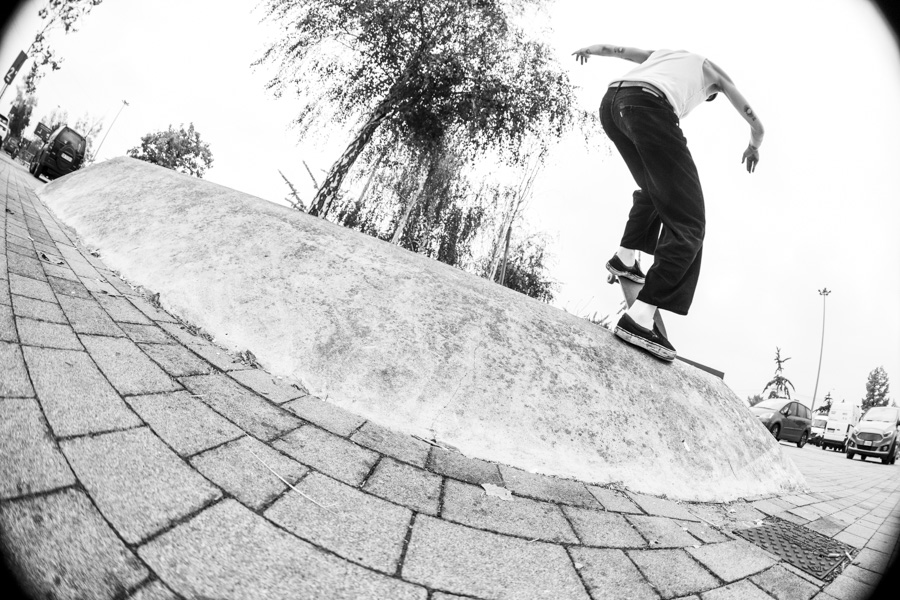 Paris has an amazingly solid scene at the moment.

Barcelona had a crazy good shine years ago that lasted a really long time, I felt like Berlin had a really good shine after that, and people started going there a lot during the summer; Paris just had that shine for like three or four years also because of this Plaza (Republique). They took down one of the main roundabouts in the city and made a crazy big square which is a really good skate spot, it’s in the heart of the city so it’s a really good meeting point, there are a lot of people skating there. With Instagram everything goes so quickly, everybody wants to go because of these clips of Paris. It’s cool but at the same time the city is kind of blown up, the spots, so it makes it a little bit harder for us to find new spots, but we have more time to live there and explore 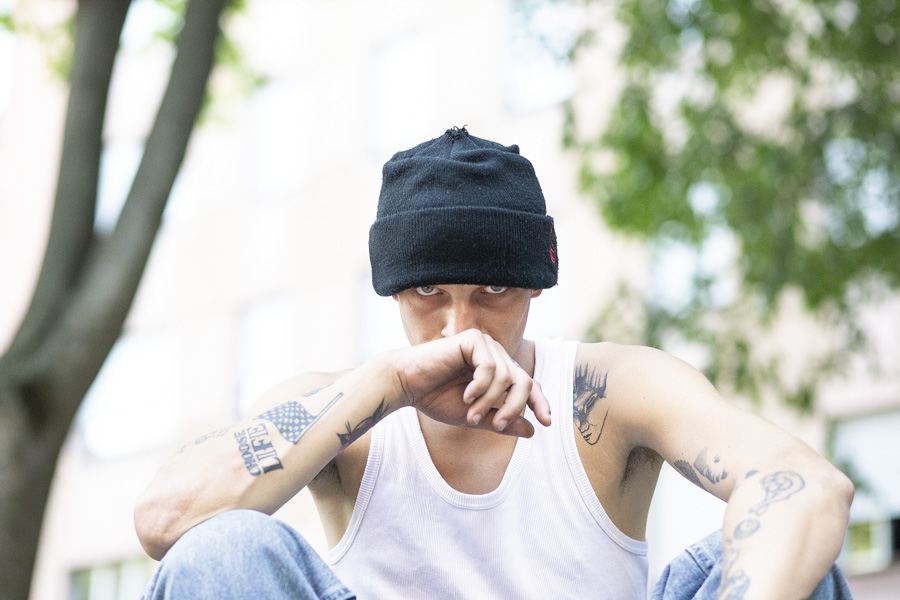 Yes, it’s a good crew, there is also a kind of healthy competition going, because everybody wants to do more, there is a good energy coming out of this, everybody does cool stuff and you want to do more. That’s pretty cool, everybody pushes each other in a way. 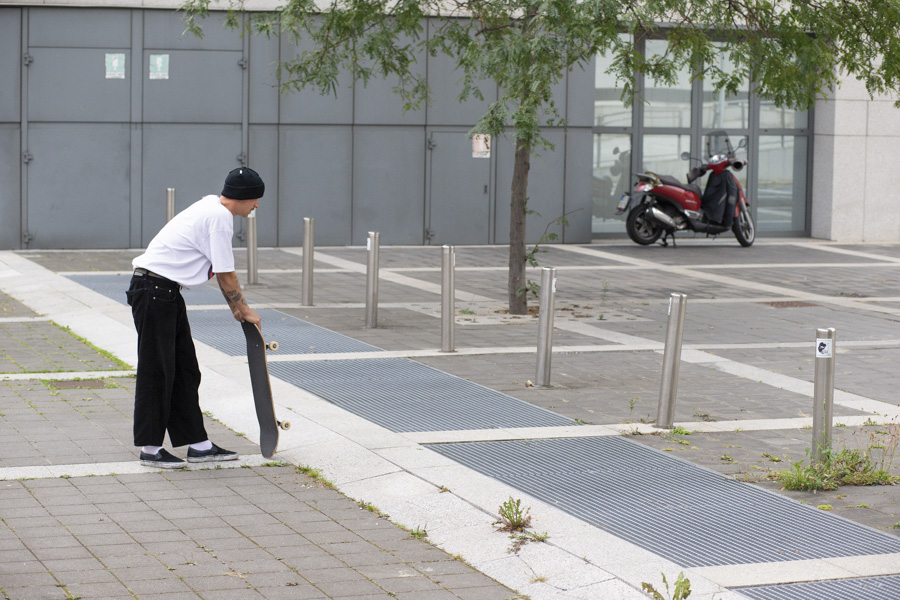 Yes, the right pronunciation is “rassvet” which means “sunrise.” I started skating for them maybe 2 years and a half ago. I met Tolia in Berlin at the skate awards and we stayed in touch, we had common interests, clothes, music, skating, visions, we became friends and it went like this. It’s a young company that’s still growing, they also do clothing and we can submit ideas, also for the board graphics. That’s kind of cool. It’s cool to be part of a small company that’s also supported by a big company such as Comme des Garçons, that gives you the means to do cool things you want to do. I feel in the right place.

I’ve seen that you are into music a lot, you had old Italian music playing in your speaker at the spot the other day, was it for the trip?

No no, I have these songs in my playlist, I got a lot of Italian music from Jacopo, I like different kinds of music, I like playing and listening, also on skate trips at a spot while trying a trick or chilling, I love to have some music playing to keep the mood positive. 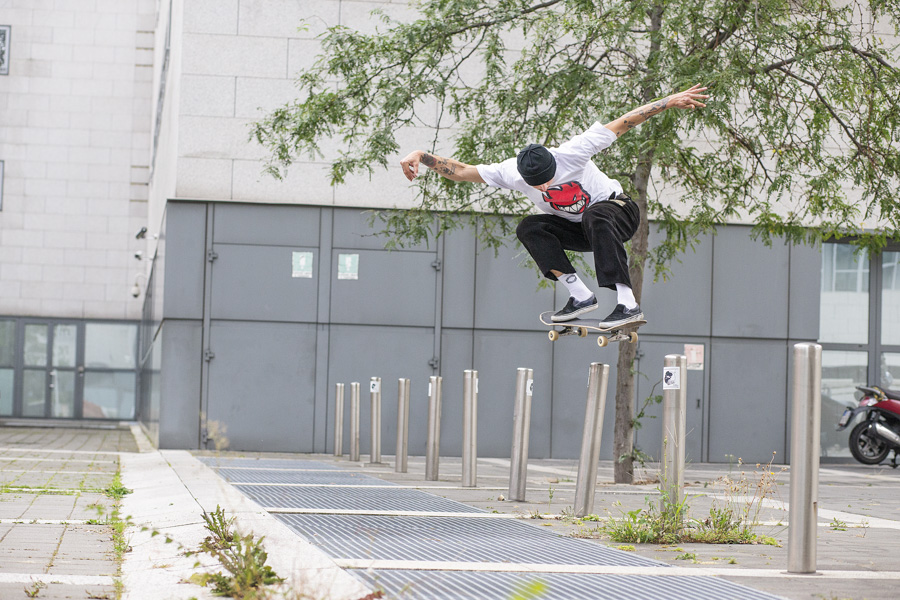 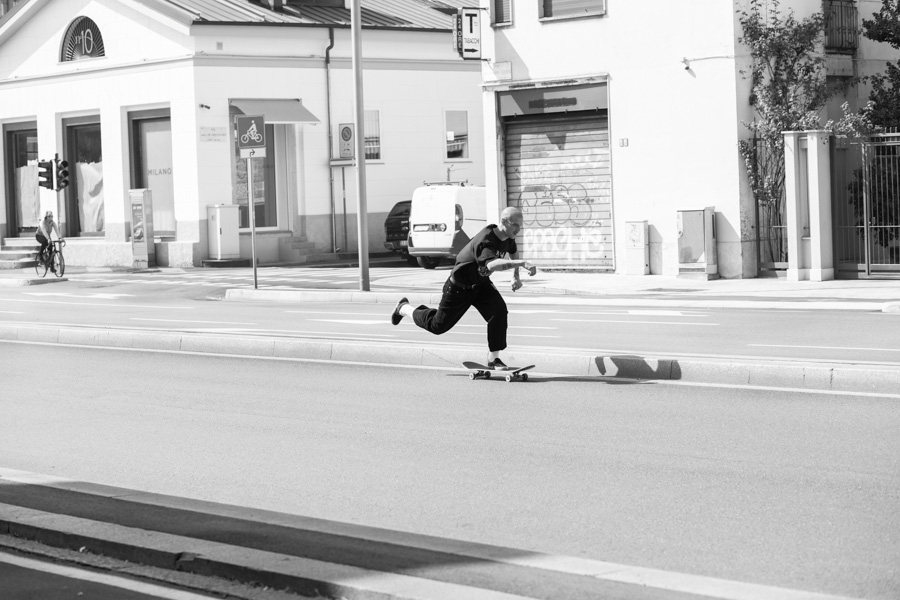 You’re into tattoos a lot too…

My friend Eduard De Paz started tattooing and I pushed him into it because he is good at drawing, so he started… I see it this way; if it’s raining or whatever it’s kind of the same dopamine you have when you’re skating, you get something done. I’m a really intense person, I need to go really high to be happy, get this dopamine shot, I don’t do drugs. It’s like getting a fresh box from your sponsor… I’m that kind of guy, I need these dopamine shots to be happy. I like the fact that most of my tattoos are made by my friends, Tolia, Edward… they give me good memories.

I’m filming for this Vans video, the deadline should be next February, so we’ll be on some trips for sure; then we are filming for a little clip for PACCBET in Paris. We are also filming with Roman for an independent project, then we should go to Argentina with Levi’s and we are supposed to go to Japan with Octagon in November. A couple of things cooking. 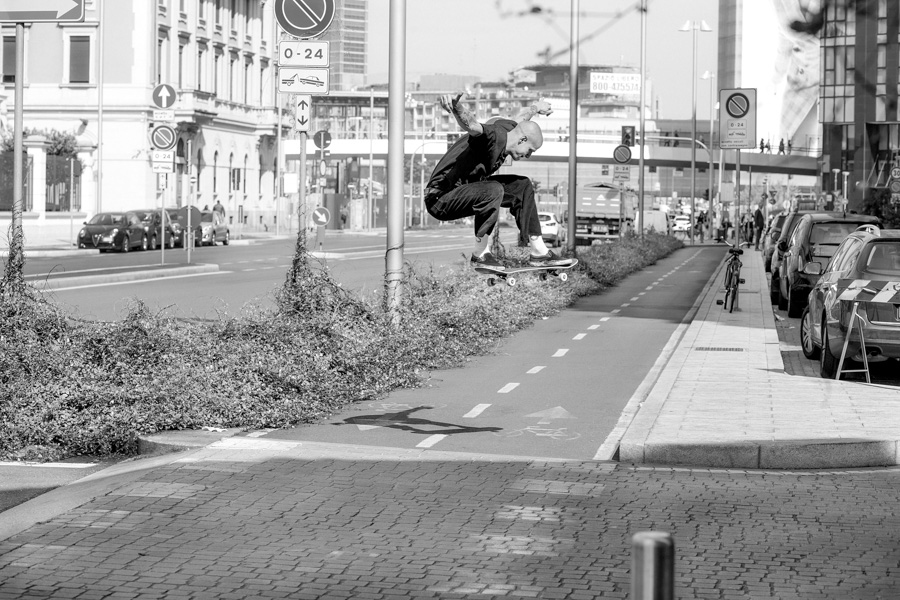 Ollie off the kicker to the sidewalk.