Luca Crestani is one of the most productive skateboarders around.

a brief glance has the pleasure to present you his new video part filmed and edited by Marcello Guardigli.

Crest is the best. 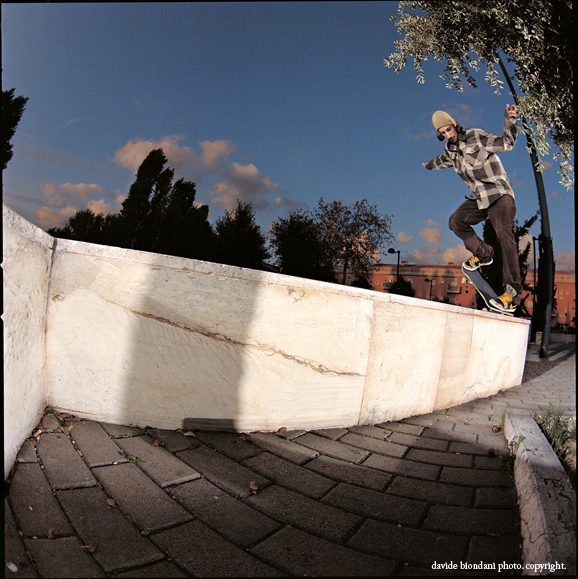 Hey Luca, how are you doing and what are you up to these days?

All good over here, getting my bag ready to leave…a week in Madrid with Chiara. A little vacation before the spring season starts, you know!

Your new videopart just got put online here on abg, are you happy on how it turned out?

Yes I am, I’m hyped on it! After a long time we finally finished this part, a project that was taking too long finally is out!

What’s up with the intro? Did your twins brothers dressed like you or is it a special effect? 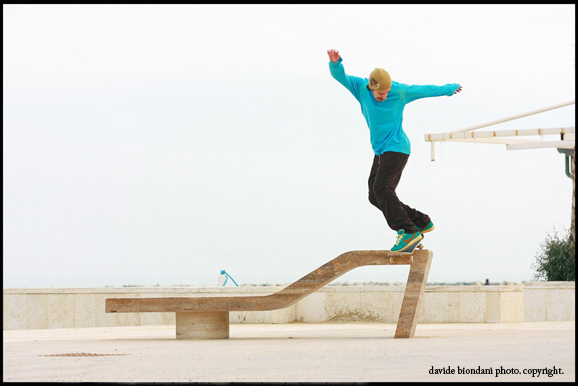 Ollie up to bs lip.

What’s your favorite trick in this part? I think the ollie up to wallie to fs tail on the ledge is really cool.

I agree with you! I really like that one too! I’m also stoked on the ollie transfer bank to bank at that famous spot of Lampugnano in Milano… I like this one because the rough landing is killer; it’s made by red rough bricks, and also because I used the spot in a different way than everyone else. Originality is always the best part!

Overall the tricks I think though the hardest one was the tre flip off the bump over the fire hydrant; it doesn’t make sense, basically there is not bump, the flat is crazy rough and the fire hydrant is really far… still today I keep asking myself how the hell did you land that trick! Is it the trick you had the hardest time on to land it?

Yeah I think so! I had to go there twice to film it and both times it was a really hard session.

How long did it take you to film this part? Am I wrong or a few clips are at least 3 years old?

Yeah this project took a while to get done, we started to film for it about 3 years ago but then Nello moved away to Australia so it kind of slowed it down, so we decided to use other filmer’s footage and put it all together. A few clips are old but I still happy about this part!

A few clips are filmed during a Nike SB Europe tour in Sicily and a Blueprint tour in Milano; who filmed those tricks?

In both tours the filmer was Dan Magee.I appreciate his work and his help even because I really wanted to use those clips. His footage gave more value to the part. Thanks homie!

Are you already working on something else?

For sure! It’s going to be a crazy year for me. I got a lot of project I’m working on: first of all a small part for Burn energy drink, going online by summer time, 3 Nike SB tours here in Italy with video and photos here on a brief glance skateboarmag, a Quiksilver tour in september in north Spain and by the end of the summer my next full interview will go out with a new video part filmed by Andrea Zolin. 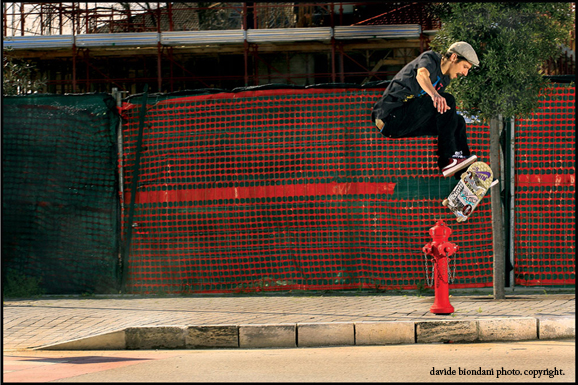 Tre flip off the bump and over the hydrant !!!

I heard as team manager you made some changes inside the new Nike SB Italy team… who is on right now?

Let’s say I had the good opportunity to help Nike SB about the team because we needed less riders in order to help them out in a better way. Now the new team is composed by Marco Lambertucci, Jacopo Carozzi, Luca Doneddu, myself and Mauro Caruso. I have to say it was a really hard decision this one because of all the old riders that first of all are my close friends, there is a really good friendship between us and I have great memories being with them on tours that I will never forget.

Definitely a really good team, I would say…

Yes, I’m really happy about this team, all young guys, always ready to skate and really productive all the times. I’m pretty sure this one it’s going to be a sick year for all of us.

Alright, that’s it Luca, enjoy your holiday and see you soon!

Yes Dave! thanks for this interview. Later.