[RoyalSlider Error] Incorrect royalslider ID in gallery shortcode (or in Global, or problem with query.

Kyle Walker has his first pro model shoe out for Vans today. We had a conversation with him a few days ago in Berlin about his new shoes, about realizing your own dreams and about how stay motivated and film four sick video parts in a few years. (click on the image above for full screen photo gallery). 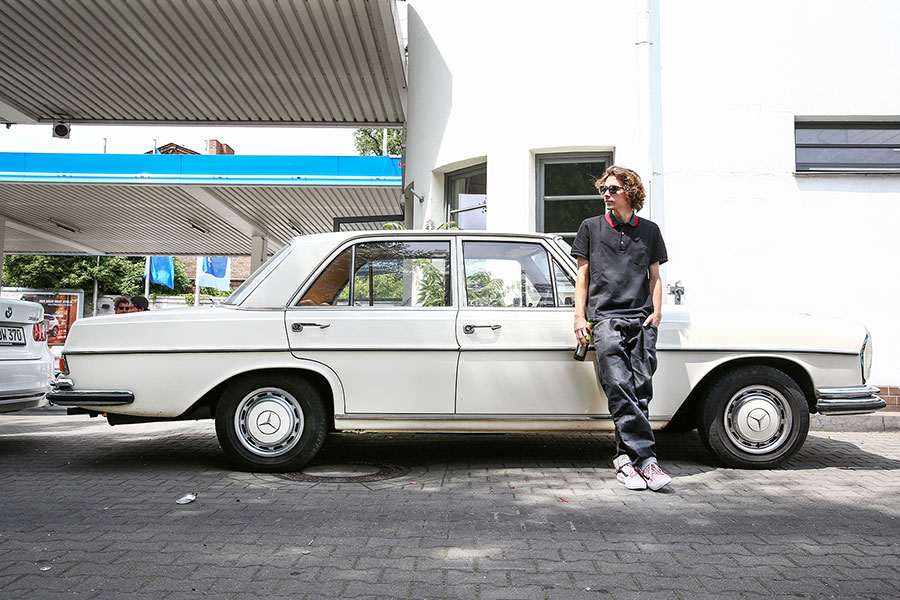 Hi Kyle, so you have your first pro model shoe out for Vans, how do you feel about it?
It’s a great feeling for sure. I’m very thankful, Vans is like a family, they treat people very well, there are a lot of good people working there so… I couldn’t be any happier honestly. I had a couple of colorways before, but this is my first real “pro-model.

”  What did your parents say when you showed them the shoe with your name on it for the first time?
Oh shit… my mom started crying immediately, ha ha. They allowed me to go to California by myself when I was 16 years old, now I’m 22, if I think about that now I’m like, “You were crazy to let me go, ha ha ha.” The fact that they trusted me… but it worked out… so yes, I couldn’t be more thankful.

How was your first time in California at 16 years old?
Actually, that wasn’t the first time when I moved there, I was always going to Cali, I had some friends down there. Living in Cali was awesome, everything was new, it was you and your friends skating, no rules…

Looking back at the time when you were following your dream… and now that the dream has come true… and you are wearing it…how do you feel?
(While looking at the shoes) Honestly, it still doesn’t feel real… I’ve been working on the shoe for like one year and a half, and working on and on till the final final production… it doesn’t feel real. I think once the shoe drops and I start seeing people wearing them or see photos, or see them in the skateshops… then I’ll realize better that it’s all real, ha ha ha. It’s a good feeling. 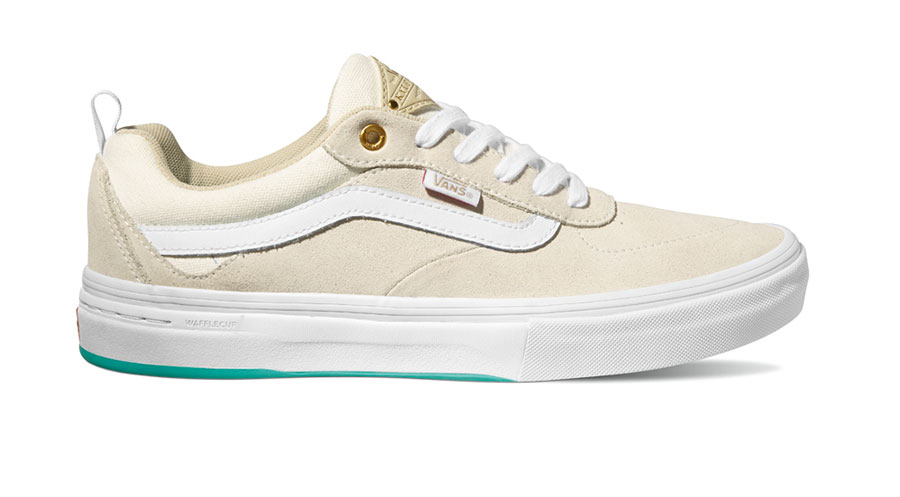 How involved were you in the process with the Vans design team?
I pretty much did everything, I worked with the design team and I tried to do it how I wanted it to be, if people like it they like it, if they don’t they don’t.  What was important to you?

I really wanted some stitches on the back, the new cupsole, called Waffle Cupsole, the cupsole on the back and the vulc in the front, so as soon as you step on your board with the brand new shoe you can skate it straight out of the box.  You are originally from Oklahoma like Peter Ramondetta and Ernie Torres… how was living there?
There is really not much going on in Oklahoma but everybody there is so genuine, the food is good, good people, everyone opens their doors for you… I have been living in Cali for 8 years, but I love where I’m from. I haven’t been back since Christmas, but I try to go when I can.

How did you get on Real Skateboards?
I was skating at this contest, I was flow for Zero, and the Deluxe TM at the time asked me if I wanted to skate for Spitfire Wheels and Thunder Trucks, and a month later he was like, “Hey, you want to ride for Real?” I had no hesitation. Real has always been my favorite company. 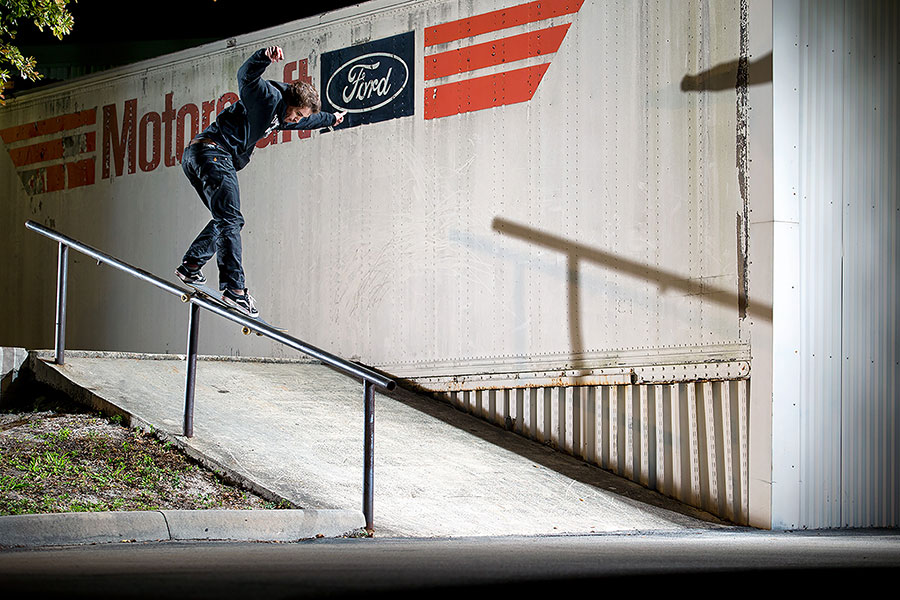 You are very close friends with Na-Kel Smith…
Yes, definitely, he is one of the realest people out there I’ve ever met, he’s a good human. I would say he’s one of my best friends, I skate with him a lot back home. He’s amazing, his part in Away Days is amazing… you’d see him dancing and singing when he was younger.

It seems you are very productive, you had full parts in the Real video Since Day One, then in Volcom’s Chicago Colors video, then in Vans’ Propeller, and now again in the Volcom video! How can you stay so focused and motivated to put out so many amazing and innovative video parts? What’s your secret?
Obviously, sometimes it’s gonna get hard and you gonna be over it; but then again you think about why you started skating, so you keep it fun, and what comes to my mind first is like… I would rather do what I love and not complain, and I don’t wanna work 9 to 5… so you do what you do, you have to think positively for sure. The traveling part does get pretty hectic sometimes, but what can you do, you can’t complain.

When you film a video part do you already know what you want to do, the kind of spots you want to skate… or do you go with the flow and see what happens?
With Vans and Volcom you travel a lot… they don’t want to stay in the US so they take the team to Europe and around the world, so you meet new people, skate new spots, and have new motivation all the time. And when you travel with good people everything is more fun. That’s important.

How was filming with Greg Hunt for Propeller?
When you’ve watched all the sick videos Greg has made over the years thousands of times… before starting the project I was like, “Oh, this is gonna be crazy,” but he’s actually so mellow, a great human. Propeller was the funnest video by far, Volcom was cool too, but had a different vibe for sure. Propeller was real, raw skating. Different filming style.

What’s next for you?
I’ll be on tour with Vans from Chicago to Baltimore soon, I don’t really skate contests but this year I’ve been invited to the Street League and Dew Tour. I’ll keep filming too… there is a Vans video coming out next November I think. Then a Real video is coming out in July, something like a 20 or 30-minute video. Then just stay busy, same shit different day, ha ha.

Thanks a lot Kyle, I can’t wait to skate your shoe. Let’s go for a cold beer now.
Let’s go. Thank you. 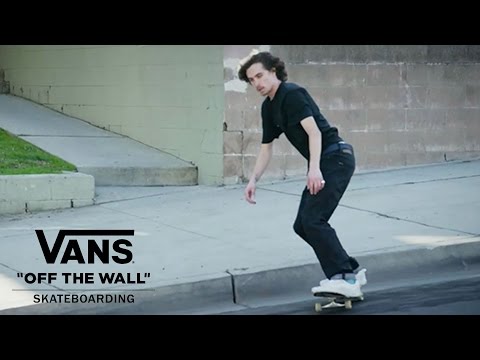 The Kyle Walker Pro will be available at vans.eu from July_9.