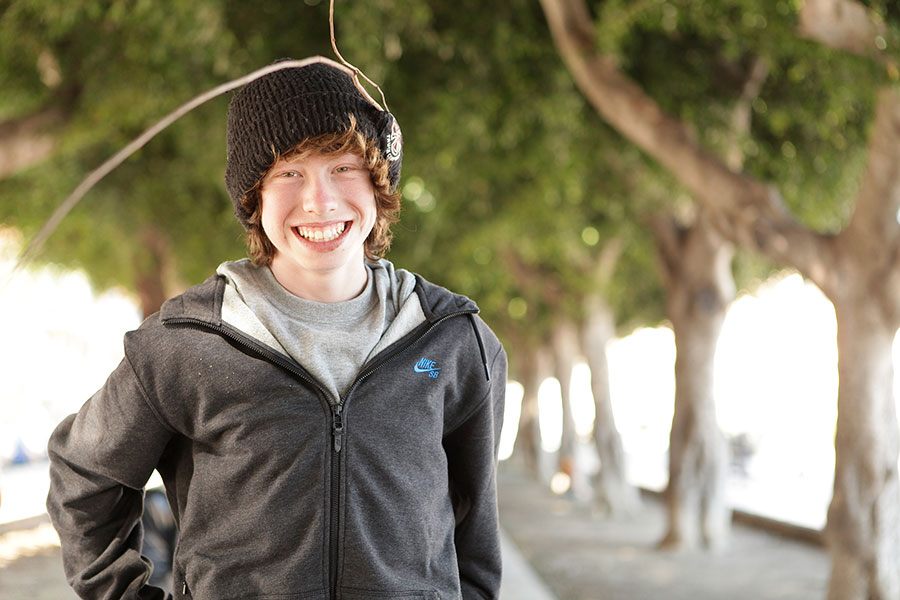 Jacopo Carozzi spent the last years on the road skating and filming, in 2016 he had solid parts in the Element “New World” video and in different Thrasher’s edits. Last week in Berlin he received the European Rookie Of The Year Award. On the stage he performed a perfect somersault before to get the trophy. That perfectly framed the way Jacopo is and face things.  Everybody loves Jacopo! We had a little chat with him the day after the event.

Did you have to exercise to do the somersault at the European Skateboard Awards in Berlin?
The somersault was improvised. I didn’t exercise physically for it, but mentally!

As the Italian tradition calls for, did you get a wedgie after the award? Can you tell us something about wedgies?
The wedgie is how we celebrate victories in Italy! Whoever you are, if you come to Italy and you win, you get a wedgie, which basically means you return home with your balls hanging out!

Did you expect to win?
No, I didn’t expect to win, also because I was hoping Kyron would win, because he really deserves it! Obviously, I had a 25% chance of winning.

Over the last few years you’ve been traveling a lot. Of all the trips you’ve been on, which one did you enjoy the most?
Yeah, I’ve been on so many trips, and the more time passes, the more I realize how lucky I am and how many different countries I’ve already visited! The trip that psyched me the most was this past summer in the US with P Stone! We got to Seattle and from there I lost track of time and space, basically I knew I was in the US but most of the time I didn’t know exactly where! The fact that we didn’t sleep in a bed for about a month and ate all kinds of animals was the best part of the tour! Pretty much the survival tour!

Tell us about some adventures with P Stone, how did you organize the missions?
As I told you, the tours with P Stone are my favorite ones, we skated and partied, there was no pressure, just pure fun! P Stone is the best!

You’re probably used to it by now, but you’re on Thrasher pretty often! Ha ha ha!
Thanks P Stone.

If you could choose a group of people to go on a trip with, who would you choose and how/where would the mission be?
I would definitely want the crew I usually go around with, P Stone, Nando (Fernando Bramsmark), Osky, and Bobby who is my homie. I would go back to the US to get lost again!

As Rookie Of The Year are you going to have to dress better?
AHAHAHAHA Absolutely not! To be honest, the last thing I worry about is what other people think!!

Now that you’re the “European Rookie Of The Year,” do you feel the pressure? And do you think that you could be pro someday?
I don’t think it changes anything. You can’t buy these kinds of satisfactions! I never really wanted to turn pro! They’re just things that happen without you really realizing it, and it just means you’re having too much fun on that little piece of wood! I’ve achieved my goal, which is to live this lifestyle! That’s all I ask for!

What do you think was the best moment of the awards?
The whole event in general, it was an excuse to meet everybody and drink some prosecco!

Who did you want to win?
I would have given the Skater Of The Year award to three people, Daan, Jarne, and Phil! They all kicked ass this year!

Who do you think are some up and comers in European skateboarding right now?
I can’t really answer this question, people come and go! It all depends on how much fun you have!

Tell us about Stinky Trouble and the video series you’re doing.
Stinky Fuckin’ Trouble is our crew, nothing much, it’s just a way to let everyone know that people are skating in Italy and not just eating pasta! Our videos kind of recall the 80s, the years when I would have liked to be born in order to see the evolution of all the scenes! It all began on the trip to Australia, in 2015 I think, when Bobby and I were homeless because we chose to be, an experience that changed my life and made me understand that you don’t need anything except for friends and common values! One day we were in Nimbin, an Australian town near the mountains where hippies get together and weed is legal… Not having a place to sleep, we tried sneaking into this hotel in the middle of nowhere, pretending to have a reservation. We dumped our suitcases in the woods and nonchalantly sat down on the couches outside!!! We were there for a good half-hour until the hotel staff started chatting with us! Then we took our shoes off and as you know, after a whole day skating in 30°C Australian heat, everybody began to notice the stench emanating from our feet… and they began complaining! That’s when the lady from the hotel asked us the big question, “Who are you? How long are you here for?” Our answer was not too convincing! That’s when Bobby and I looked at each other, and while the lady was calling the cops, we slowly put our shoes back on, grabbed our hidden suitcases and got out of there! That’s how Stinky Trouble began!