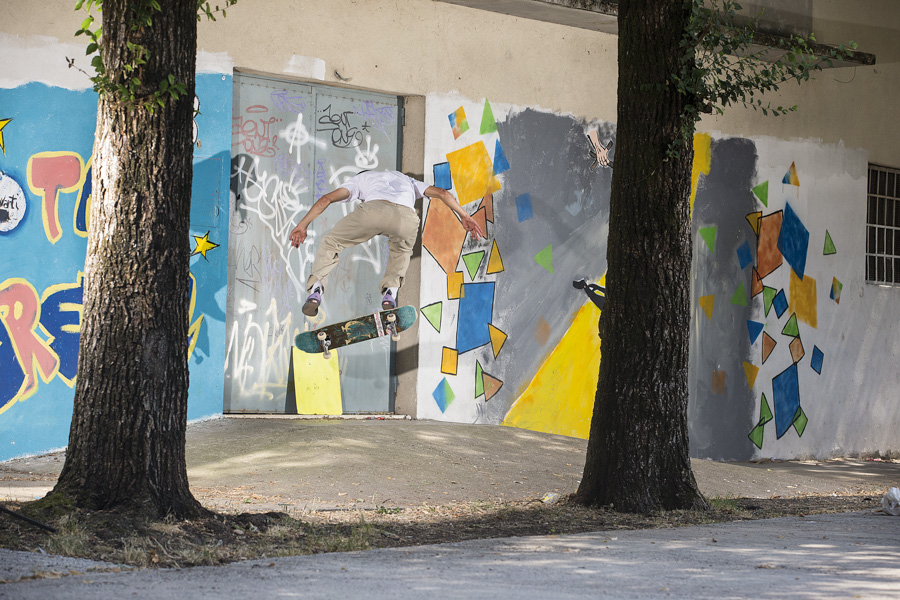 I’m doing good, I just got up and I’m getting ready for work.

Did you party last night?

Uhm, no no, I’m not a such a big party person, although it might seem so, but I’m not. I probably party like once a year, maybe?

In what year were you born?

How long have you been skating?

For about seven years.

How did you start skating?

When I was a kid, in Veneto where I used to live, my parents would give me skateboards as presents and I would take them apart and use them as snowboards because I lived in the mountains and there was lots of snow. Then, when we moved to Bolzano, my mom saw that there was a new skate park and asked me if I wanted to try skating there, so that’s how I began.

So you have not always lived in Bolzano?

No, I used to live in a small town up in the mountains in the province of Vicenza called Crespador. I would always come to Bolzano on vacation with my family because we had a friend here, then my sister was looking for a private high school and there was one here in Bolzano. Then my parents found an organic food shop to buy – that’s what my mom does – so everything just fell into place and we moved to Bolzano. 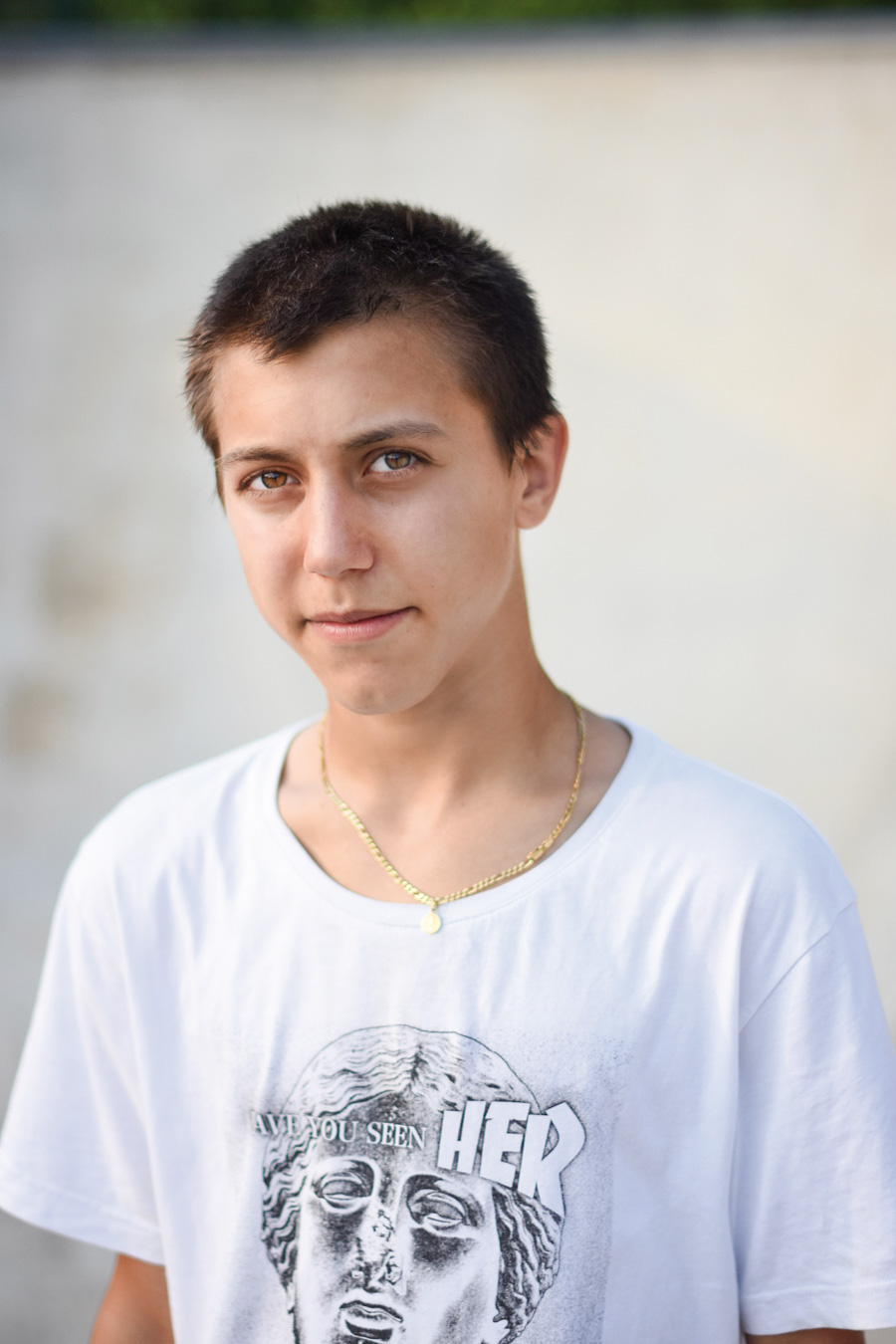 They speak both German and Italian in Bolzano, so you had to learn German too…

Yes, I can speak German more or less, but I only speak Italian with my friends. I speak German when I really have to, I don’t like it that much.

What’s the best thing about living there, and the worst?

Who was your favorite skater when you started skating?

Daewon Song, he still is, I don’t know how he can do all those manuals, he skates everything, he skates the strangest things. I really like him, but generally I like to skate in a simple way. Basic tricks, like a very long backside tailslide for example, rather than an incredibly technical trick.

I swear, the skater I love to watch the most now is Jacopo Carozzi. I love him. But I’ve always loved watching Paul Rodriguez, the whole Primitive team too. I like Kader a lot.

What else do you do besides skating?

I go to school, I flunked and now I’m doing two years in one. Then I’ll attend a hotel management school. My second passion is cooking, I always cook by myself at home. My parents are both vegan, so I always cook lots of different things, I love making sauces for pasta, or cooking fish.

You were saying that you worked all summer long at a restaurant in the center, what’s it like to work and skate? 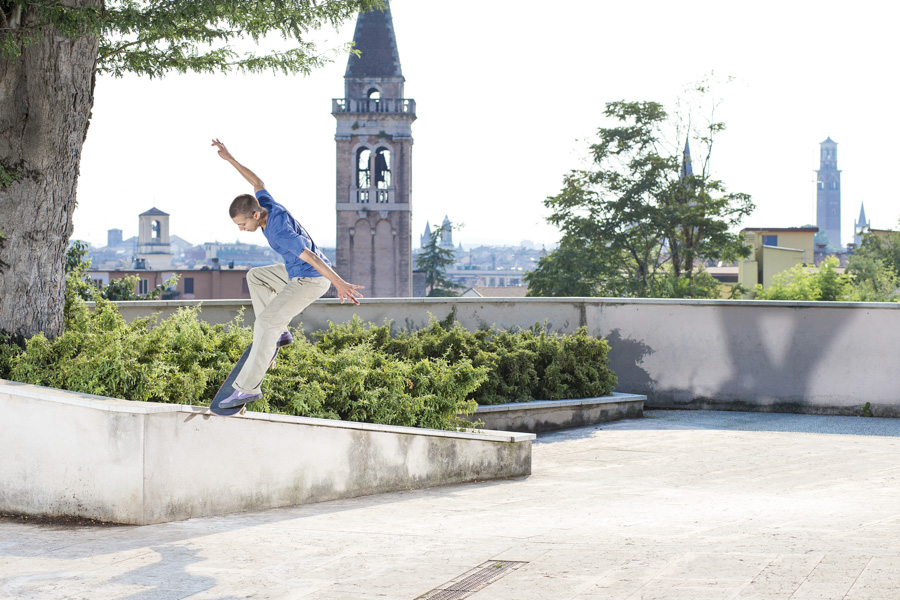 Why did you choose this name?

When I used to skate at the park from 9AM to 9PM I used to eat lots of junk food, lots of sweets, so Benjamin, one of the boys there, gave me the nickname lil_sugarzz. He basically made it up himself.

What’s your relationship to social networks?

I don’t use smart phones that much, I’ll check my socials every now and then, if I get interesting messages I’ll answer. I look at Insta and Netflix from home, when I’m relaxed, but I don’t spend much time on social networks.

Do you ever think it’s insane that everybody always has their phone in their hands?

Oh yes, often, it’s kinda sad too. When I lived in Veneto I had nothing, only a tape recorder, and I would watch the same things over and over, like the “Lion King.” When we moved I got a couple of phones that I’d get nerdy with, then the Play Station with which I’d play Fortnite a lot. Then I realized how ridiculous it is to waste so much time at home getting mad. I don’t use it any longer. I’m pretty much against social networks, but I use them, I need them.

Insta clips are ok, you get to see new tricks and all that, but a full-length has got a different value, filmed on the street with your best tricks. They’re two different things.

Do you have any print mags at home?

No, I don’t follow videos and mags that much. I’m not too informed about skateboarding in general. I don’t always follow everything that comes out. I watch the things that come out from the skaters I like, when Boo Johnson’s part came out I was super hyped.

I know that Sub Shop and Vans support you, how did this come about?

With Sub Shop there’s a really nasty story behind it, ha ha ha. All my friends had sponsors so I wanted one too, so I went to Sub Shop and asked them what I needed to do to get sponsored. They told me to film a video at the park and bring it to them, so I did. By the way, it was a very ugly part, and they put me on the team, ha ha. For Vans, I was at the Italian Skateboard Championship and after the contest was over, Vans Italy’s team manager asked me if I wanted to be on the team.

Did you know everything there is behind skateboarding when you first began?

No way, absolutely not. You know, when I started skating I wore short pants and mountain shoes! It was terrible! Ha ha ha, I had no idea about anything, ha ha. 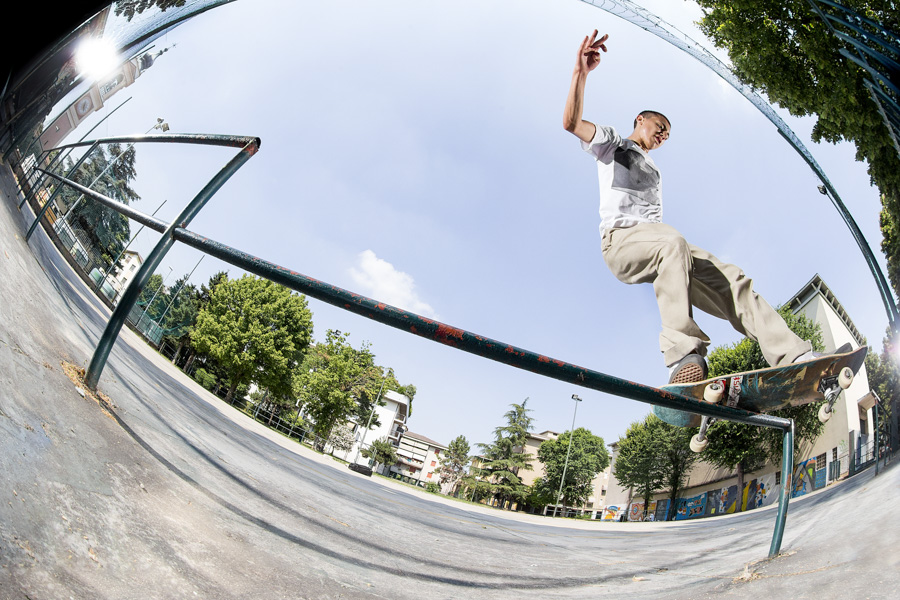 What’s the best thing about skateboarding?

The fact that everyone says hi even though they’ve never seen you before, even if you meet a famous pro. If you’re out skating you all skate together.

Have you picked up girls because of skating?

No, unfortunately not. Actually yes, I met a couple girls who wanted to try my board, ha ha.

Did you know that Maznee lost his virginity thanks to skateboarding? Ha ha.

Of course I know!!! We were skating in Berlin together, we partied a lot with the whole crew that night. The next morning he came home with a nice smile on his face, ha ha.

There is a super cool scene in Bolzano.

Yes, it’s awesome, there’s lots of skaters, they’re all motivated and happy, we skate together every day, you go to the park and everyone is there. 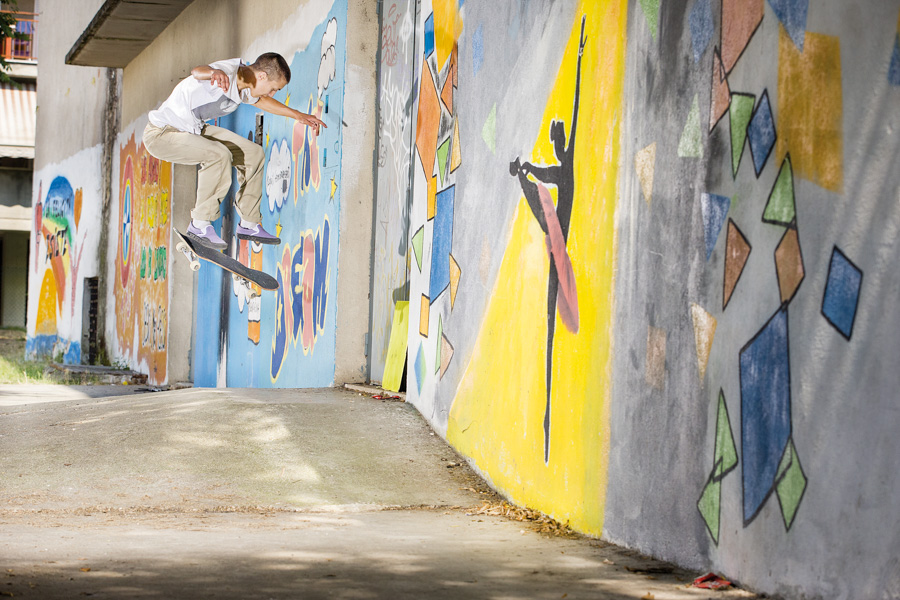 What do you think about skateboarding being in the Olympics?

It’s positive because it introduces skateboarding to a wider public and brings more money into skateboarding. But for how skateboarding was born, it’s not really that good, I don’t see skating that in tune with the Olympics, but it’s an opportunity and opportunities are important.

Do you have any other passions?

I love riding my racing bicycle, it was my father’s. I really like it a lot, I love it.