Our friend Claudio Majorana sent us this clip he filmed with Giuliano Severini for Enimol Skateboards.

Inspired by one of the trailers from “Stranger than Paradise” a low budget film realized in 1984; this not the typical “skateboard video edit”.

Below you will find an interview with Mr. Majorana about the filming and some backstage shots.

How did you came up with this idea?

At the end of summer 2010, after a tough university examination session I felt I needed to keep myself focused on something different than my routine issues. I thought it was time to make a commercial for Enimol Skateboards trying to do something different. Enimol it’s a new-born Italian skateboard company, I just got into the team and I’m pretty stoked about it. I got inspired from one of the trailers of  “Stranger than Paradise” by Jim Jarmush, a low budget kind of deadpan movie, released in 1984. Stranger than Paradise features a minimalist plot in which the main character, Willie, is asked by his aunt to give hospitality to her cousin Eva, form Hungary, for ten days, before she goes to Cleveland. The movie creates a sort of comic delivery where humor is presented without a change in emotion or body language, usually speaking in a casual, monotone, solemn, blunt, disgusted or matter-of-fact voice and expressing an unflappably calm, archly insincere or artificially grave demeanor.

At the time the movie received many awards and the critique written by Pauline Kael described it in this way “The joke here is the basic joke of the whole movie. It’s in what Willie doesn’t do: he doesn’t offer her food or drink or ask her any questions about life in Hungary or her trip; he doesn’t offer to show her the city, or even supply her with sheets for her bed. […] The film has something of the same bombed-out listlessness as Paul Morrissey’s 1970 Trash – it’s Trash without sex or transvestism. The images are so emptied out that Jarmusch makes you notice every tiny, grungy detail.” 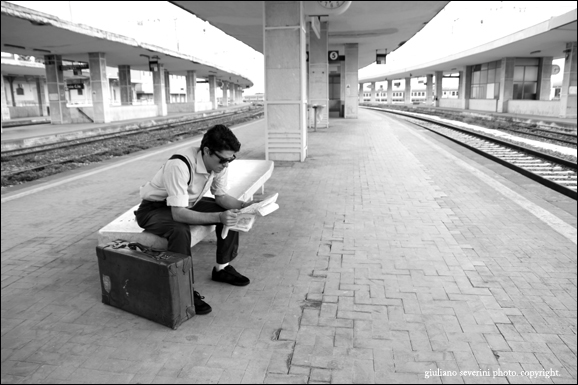 So how is your plot different from the original one?

We basically kept the part of the story that is narrated in the trailer. Alessandro (Willie in Jarmush movie) receives this phone call from a distant aunt asking him to give hospitality to Claudio (myself ; Eva in the orginal movie). Alessandro gets disappointed and doesn’t care of the imminent arrive of the cousin, he doesn’t even consider the possibility of picking him up at the train station. As Claudio arrives at the train station he appears confused as he looks at the city map and he has some troubles finding his cousin’s house. As he starts walking in town he gets more interested in skateing the spots instead of trying to find his cousin’s house.

What was the hardest part?

Setting this short cut in the 40’s was the hardest part but also the fun part. First of all we had to find all the locations and skateable spots that would fit for the purpose, so any good place that would not remind of the years we live in. Fortunately Catania, the town I live in, offers many good locations and part of them remind some old neo realistic Italian movies. Getting dressed with the same trousers, shirt and suspenders, shaving my beard almost every day, waxing my hair and day after day going skateboarding in such a way was really stressful. The first day we went out filming I felt I would get so much attention from people because of my look. Actually nobody showed to be impressed by my outfit except some older ladies or MILF (May I say MILF on abg mag?) who would keep staring at me. During the shots we did our best in order to reconstruct an old style mood made up of trains, cars, streets, far from our actual concept of city. Many people would get too close just because they thought their face was going to end in a movie. You know, that kind of people who get in front of the lens saying “Hi mom, I’m on TV!”. 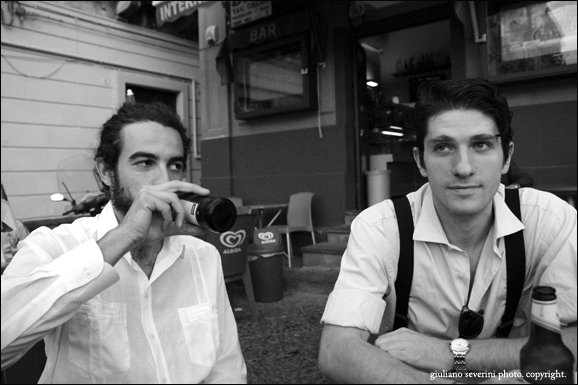 I saw you used a dolly trace; tell me something about the filming and the editing.

The filming and the editing were made by Giuliano Severini, good friend of mine, skateboarder and student in the Video Design Course of Milan IED. He used his Canon Eos 550D and a Sony FX7 for the fisheye shots. The soundtrack we used is the same of the one of the trailer and is the prominent song used in the original movie: “I Put a Spell On You” by Screamin’ Jay Hawkins. We used the dolly track in one scene only. Giuliano finished building it the same day we used it for the first time. It seemed to work pretty well, hopefully we will use it more in the next future. The editing is made by intermitting black-outs which characterized Jarmush’s original trailer. Giuliano also took care of the audio design part in order to include the missing sounds of the video.

How do you think skateboard videos are changing?

Ever since skateboarding became a mainstream product the general trend is to change the way the videos are made by. People started giving more importance to what surrounds the tricks, including filming, editing and locations. That is what’s making the secret of creativeness. It shouldn’t be all about the trick. The creative way you do or show something can make the difference.

Any possibility of a continuous of this short cut?

Anybody you would like to thank or to say hello to?

I’d like to thank Alessandro for being patient while we shot the phone call scene. It took us a whole evening; I am sure Moretti Beer kept us alive inside that room. Antonio for the little appearence scene, Thamyris for letting cars and people to buzz off while we were shooting, Marcello Guardigli for his precious instructions on how to build and use a dolly, Larry at Enimol Skateboards for supporting skateboarding where skateboarding still not really exists, Davide at Blue Distribution, Emerica, Dna Shock Skateshop Catania, you Davide for presenting the video, Giuliano for all the shooting and editing work, my girlfriend Laura, my father (“keep fighting!”) and the rest of my family.