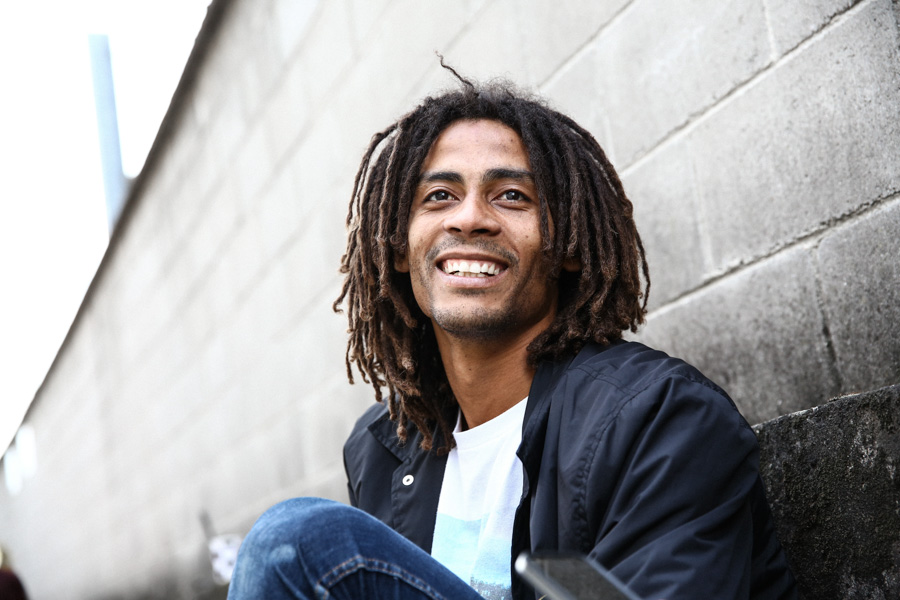 It’s always a pleasure to meet a person who is satisfied with his life, of the goals he’s accomplished and of what he’s creating. It’s a pleasure to meet a peaceful, grounded person, who lives what skateboarding has given him with ease, and takes everything not with superficiality and presumption, but with gratitude. Chris has intelligently created his own world within skateboarding with a big smile on his face, and even though he’s pro for companies we all love, he experiences it all with a joie de vivre. With two kids and a tight schedule made of constant traveling, a new videopart coming out soon, and lots of responsibilities, Chris always gives us the thrills, whether it’s skating with top pros or discovering the secret to ollie higher in a dream. It was all in a dream.

Hi Chris, how are you?

We all know that you’re from Lagos, and you grew up in Bregenz, Austria. How was the life of an African kid in a small city in Austria?

I was ten years old and I was all on my own, no parents or anything, but I was in a boarding school, and when you’re young, you find connections in a really easy and really quick manner. It took me like 6 months to learn the language. For me it was a good opportunity, ‘cause if I had stayed in Lagos, pfff… I don’t even know what my future would’ve looked like, because the situation down there was terrible. Also moving to Austria, I picked up a skateboard… so hey, it was all for the better man!

Yeah, ha ha ha. It was funny, because these kids skated, and they had ramps at the boarding school, and I would try to bike on them. The kids came over, they skated and I had to leave my bike. So it was like a bet. I was like, “Hey it looks so easy to skate,” ha ha ha. So they were like, “Yeah, if it’s so easy, try to ollie over 2 boards!” Ok! So I tried all day long and at the end of the day I was ollieing over two decks, ha ha ha. But after that day I was hooked, I was thinking, “That’s cool, I don’t wanna do anything else.”

The ollie was already in you!

Well, that’s my favorite thing to do. Ollie? it’s the best!

Well, I know it sounds really stupid… but do you have some secret or some technique to ollie that high, and with such control?

You know, when I was a kid I was jumping over things. I’ve always jumped over things… but actually, I remember one night I had a dream, that to ollie I need to jump! So when I woke up, no breakfast, no nothing, I just grabbed my board and tried ollieing like in the dream, and it actually worked! From 2 boards I went straight to 5 boards… I was like, ”Yeah, this is it,” just like in the dream.

I’ve seen you around at contests in Europe and Italy when you were really really young… I think like 14 or 15. You were on Yama, and you could skate trannies and skateparks very well. Clean style, grabs, high kickflips… when did you discover this clean and powerful style of skateboarding, versus maybe tech ledge tricks?

I don’t have the patience for tech tricks, like trying a manual over and over again. To me, skateboarding is about going fast and jumping high. It’s so much fun for me. I don’t like to practice, I just go with the flow and push it as far as I can.

And you can skate transitions too…

Of course, I try. Sometimes I get in a session with people like Daan (Van Deer Linden) or Grant (Taylor) and they start to skate… and well… I just wanna chill, ha ha ha!

Grant is born to do that, he’s so natural. His power is so unbelievable… I’m just so lucky to be on the same team as him. I can always say, “Hey, he’s my guy,” ha ha ha. 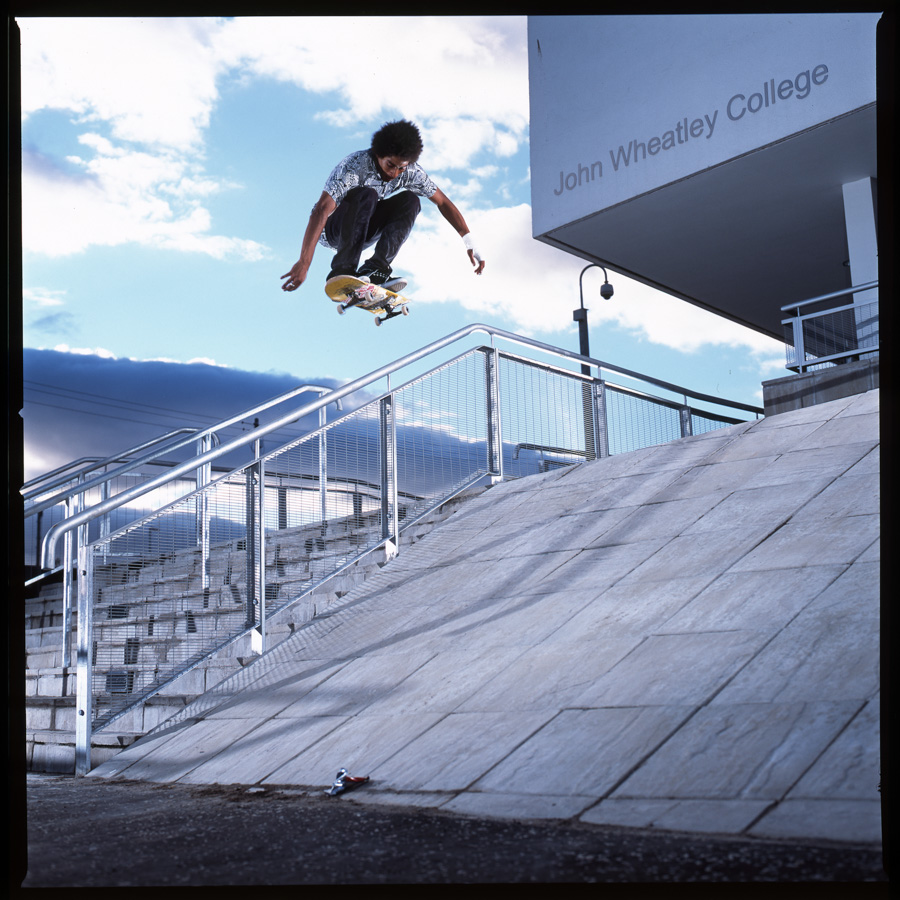 How was traveling with the Yama guys when you were really young?

When I started skating with Muki (Rustic), he was such a dickhead to me. I met him and the guys from the skate shop said, “Go skate with him,” and he was like, “Fuck no, I don’t wanna hang with the kids.” So he took me to a big set of stairs, and said that if I wanted to skate with him, I had to ollie down them! Ha ha ha. It was like 8 or 9 stairs, and I had never tried anything bigger than 4 stairs. I wanted to skate with these guys, so I decided I was gonna try, and after a few tries I landed that ollie, ha ha ha.

How was living in Barcelona for the first few years?

It was cool man, ‘cause I had just finished school, and in 2004 or 2005 I flew down there to skate. Barcelona has always been the dream place. I was getting a little money from Vans and Carhartt, so I just skated and lived the dream, you know? I didn’t need anything else, I was just skating all day long. I stayed there for 7 years, I met my wife there and we have two kids now.

I’m lucky. My wife is really supportive, she takes care of everything, ‘cause I’m still traveling a lot, so I need her help. It’s been 5 years now that we’ve been living in Nuremberg, ‘cause she’s from there, her parents are there, and we need some help sometimes.

Ha ha ha, at first it was strange. Growing up in Bregenz, we didn’t have that many magazines or skate videos. We just fed off each other. If somebody learned a trick, you had to learn that trick… as simple as that. Of course I knew the name Julien Stranger, but at first he introduced himself as “Julien,” so I just skated with him. After a while I realized who that guy was. You know, I was drinking a lot of beers and smoking a lot of hash at the time, ha ha ha.

You’ve lived in Barcelona and LA. Now you’re in Nuremberg with your family… where do you feel most at home?

Seriously, where I’m at right now, in Nuremberg! You can’t always ask for something more in your life. You have to appreciate what you do have in the moment. If you appreciate it you’re gonna be fine with it. I like it there, really good nature, great living standards, and it’s quiet! Not far away from my family too.

Apart from money… what are the biggest differences between skateboarding in Europe and in California?

Well, if you’re born and raised on the West Coast, skateboarding, surfing, and snowboarding are part of your culture. Skateboarding is something normal, you’re surrounded by it. In Europe it’s not like that. Maybe you can get into it, maybe you can go a little deeper with your passion, but skateboarding is not around you in Europe, you’ve got to go out and find it.

You’ve just finished doing the Vans video. Are there any tricks you missed?

Hmm, I had some tricks in mind, but I realized that planning stuff really doesn’t work for me; I just skate what I have in front of me and see what happens. It feels more natural to me to just go with the flow. Sometimes if you think too much about what you wanna do, once you get to the spot you’re already tired. Actually, I got everything I wanted to get… so that’s good.

You skate with some of the best skaters of all time, true legends…

I’m still a little fan! Growing up I saw these guys in videos, and now I hang out with them. I still can’t believe it sometimes. The other day I took the DVD again, and read the names on the back cover… my name is up there with all those guys… pretty unreal! 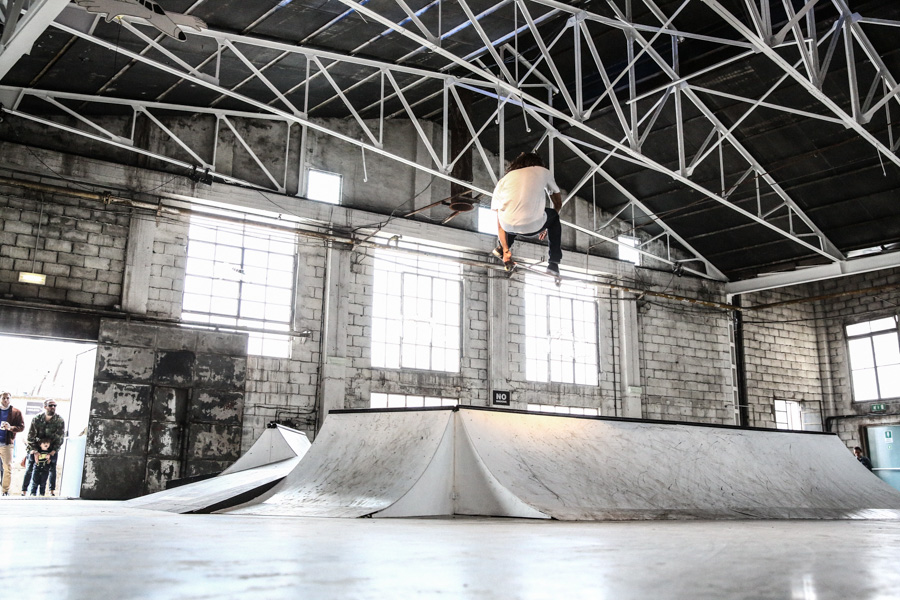 It seems like you really enjoy being in the streets, and after a trick you get a lot of love from people around you… like the old man who hugged you after the caballerial in New York…

Ha ha ha ha! I get so excited. We’re in the streets, and these people are in the streets too. So sometimes, when I try a trick, people are just stoked, and try to motivate you to land your tricks. You get so much energy from that. When I landed the full cab I was so happy that I thanked that guy for the motivation.

You’re very polite and always smiling… do you ever get mad while skating and can’t land a trick?

Of course!!! Ha ha ha. Everybody has days like that. With family and skateboarding, sometimes I get mad over little things that are so unimportant. But you’ve got to progress, you’ll never stop learning how to be in control. Things are gonna happen anyway, so you’ve just got to relax and be ready.

Can you describe your ideal day to us?

Well, I get up in the morning, have breakfast with my little man, make some waffles for him, then take him to kindergarten, then I go skate and have a successful mission, come back home, see my wife, play some more with the kids, and then when everything is quiet, I chill a little bit with my wife.

I’ve just finished filming for the Volcom video “Holy Stokes.” I didn’t have that much time like I did for the Propeller Video, but I tried hard for this video too. The premiere is in May. I’m gonna start building the house with my family in the summer, that’s it.

Thank you Chris, sorry for all these questions.

Sorry? That’s good man. People say sorry to me for the interviews all the time, but man, I’m not shoveling snow in a parking lot. It’s an easy job doing interviews, ha ha ha. Ok, let’s go for a beer.