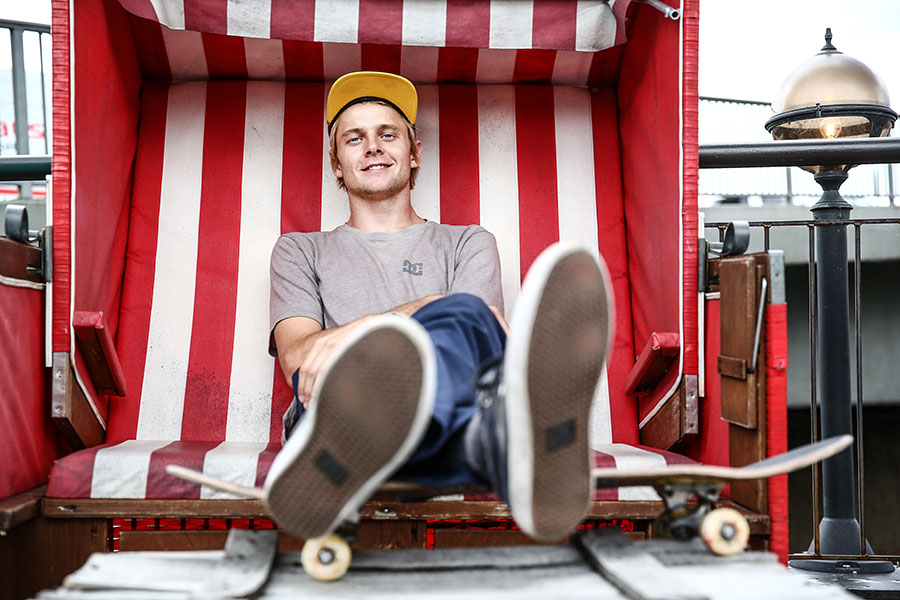 Variety is the spice of life. Is it possible that the greatest basketball talent comes from an isolated place? Possible, of course, but also unlikely. In skateboarding you may happen to find outstanding skaters in the most absurd places. Latvia? Do you even know where that is? Of course you know, because that’s where Madars is from. Now go tell your geography teacher! The fact that Madars was not born exactly at the center of the skateboarding world is something that has always been known, and now it is time to acknowledge this fact. He could’ve been born anywhere and we would still love him. Despite his relaxed attitude, and his “keep it goin’ ” way of life, Madars is everything but unwary. His casual way of skating is really the only casual thing. Madars definitely has his head on his shoulders, he’s an intelligent and cultured person who skates and travels the world as if every place he visits were his home, and he truly lives the life of a pro skater we all dream of. Because he takes advantage of this tool to meet people, live experiences, absorb it all and grow as a person, and he does so with an enviable naturalness. A naturalness that shines through his skateboarding and allows us to grasp how much energy and love he has dedicated to skateboarding.

Hi Madars, how are you?

Fine! As you can see we’re in Berlin for the DC Smoke on the Water event with the DC team, and it’s a beautiful day.

How did a kid from Latvia discover skateboarding?

When I was 9 or 10 years old, they built a skatepark next to my house, so I started rollerblading, BMXing, and skateboarding in the end was the best, so I chose skateboarding.

How was the scene back then, and what is it like now?

The scene is getting much bigger now, and is much better than when I started skating 15 years ago, but the older guys still skate, which is awesome to see. I missed a few years in 2008 when I moved to Barcelona, but the scene is good and there are a lot of nice spots if you wanna visit.

I wanna skate there for sure. After your “success” did you notice a difference in the scene? Like for example, new kids ripping because you made your way up to the pro ranks, and maybe they’re thinking that “they can make it” as well?

Now I see on the streets, there are a lot of little girls, like 12 or something, and they have started skating. They’re almost more numerous than the boys, but definitely the scene is getting bigger, we have skate-schools, skate-camps, and we have a good indoor park for the winter time. A good indoor park is always a good thing.

When did you discover the European scene?

Hmmm… I started skating in 2001, and in 2003 it was my first time out of the country. I went to Estonia for a skate contest, and there I met great skaters from Finland. After that I went to Munster and to the Mystic Cup in Prague where I saw Rodrigo TX skating. But I saw great skaters all around these contests. In 2004 I took the first trips around Europe. I was with the Element team in the Hotel, and the Element TM was also there. Element was the first sponsor to help me travel by giving me some money. At the time, my city helped me to travel to contests as well. The city council gave me some money so I could go to the European contests. The Latvian Skateboard Federation did a really good job. Obviously my parents were super supportive, so that’s how I ended up on the European Element team.

Everything fell into place, step by step. You’re not a contest skater. You worked a lot to be pro.

I started getting some interviews in the magazines, maybe a photo. After the interview all you had to do was make a videopart and if it was good everything worked. If you’re with the right people and the right team, and you work hard, you can get something from skateboarding.

And you’re pretty loyal too.

Pretty rare nowadays, did any sponsors ever try to steal you?

Everybody knows I love Element, and that I’m an Element kid, you know. Nobody tried to steal me, hahaha.

Don’t you get mad sometimes when they make fun of you because you ride for RedBull? Like in Thrasher they said something in a photo like “no logos in sight.”

Hahaha… I don’t care. But at the same time I do care about it. I don’t wanna wear the cap all the time. I wear it at events, contests, or during RedBull trips. I try to find a good balance, and I’m really thankful to RedBull for sponsoring me, because they invest a lot of money in skateboarding, and they’re doing good things for skateboarding. They create some cool events, and they have a great team.

I like the way you skate, because it looks like you don’t put a lot of effort into your tricks. But I know that you have worked hard at skateboarding to get this good.

I try my tricks for a long time and I’m still trying to learn how to skate. Skateboarding is hard.

Skateboarding is fun, and I skate the way I skate ‘cause I’m having fun with it.

That’s a good thing. Now that you’re pro, are you still “hungry” to skate like when you were an AM?

I’ve got a pro board out right now, and I hope it’s gonna sell. So I have to keep doing it. My goal is to produce good videoparts.

Have you already said no… like I don’t wanna go there because I’m tired? 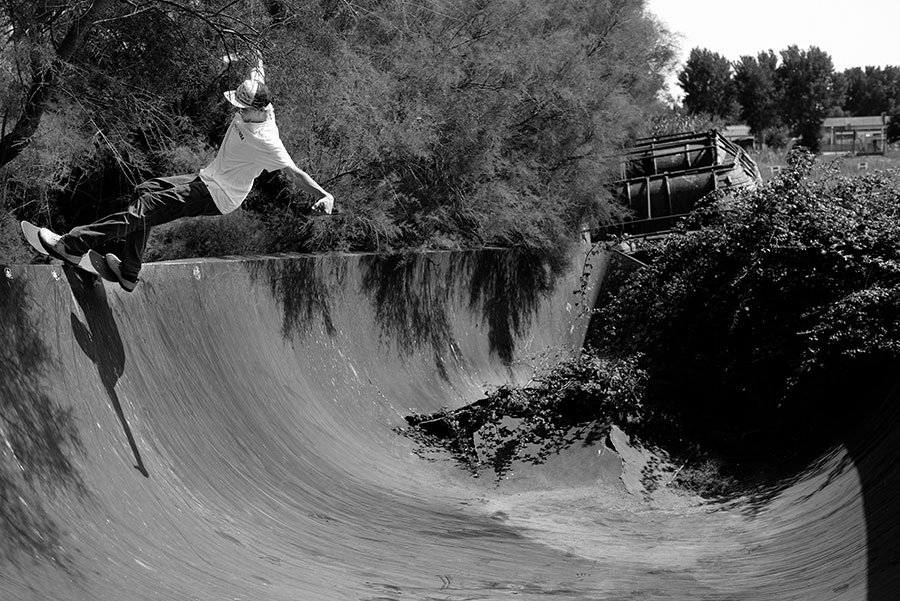 Your It’s a Mad World series is so funny. Is it hard to find ideas for the series?

I started filming for the series like 8 months before the first episode, I was going on some trips with my friends, and it’s good when a filmer comes along, so I can get some footage too, but it’s hard. At first I was super scared, ‘cause it’s 24 episodes in 1 year. Now it’s over, and we’re trying to work something out with a new channel maybe. It will continue.

I hope so! I know you injured your ankles for a long time. Was it hard to not skate when you were at some unbelievable spots at the other end of the world?

Well, basically if I hurt my right ankle, I only do tricks with my left ankle, but it’s hard. Sometimes you have to force yourself to take some days off to chill and relax completely, work on yourself, do elevation, stretching. It’s hard to watch other people skate, I love skateboarding and I really like to do it, but I know how not to skate sometimes.

Do you work in a gym or with a chiropractic to get better, or do you just wait until your body works again?

I’ve tried a lot of things to get better sooner. I try all the advice I get from other people. I listen to it, and I try. My mother says things like, “put ice on it, or put a vodka compress on the ankles.” Things like that, and I try it all. My girlfriend is a doctor, so she always makes fun of me for my experiments to get better sooner. I’ve tried everything, physiotherapy, acupuncture, and one year ago I exercised everyday. I’m 25 and I have to take care of my body, my ankles don’t get well as quickly as they did when I was younger.

Skateboarding takes you everywhere around the world… what is one of the craziest places where you thought “I skateboard, and I’m here… how did this happen?”

Bangkok for sure, or Thailand! Every place has its own beauty, you know. But as far as I travel, to New Zealand, Argentina, or anywhere else, I sometimes still feel like I’m at home, ‘cause it’s still the same smell around. But I’m definitely super thankful for these opportunities. I’m a big fan of geography so I’m excited to travel. A lot of times you just see stairs, rails, ramps, but sometimes we have 2 or 3 days of chilling, so I can see things outside of skateboarding.

Where are the craziest parties?

Hahaha! Italy for sure. Five years ago I had the worst hangover ever. I try to not drink like that anymore, hahaha.

Hope to have you back soon, hahaha… What’s your ideal situation, what makes you feel happy?

Basically it depends on you and yourself, and how you look at everything around you, you know? Happiness is something that comes from within you, not from something outside of you. I’m happy to be around my friends, my family, and I’m happy to travel and meet new people. It’s people that make this world happy, I guess… and also sad as well.

I’m on tour with the DC team, and after that I’m going on vacation with my lady to an island called Porto Santo. I’ll take my board for some hill bombs, but mostly it will be walking in the sand, swimming in the ocean, and just chilling, taking some time to heal my body. After that, I’m going to the U.S. to film a new commercial with DC Shoes that hopefully is gonna come out in September. Maybe film something for the Element video too.

Bomb some hills and swim everywhere you can, as you’ve done in pretty much all the It’s a Mad World episodes…

Hahaha! Yes, it’s fun. A friend of mine once said, “The future is in the water.” And I really believe that.

Thank you, it was fun.