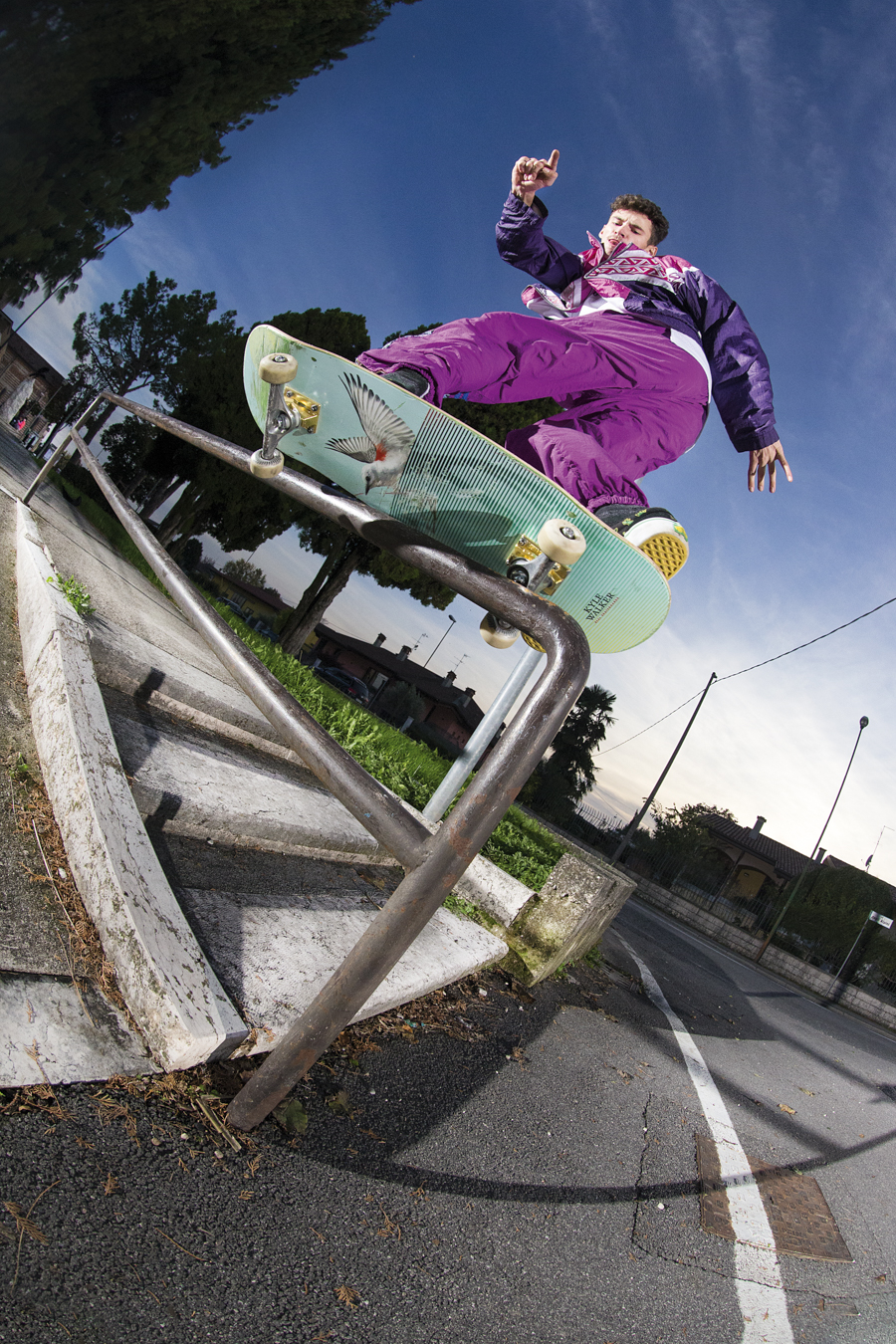 Among the newcomers around Benjamin is the most talented at the moment who hypes me the most. Technically he’s very good, and seeing a skater like him in this era is almost a relief. (Fabio Montagner). 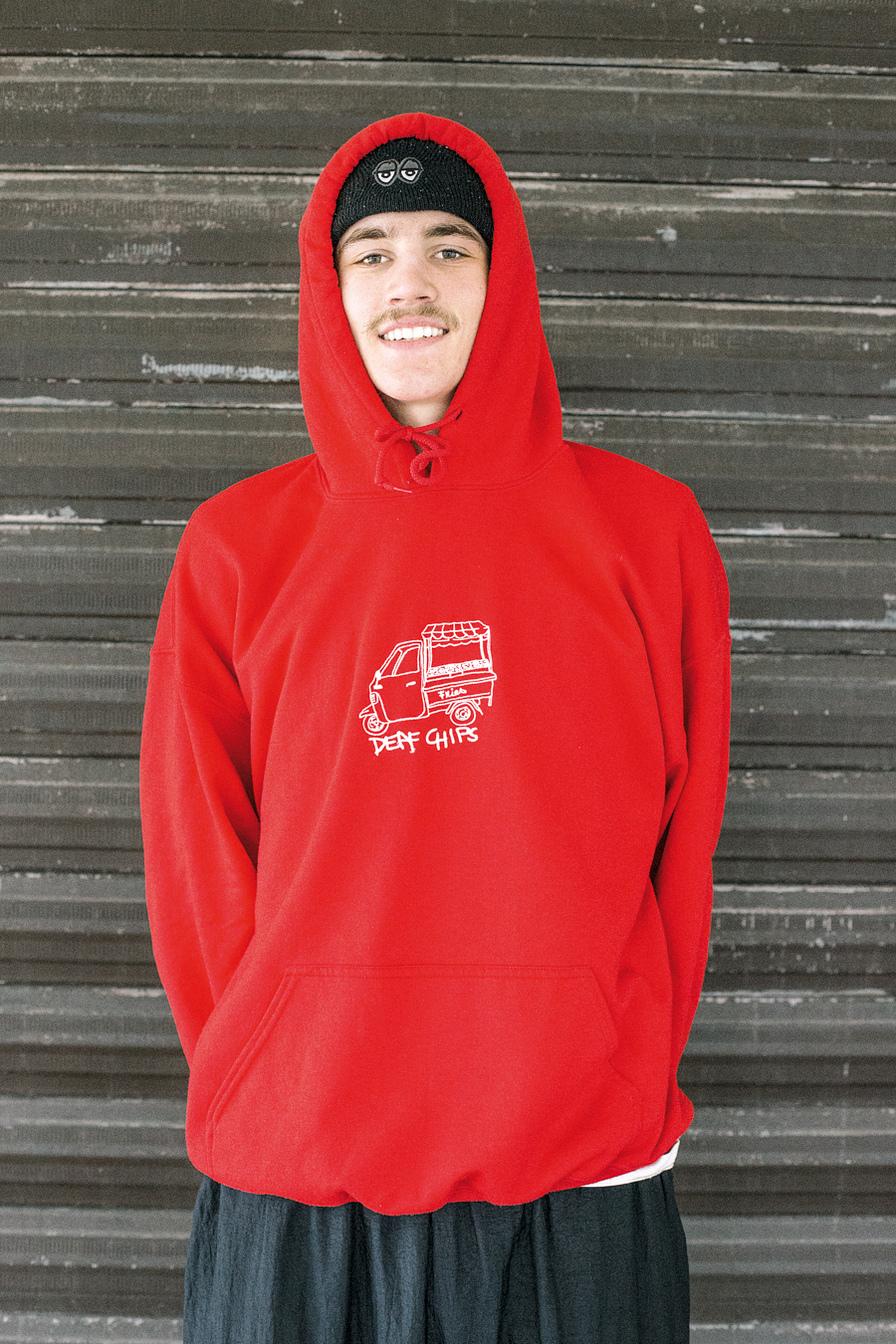 Hi Benjamin, how old are you and where do you live?

Do you ever go to Poland?

Yes, I haven’t gone in a couple years unfortunately, but I’ve been there lots of times. My father is from Szczecinek, a small city. I like it a lot, even though it’s not that great for skateboarding.

In Bolzano there’s a super solid skate scene with guys like Davide Holzknecht, Massimo Cristofoletti, Giuseppe Cola, and all the other boys. Who’s the best right now?

True, there are lots of people killing it lately, my favorite is Tobias Gesser (tshegl on Instagram). Every time I skate with him I get really hyped.

How long have you been skating for?

For 10 years, even though between the ages of 10 and 11 I didn’t skate much because there was no skatepark or anybody street skating.

Do you think the tech level in skateboarding today is higher or lower than it used to be?

It’s higher, every day I find videos on social networks of things that would’ve seemed incredible only a few years ago. But today there are so many super talented skaters that it has become almost normal! 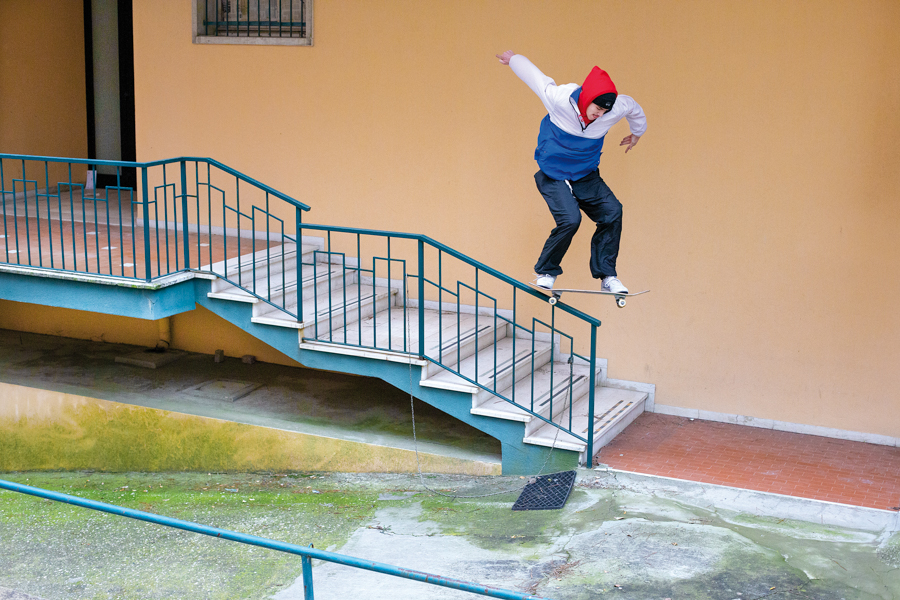 In skateboarding today what’s more important, a skater’s image or the difficulty of the tricks he does?

I think the image is more important. There are thousands of skaters who don’t have a sponsor but fucking kill it. Even though I believe that if your trick level is high enough sooner or later you’re going to get noticed.

Is it true that you flunked school three times?

Yes, it’s true, for various reasons, one of which is definitely skateboarding, ha ha. I can’t change the past, but I can try to finish school.

You’re in a school with a course of study in sports, do you like it?

Yes indeed, because it’s a professional school for sports and tourism, so it isn’t too difficult and I have free afternoons to go skating. We do physical education in the gym and in the classroom. We do theory in class, studying how the body works, and the muscles, etc. We also study everything related to tourism and being a receptionist in a hotel or a travel agency or other jobs in the same field. I can always look 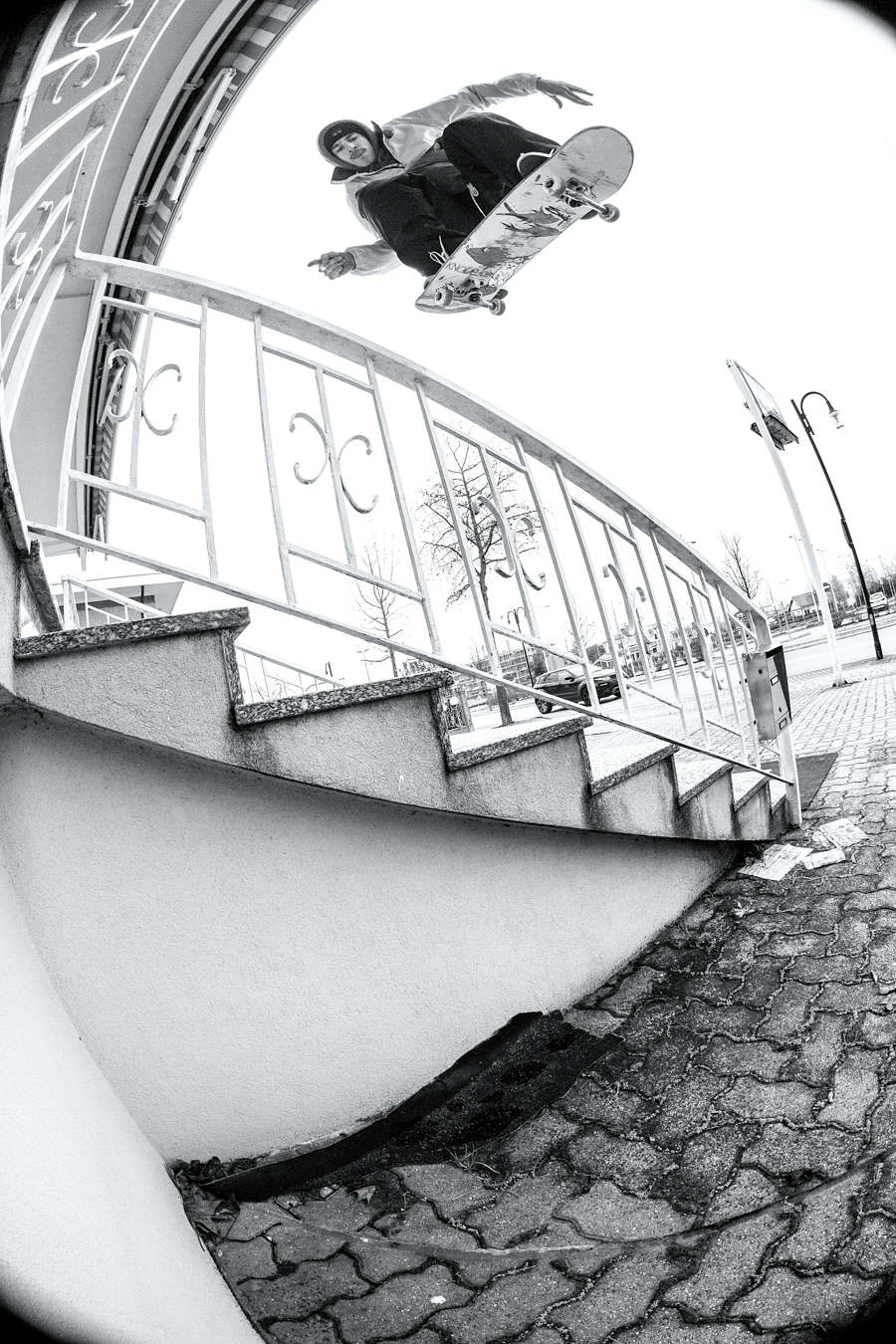 Backside ollie over the rail.

The photos in this interview were all shot during random sessions, without really planning anything. Which tricks are you most satisfied of and why?

Probably the switch back tail, because even though it looks easy, the spot was pretty hard to skate, both the ground and the ledge, ha ha. So I’m really happy that I landed it.

When you were small what did you want to become when you grew up?

I’ve always wanted to skate, not be a “pro,” but be able to live from skating and do what I’ve always loved. Obviously it would be nice to earn enough to support my family and bros!

Hmmm, with Tyshawn at L.E.S. Skatepark in NYC so I could see him in real life. I respect him a lot and would like to see him skate in person.

I know you really enjoy going to Barcelona and have been there various times, even in low budget situations, right?

I sure have! Barcelona is the best city for the good life, ha ha! But you need enough money. Last year I wanted to find a job there, but I was a minor and in Spain you need an ID and have to be of age. I tried anyways but with no success, so I stayed there with no return ticket until I could find a way back. It wasn’t exactly my dream vacation, ha ha. But I can’t complain because I learned a lot, especially when it comes down to who to trust when you’re really in need. What I like the most about Barcelona is that people mind their own business and don’t care who you are or where you’re from. Everybody is equal.

Now that everyone is his own skate media thanks to Instagram, does it still make sense for skate mags to exist?

Yes, of course! There have been lots of changes in skateboarding but we should never forget what created it and made it develop into what it is today: the brands’ mags and videos. My generation grew up with magazines and video parts, not Instagram, so I hope mags will keep being appreciated. 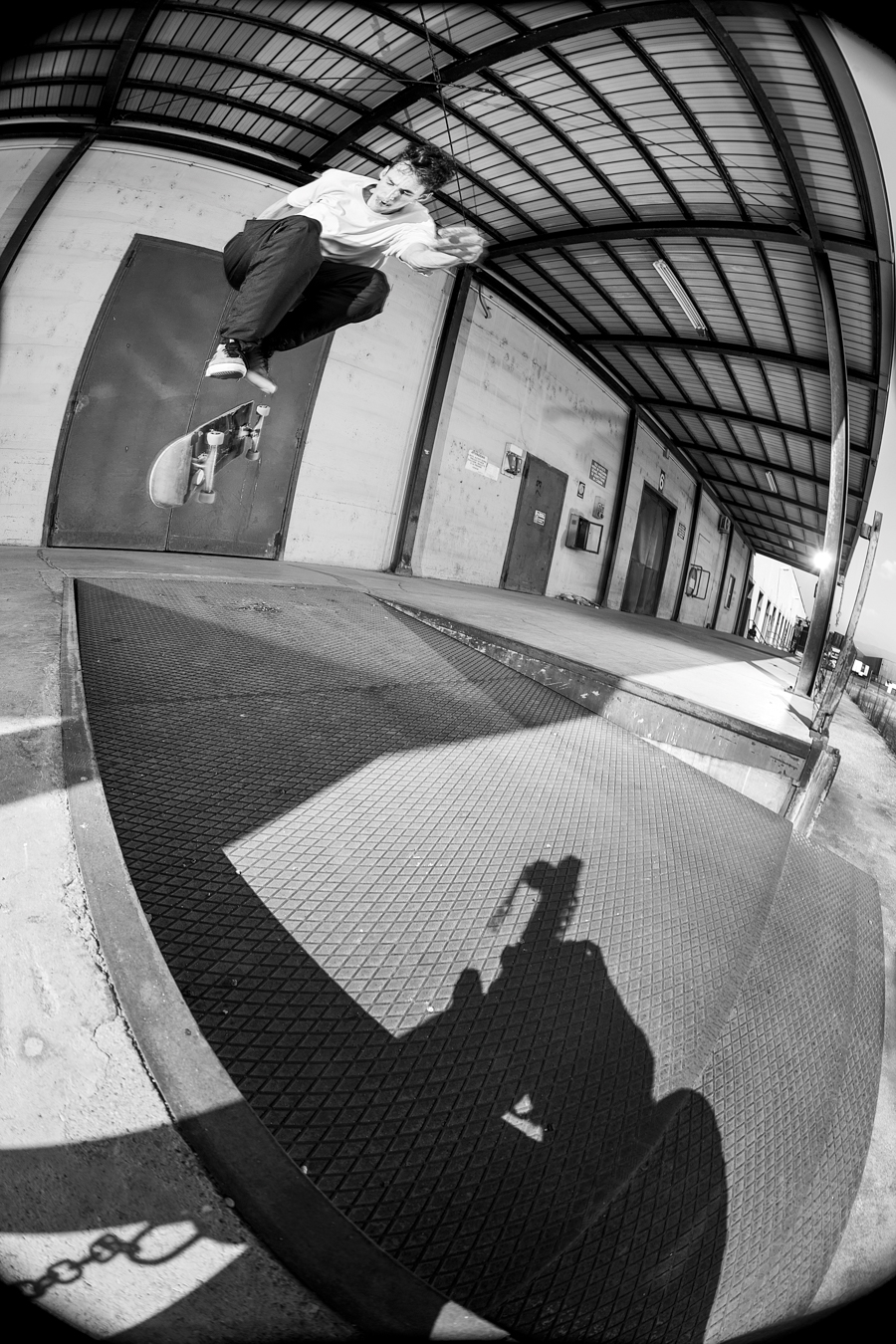 We’re now in the midst of the second lockdown of 2020 and Bolzano is a red zone, how are you coping? Are you able to skate in any way?

Actually if you don’t watch TV you barely even notice it. I go to the skatepark as usual since they haven’t closed it. I just hope they don’t lock us at home for another month and a half because I don’t know whether I could handle it!

You used to skate for Lakai and Deaf Chips Skatebaords, but you were telling me that there have been some recent changes regarding your shoes and boards…

Yes, I left Deaf Chips a while ago because I wanted to find new motivation and move forward, so I found something I like which should be official soon but I can’t tell you much yet. A few days ago I took a painful decision and left Lakai after riding for them for some years. They’ve always supported and treated me very well and I thank them for this. I was asked to skate for Vans and I accepted. It was the right thing to do to find new motivation.

I definitely want to travel, I wanted to go to the US with Davide Holzknecht this fall but weren’t able to because of the Corona. I’m having a short part out soon with some clips I filmed a while ago, then I want to start filming something new and work on a more serious part. 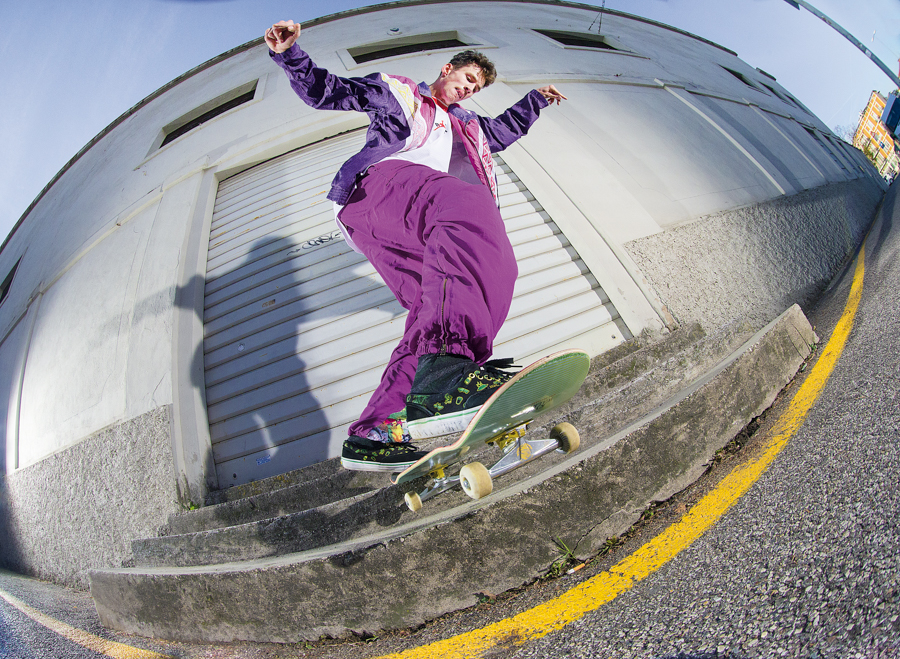