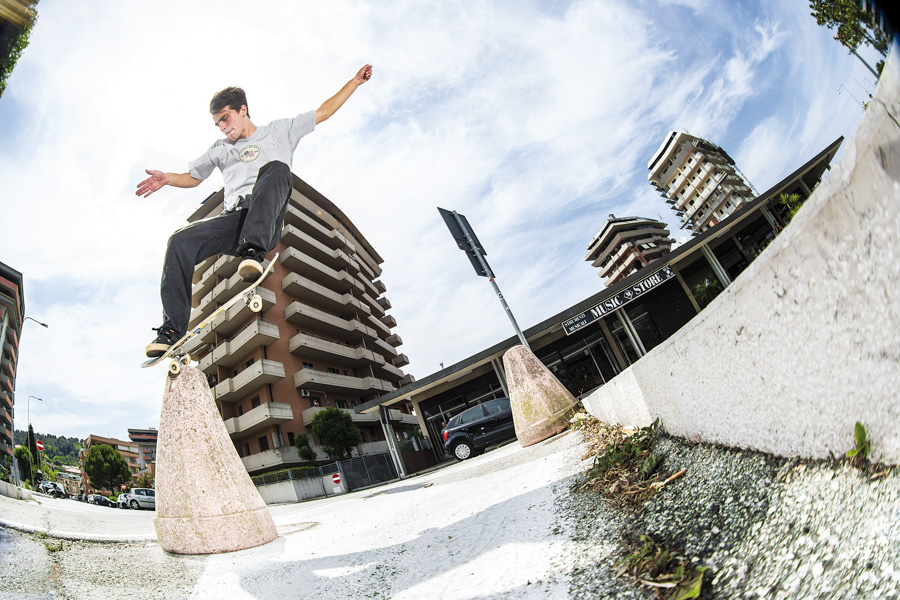 In what year were you born?

When did you start skating?

How did you get involved in skating?

I started skating in Davide Rossano’s garage, we would drop down the slope! Dado already knew how to do kickflips on flat, and we used to go to “Cimi,” our spot. Dado was the first guy of our crew to skate.

Of your original crew, does everyone still skate?

Almost all of us, some more or less intensely. Lately I always skate with Cise, Gibbo, and Mia, Mattia’s sister. She’s in London right now and is starting to rip.

Where do you live?

I live in Pesaro, Italy.

Of all the places you’ve been to, where would you like to live?

This place in Germany I’ve been to recently, near Wuppertal, next to the border with Holland. It’s a relaxed place. I really liked London a lot for skateboarding, but I couldn’t live there, it’s too chaotic for me.

The skater who hypes you up the most at the moment?

Maxime Geronzi is my absolute favorite skater, and I like Tiago Lemos too. When I started skating, Marco Lambertucci was the best skater there was in my eyes. Once, when I was small he gave me a pair of shoes and made me the happiest kid on Earth. I don’t follow many skaters, I don’t spend much time on social networks, I just look at my two or three favorite YouTube channels and that’s it.

A Millennial who doesn’t use social networks??? Are you crazy? Ha ha ha.

Ha ha, yeah of course I use them, I also spend time on them, but not that much to be honest. I’m just not that active on social networks.

What’s your name on IG?

When we were younger, each member of the crew had a strange name, so I had to find one for myself! Ha ha @freshparis_ sounded good so I kept it. 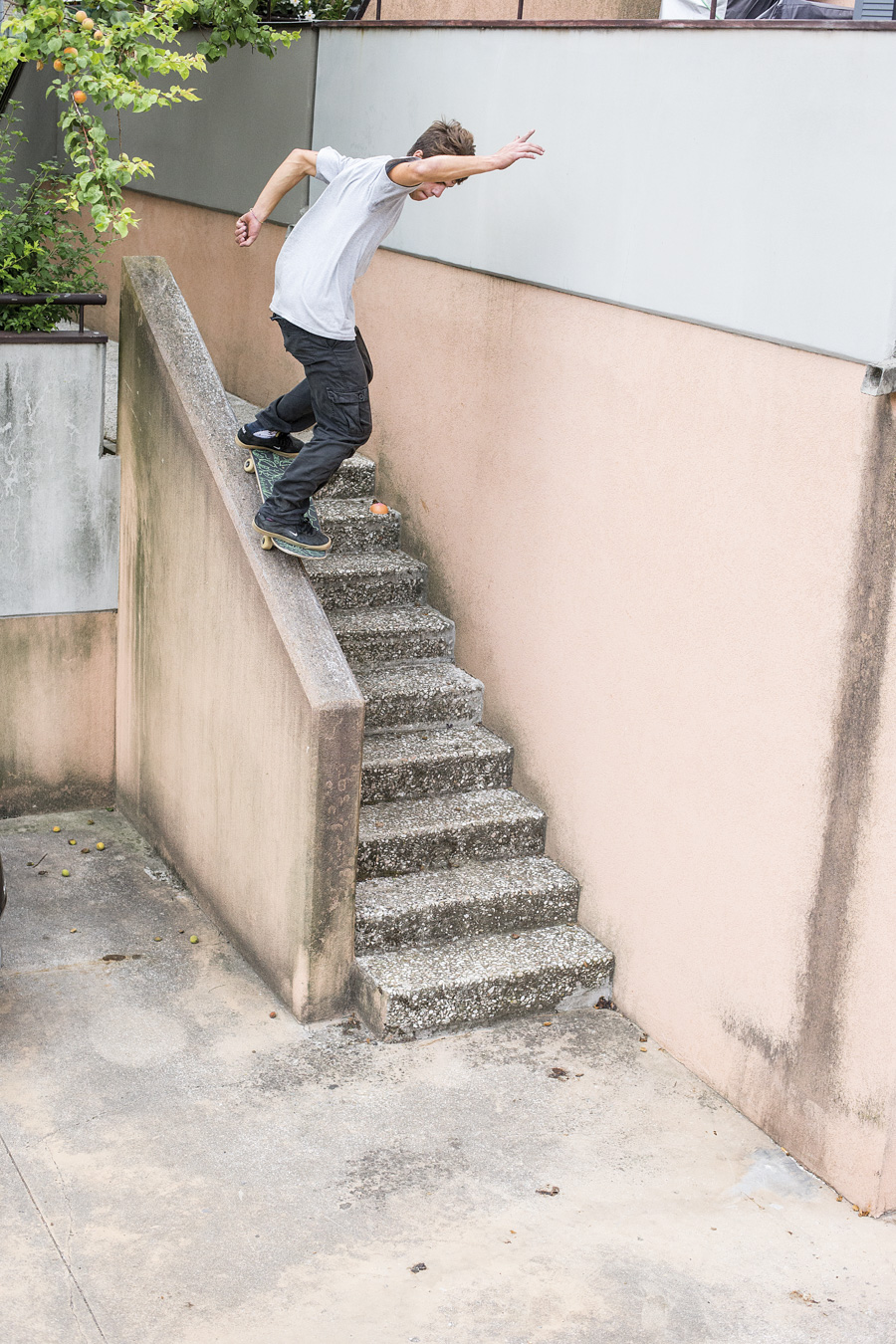 How often do you manage to watch a full-length video with multiple video parts?

I’ve watched many full-length videos numerous times, if I like a video I’ll even watch it 20 times.

The first skate video you ever watched?

A local video called “Locum” which was really cool.

What videos do you watch before going out skating?

Any video with Max Geronzi, I must have watched his part “Max is Pro” at least 50 times. Same for the part where he skates an 80s board. I’d like to skate like that. Even the “Gypsy Life” part for Cliché hypes me up so much.

What do you think is more important in skateboarding nowadays, the tricks or the image?

I think tricks are more important, but every skater has his own style, there are some who tie it better to the trick they do, then some do fewer tricks but super stylishly, and then there are those who do a hundred tricks, but with a less smooth style… tricks and style are essential.

Do you have any sponsors?

Big Air Lab, and the skateshop in Camerano supports me with some boards and product.

How shitty is Trap music?

I think they should erase it from the face of the Earth! Ha ha ha.

What music do you listen to?

Old School Italian hip-hop, but Italian 70s and 80s music too; I like Jazz, but I listen to everything really.

What else do you do besides skating?

I go to school, I want to finish that, then I’d like to work in skateboarding, I’d like to open a skate shop.

Have you bought more boards online or in skate shops?

Skate shops for sure, I don’t like buying boards online, I need to put my feet on a board, pick it up, look at it, feel it.

What do your parents think of the fact that you skate?

My mom wasn’t too happy at first. I tried many different sports, from football to fencing, but skateboarding was the only one that really caught on. I don’t think it is a sport, I can do it whenever I feel like it, it’s something constant, I can go skating at 3PM or at 3AM, that’s what I love about skateboarding. 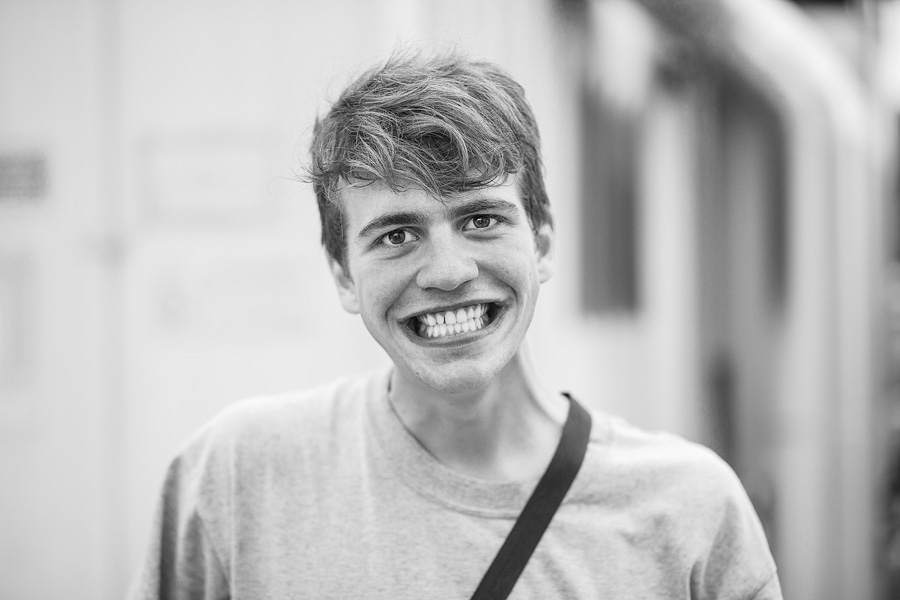 No, I don’t feel at ease when I skate in them, I feel much more at ease falling on the asphalt and destroying my back or going out with a filmer and a photographer to a street spot to wreck myself.

Yes, very much, we are very fortunate to have Matty Tommasoli who films and motivates us, he has always hyped us and brought us around to skate with older dudes like Lamby or Skiro, guys who know the deal… when we were younger. It’s thanks to him if we skate like we do today.

Did you realize all there was behind skateboarding? The tours, teams, the non-written rules, the tricks?

Absolutely not. Football is nothing compared to skateboarding, where there are thousands of things, and as time passes you learn more and more. There’s always something new to discover in skateboarding, that’s why I love it so much. You don’t get bored with skateboarding, especially if you’re stubborn and try a trick until you’re exhausted, ha ha.

You can’t just fake it or skate every now and again.

When you skate you think about it all the time, my mom sometimes says, “You’re bonkers” because when we’re in the car I always tell her to stop all of a sudden because I see a spot and have to check it out! Ha ha.

Have you ever picked up girls thanks to skateboarding?

Yes. This one girl who used to come to our spot and check us out from afar, then through IG we hooked up.

What did you dream of doing when you were younger?

Conve, who’s a young kid that’s been skating for a year and a half and really rips. His motivation goes beyond everything else,  he wants to skate 24 hours a day, he’s almost 14. I met him one day at Cimi and since then he always shows up, he learned how to kickflip in one week.

Do you have any projects in the works?

Yes, we’re filming lots for a video part, but with Matty, who is always busy. I’ve saved up some tricks, but I would like to do a good job so I prefer to wait some months and do something dope. We should be done within the end of the year or by the beginning of 2020. The video we filmed during the tour to Germany some months ago should also be dropping soon.

From the “Get Your Shine On” article published in a brief glance issue #56.