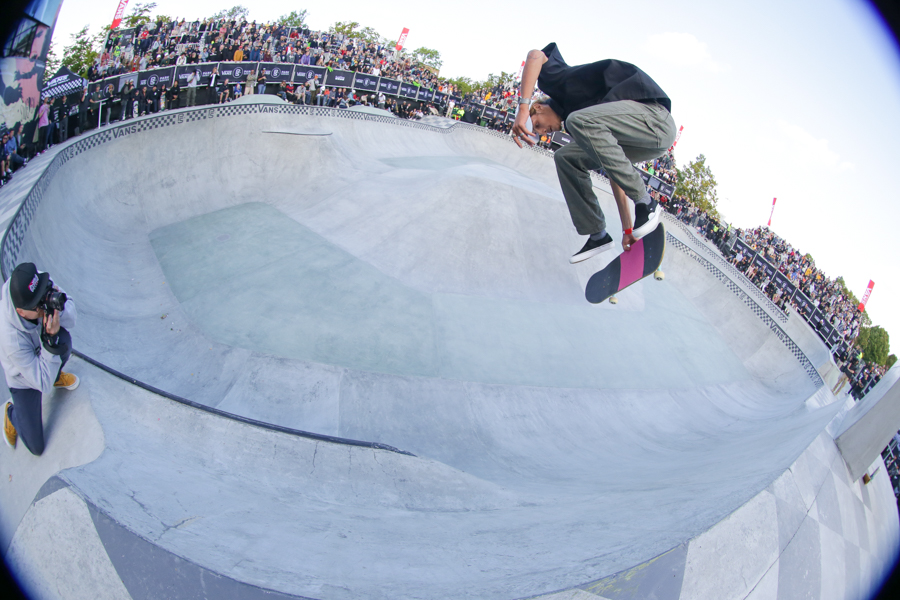 On the occasion of the latest Vans Park Series event in Malmo we had the chance to have a little chat with 19 years old Italian ripper Ivan Federico who gave us an insight about the life of a pro contest skater, about spending most of the year traveling around the world, about skating for Welcome and getting injured and not having time to recover properly.

Hi Ivan, how’s it going?
I’m doing ok, I sprained my ankle during practice three days ago, so I hope to be able to skate today.

You’re participating both in the Vans Park Series and other contests as well. What are the main differences between them?
I’m taking part both in the Dew Tour and the Vans Park Series. The Dew Tour only takes place once a year, both street and bowl, and they try to organize a large event in one contest: the bowls are very big and have different obstacles every time, they incorporate both street and bowl in the same course. The Vans Park Series is composed of five competitions that take place throughout the year and around the world (Brazil, USA, Canada, Europe), and the finals will take place in China from the 26th to the 28th of October.

You’ve been skating contests for a long time, and we’ve seen you grow: of all that you’ve accomplished up until now, what makes you the proudest?
I don’t know… one thing that made me proud was being included in the select pro list for the Vans Park Series, because it’s the largest and most important contest in the world. Winning the comp in Vancouver made me really happy and proud, because I came in ahead of Pedro (Barros), Alex (Sorgente), and Corey (Juneau). I would never have imagined it. In that moment I thought, “ok, I can make it.” I realized that maybe I can be like them, and try to skate at their level. Mentally it was an important moment for me, that gave me much more self-confidence regarding my potential.

You guys all go from contest to contest together, are you guys a good crew?
Yeah, it’s a huge group of guys!!! We party together, we skate together, we hype each other and learn from each other. It’s a contest, everyone wants to win and skate well, it’s just skateboarding, you have fun with your friends, somebody wins, but the idea is to progress. It’s dope and I like it.

You’ve been skating for many years now, how many exactly, ten?
More!!! Fourteen years.

How old were you when you started?
I was three or four years old…

Oh my god! Ok, but you’ve grown up a lot and now you’re looking forward to the Olympics.
Those are gonna be awesome, I have to prepare myself both mentally and physically, I’m going to Brazil this winter to reinforce my body, because I found a personal trainer there that will work with me, and also to recover from my injuries, because being on tour all the time, I don’t give my body enough time to recover. I’ll spend one month in Brazil, then I’m going to Cali to film a video part with Chris Gregson, I hope to be able to do something cool. I’m gonna try.

You skate for Welcome Skateboards now!
It’s almost official… I’ve been on the team for a few weeks. They sent me boards and asked me to try them out, because they say they’re strange and they want me to feel comfortable skating them… they are awesome!

I can confirm… PS Stix never misses a shot.
The boards are cool, now they’re trying to put me on the official team, we’ll see very soon, I hope all goes well because I really like both the boards and the team. 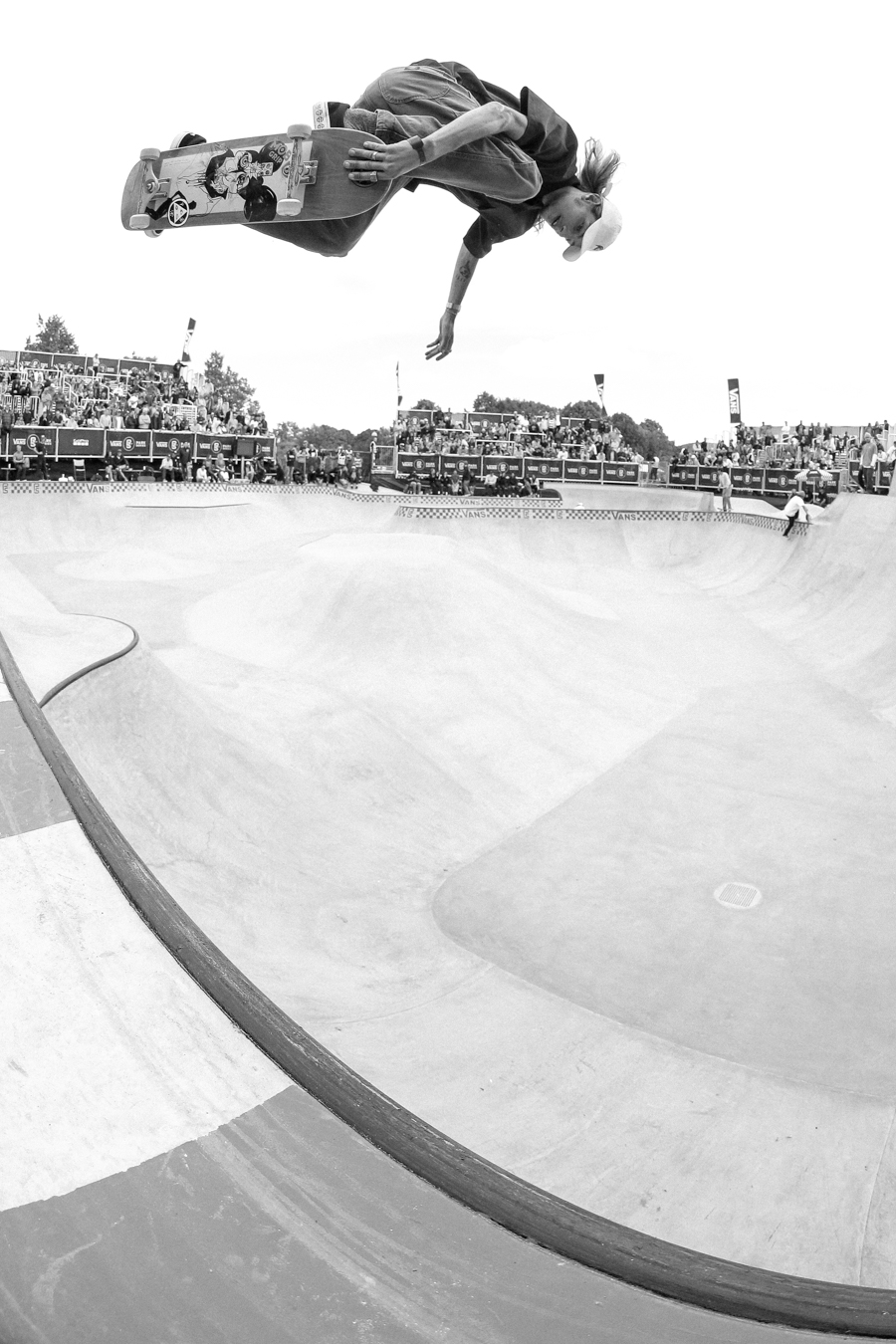 How’s life as a pro contest skater? You have at least ten contests a year to do.
Oh, it’s more than ten, this past year I did many more than that.

It must not be easy to skate, do contests, travel around all the time and try to progress in skateboarding.
It’s tiring. The problem is that you often get hurt and would need some time to recover, but you don’t have the time because you want to do contests, so you end up not skating as you would like to. You want to learn new tricks and push your skateboarding to the next level, but you have to deal with injuries, jet lag, and eating badly… so it’s not easy. But if you see it from another perspective, as I do, it’s awesome, because every month you’re in a new, fantastic place, like China, Brazil, the USA, and Europe, you live an incredible life, you’re always traveling, skating with talented people and you have fun. Of course, you have to put in work, but you live an enviable life. You have fun, you learn, travel, then contests come about and you have to focus, you do your thing and you try not to think about anything else, you go to bed early, you put ice where it hurts… you do everything you can to keep in shape.

You’ve grown a lot over the years, and seemingly not only in height but also in self-confidence. I see you much more confident with your tricks, you don’t need to try out the park a hundred times, and it seems like you know where and when to blast a certain trick.
It’s been a couple of years, that I’ve learned to give my best in a new park, even if I get there just a few days before the contest.
By doing contests, you manage to optimize the parts of the bowl that interest you, and do your tricks and lines. It’s mental.

What’s the most important thing during a bowl contest apart from the flow?
Let’s call it “strategy.” Basically, during the semi-finals I try to save some hammers for the finals. In the semi-finals I try to do powerful tricks, but I try to save the really difficult ones for the finals, because you can’t always do the same things in all your runs, you have to try and surprise the judges and spectators. so you have to save some difficult and unexpected tricks for the finals.
You also have to try not to distract yourself too much, because ok, you can win a lot of money, but if that’s what you focus on you get distracted.
I have to focus on myself, I don’t want to think about winning the money, I want to think about skating well, doing my best, having fun, and being satisfied with myself and with how I’ve skated. If I focus on all that is not skateboarding, I don’t have fun, I don’t skate well. I’m not happy. I’m learning to deal with the pressure and stress. I’ve often obsessed over certain tricks that I didn’t make during my run, for example, and this just ended up making me lose my concentration. Look at the way Oski skates! He skates freely, throwing down random tricks and if he lands them cool, otherwise no stress. And he always does incredible things, he’s just incredible.